Photography is for the Birds

Posted on August 11, 2019 by nelsonearthimages

It has been a while since I concentrated on one of the most popular
subjects for serious nature photographers, birds.  Today’s images as
per usual, were grabbed from various folders hap hazardously without
any real thought, except of course for the fact that they are all
avian cousins so to speak.

I have tens of thousands of bird images, so any random sampling is
just that, a sampling.

I looked at which way I should approach this. By bird species? By bird
type such as wading bird, songbird etc.?  Maybe type of image such as
portrait, flight?  I decided I would only loosely organize the images,
meaning that we will revisit action etc. multiple times. I may show
you some shorebirds, and then show another one in a separate category
etc.

One of the most satisfying sorts of birds to photograph, are
waterfowl. If you are in a car or sometimes even if you are in the
open, if you remain slow and deliberate in your moves, you can spend
hours making images of a wide variety of subjects. Birds like ducks,
grebes, mergansers, loons, geese, swans etc., will tolerate you if you
begin slowly.

I photographed both the Male Red-breasted Merganser and the
Pied-billed Grebe that you see below, from my car. They were perfectly
accepting of me.

One of the great things about water birds that swim, is that the way
they move back and forth and to and fro, will give you opportunities
for great compositions.  You can move them around within the picture
frame and be a little creative.

If you are fairly close to your subject, even if it might need a small
a crop when editing, compose your subject anyway. If you know an
editing crop is eminent due to the subject‘s distance from you, then
leave as much space around your subject in every direction, as you
can. You can decide your finished composition at home. 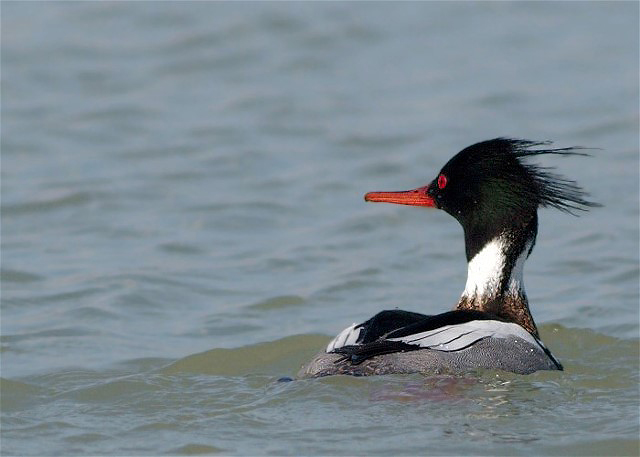 Behavior/action, especially feeding, make waterfowl perhaps the
easiest type of bird to capture in images with supper in their mouth..

The first bird below is a female Greater Scaup with a Mussel she
captured.  The second is a Horned Grebe of either sex, with a fish. 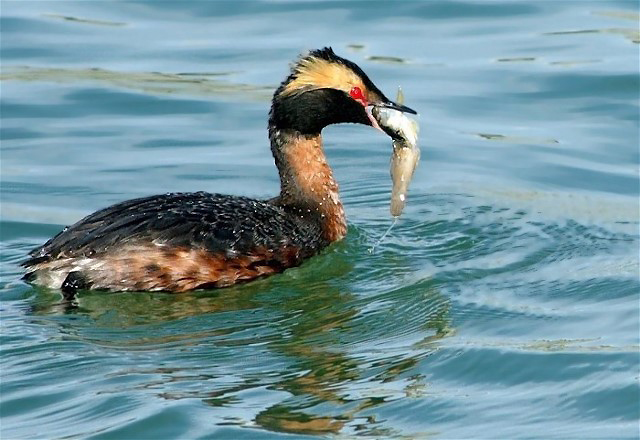 Of course, preening is something that all birds do as a matter of
survival. Even ducks like this male Common Goldeneye with their water
repelling feathers, still need to keep their flight feathers in shape. 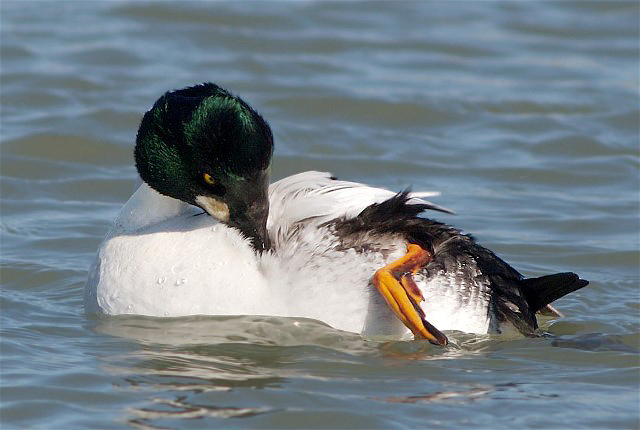 Shorebirds are the hardest, and the easiest birds to photograph.  They
can be incredible nervous and suspicious of anybody, especially
photographers if they are even moderately close. They take patience to
photograph.

Eventually, if you exhibit volumes of patience, entire flocks will
tolerate you out in the open and in the middle of their
hunting/scavenging area. Be careful they are “primarily” group birds
and it will only take one nervous bird to send the whole flock, and
maybe those other two flocks nearby, into flight. Take heart, if they
were having success finding food, and if you wait patently and
quietly, they will return. I have had (eventually) a Ruddy Turnstone
walk on my leg and foot as they traveled along a shoreline.

I believe this is a Black-bellied Plover in winter plumage. 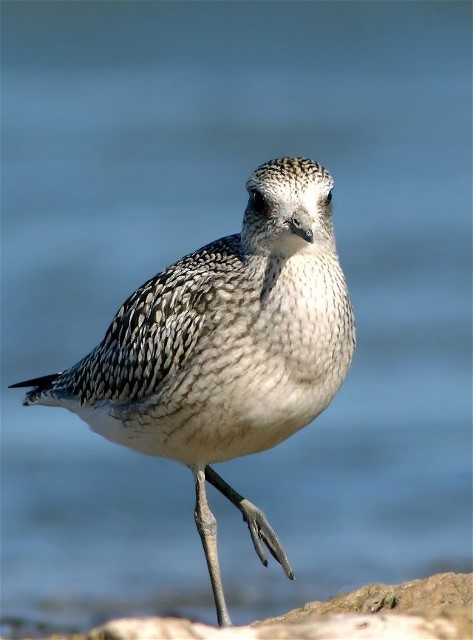 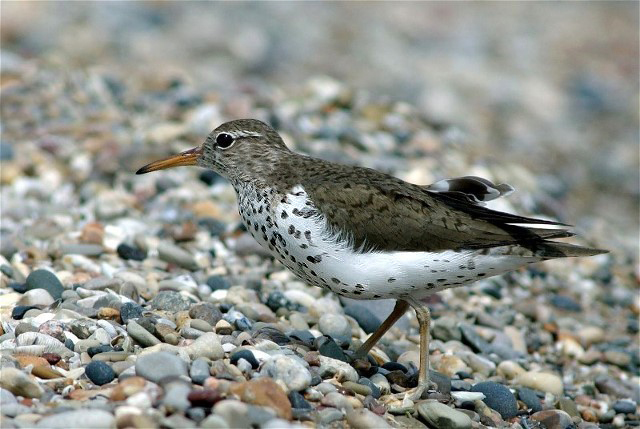 There is always nice behavior to be had with shorebirds.

Below we have first a Ruddy Turnstone doing a little stretching. This
is one of my favorite birds.  Next we have a Wilson’s Phalarope in
foraging/hunting action.

Ah, but there are so many types of birds that are connected to water habitats.

Below is a mated pair of Double-crested Cormorants.

Next we have an action/behavior shot of two Caspian Terns. A male is
offering a fish to a female as a courtship gesture. I would suggest
the one on the right is the male, although I am not positive.

Often the female will decide she doesn’t like either the male, the
fish, or both. The male will simply eat it himself and then go back to
fishing in hope he will find a less fussy female. 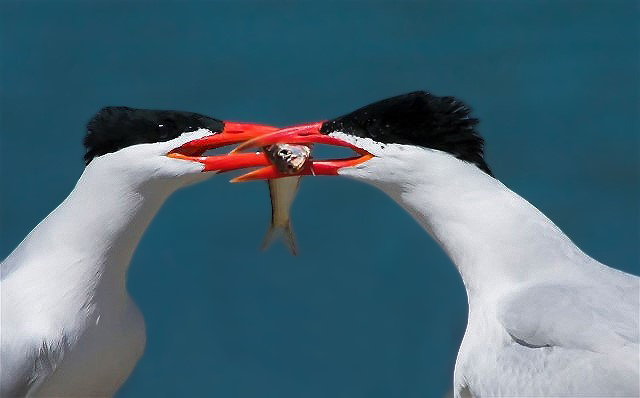 In my part of the world, there is no more common water bird than
gulls, especially Ring-billed Gulls and Herring Gulls. Most
photographers ignore them due to that commonality and the fact that
most people do not like them.  I admit that I love them. They are
great practice birds for action, and the fact that you can very close
to them can make for some great shots.

That close proximity also means that tight, “into their world” sorts
of images are pretty easy.

Gulls can be introspective too! 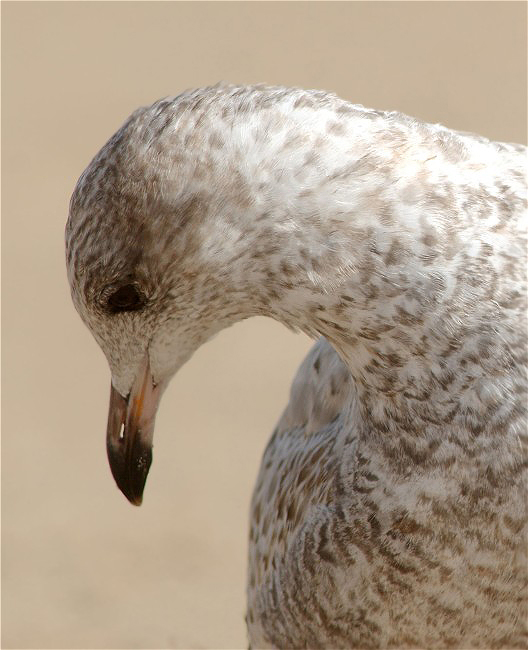 Pelicans like this young American White, can often be approached fairly close. 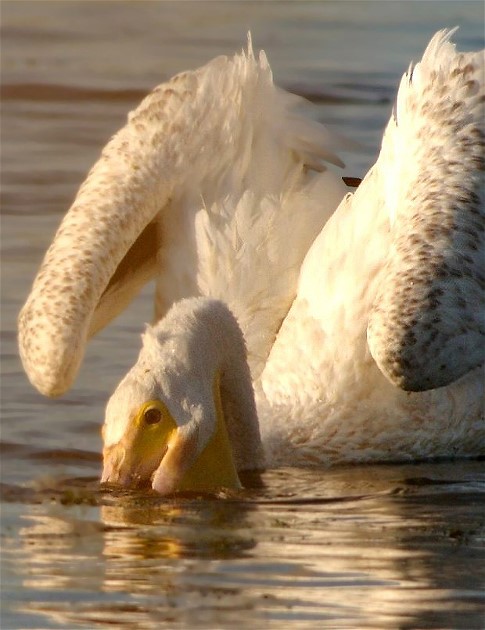 Wading birds, sort of the big cousins of shorebirds, are usually big
enough to keep some distance from when photographing.

This Great Egret is a large bird. We once again have a bird preening.
Preening is good for bird photographers.  It makes for naturally
artful poses. Add a mirrored reflection and you have an interesting
picture. 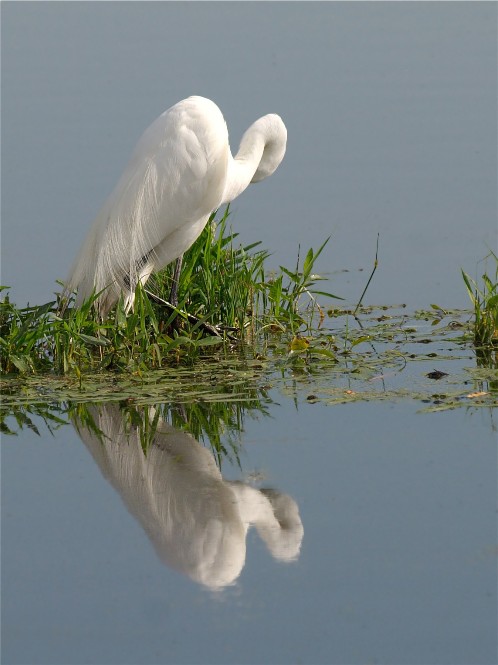 Behavioral activity such as feeding can be easier to capture with a
big bird then a small bird. Great-blue Herons like Great Egrets are
big birds. A large target can be a benefit.

Two herons sitting in a tree.   Green and Great-blue. 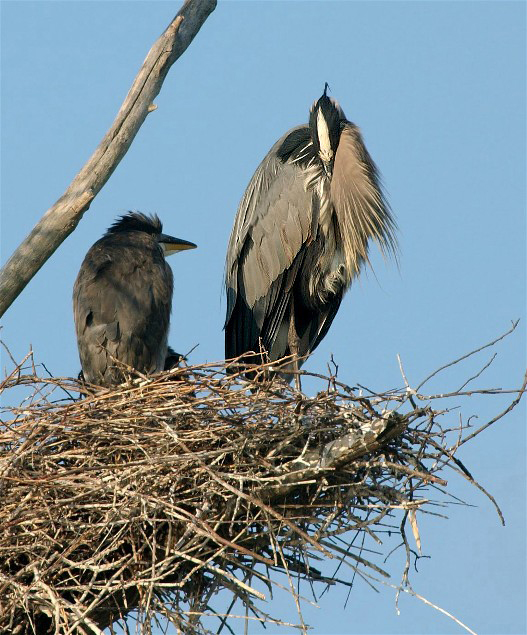 I was making (hopefully) artistic images of the grass and grain fields
you see below, when three Sandhills broke into a session of ring
around the rosie.  They eventually stopped, so I thanked them and
moved on.

Water birds are of course, just one small section of the world of birds.

Nothing like a good fight to make good use of your camera. Male
Ring-necked Pheasants,

Birds of prey are usually the favorite birds for the majority of male
bird photographers. Maybe they think that hawks/eagles/owls etc., are
just tougher than others. More macho! I must admit, that for whatever
reason, I like them too.

The Red-tail Hawk, is the most available bird of prey in the area
where I live. I could not count the number of images I have created of
this species.

Hawks make great subjects for action. This is indeed a Red-tail.

A fairly large sized and plentiful species like the Red-tail, is sure
to provide photographers with lots of opportunities for portraits.
There will hopefully forever be a want for bird portraits. 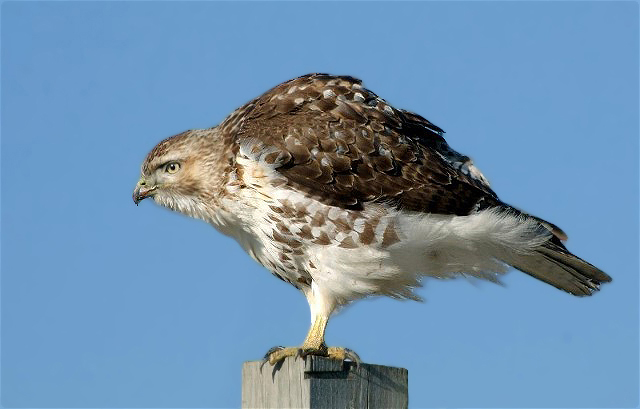 The more you photograph them, the more chances you have to get closer
and closer.  These two Red-tails are not the same bird or location. 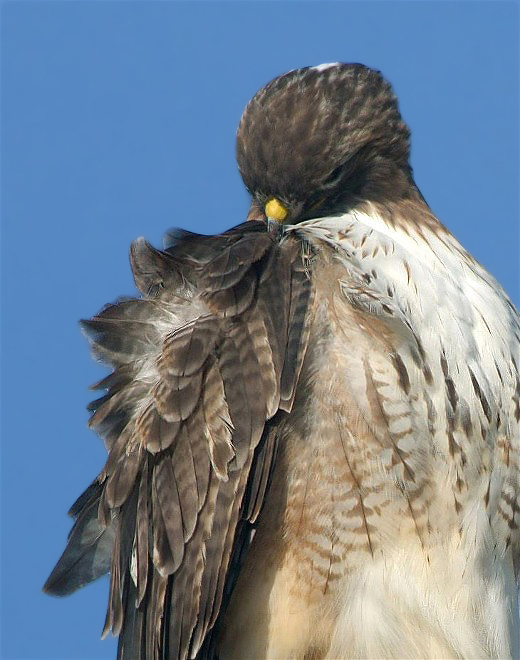 The American symbol (unless it has been changed do to political
correctness), in all its glory. The Bald Eagle.

The Crested Caracara is a bird of prey/scavenger which can only be
found in a very limited area of the U.S. I had approximately 5 minutes
with one in the Gulf of Mexico years ago. I failed to get much more
than this, which is a barely tolerable picture. Would not this be a
great species to spend a lot of time with?

Bless those little birds and the joy they bring to us, via our cameras
and any other way we can spend time with them.

The male Yellow-headed Blackbird. I was in my car with my 500mm lens,
and created this picture across a two lane state highway. The picture
is a substantial crop. The longer the lens, and the further away you
can make the picture, the more your subject will “even out” to eye
level.

There’s nothing like an “upside down” bird. The Cedar Waxing is one
bird that is often upside down.

“Bird Knowledge” be it from reading or actual experience, is an
incredible asset to the photographer.

A Brown Thrasher in all its glory. Color shouldn’t matter and this
Thrasher, despite having no spectacular colors, is special in and of
itself.

Every bird photographer who has a yard, and can afford some feeders
and some feed, has a great opportunity for some nice images.

The dreaded (not by me) Common Grackle. A very wet one at that.

A mouth too full to talk. The Baird’s Sparrow

The always superb, male Baltimore Oriole, once called the Northern
Oriole. Don’t worry, they can fly so they don’t have to live in
Baltimore.

I know that the sort of article I wrote today, is not filled with an
abundance of useful technical info for you bird photographers. If it
only serves to inspire you to get out and create imagery of our avian
friends, it will have been successful.

Remember, in species, and it types of images you create, the old adage
“variety is the spice of life” applies to bird photography.

I have been biting my tongue or maybe better said in the case of
someone who writes a blog, sitting on my typing hands, in an attempt
to not comment on the current political status in America  as well as
the mass murders, the press coverage after the fact, and on and on and
on.

I haven’t changed and neither has my propensity to share with you what
I think about such items. It is just that sometimes my frustration not
only with crime, not only with politics, but especially with what
passes as a news media, reaches the point where I cannot conjure up
words that might even so much as suggest a remedy. In other words,
whatever I might write would be so negative that even I would become
depressed by my thoughts.

Maybe tomorrow, maybe the next day, we will see.

I did, make two small sarcastic comments in the “bird section” of
today’s post. If I am anything I am not perfect.

In the meantime, photography, especially nature photography, has
always been and remains a viable escape for me, and hopefully for you.