A Matter of Conscience

I do not now nor have I ever belonged to any political parties. I admit that I am not a joiner to begin with, but I wouldn’t have done that anyway. I am a former (detoxed) liberal who grew tired of worn out old ideas that were meant mostly to entrap people into a voting pattern, and am a current (since the early to mid 1990s) political/social conservative. I have no intention of joining any party but it is hard to deny, that what your belief system is dictates which candidate you will vote for, and they will undoubtedly be connected to one party or another. I remain independent enough, to not vote for either candidate when I find it necessary. Under those conditions, I would of course still cast my ballot for offices other than the presidency.

The beat of dishonesty (outright corruption) continues to rumble in the world of Hillary Clinton, and much of the Democrat Party. It is amazing how most of the press has pounded the Republicans for their primaries and convention, while barely sounding a whimper about the other side.

The Republican primary election was honest and open to whomever could win the vote. Yes they (and me) as a group wanted anybody but Donald Trump to win and take their party into the general election. They looked at a 1,000 different ways to do it, but in the end, Trump won the election honestly and will be the party’s candidate in November.

I’m not known to feel sorry for socialists, but Bernie Sanders competed (he thought) in a totally rigged election. Five years ago when Hillary was covering up Benghazi, in an effort to save our current President’s re-election, she was also saving her own election for 2016. The deal was on and this criminal sociopath, knew all she ever had to do was appear on the trail in 2016 to become the Democrat nomination for the presidency. Not only do the (most already decided for Hillary) so-called super delegates decide the entire primary season for Democrats, but the hierarchy of the Democrat National Committee, was making fun of Sanders (and blacks and gays) the whole time and working hard to make sure he would not……and could not win. Democrats and Hillary, need to stop emailing.

I was ecstatic to learn that Virginia’s State Supreme Court rejected a bid by that state’s Governor, to allow convicted felons, those that were still under a no-vote commandment due to the seriousness of their sentence and the short time that had passed since that sentence, to allow them to vote in November. He was of course a Democrat. I don’t think anyone would deny which party gets the criminal vote.

Those of you who have read this blog before, including my political/social posts, know that I have said many times that Lyndon Johnson’s (and the Democrat party) so-called “Great Society”, and the type of welfare system that it produced, was nothing more than a racist attempt to re-enslave black Americans after the end of the south’s Jim Crow Laws and the new-found freedom in the south of blacks to vote without intimidation and other obstacles. It produced several generations of black American children with no father. Having an “at home” father (and minimal children), was punished under that system. Financial rewards were given for every child a woman produced, as long as there was no father in the picture. They became dependant on Democrats for money, and therefore became supporters of that party. Below are two quotes from Lyndon Johnson.

The language above is disgusting and the intent is vulgar. I have blocked out a single word in his quote. That hateful word will not appear on this blog even if it was said by a kind and compassionate (sarcasm) Democrat like Mr. Johnson.

This is a quote from the great abolitionist and profound thinker, Frederick Douglas. He was a national leader before that was allowed, and was the first black invitee (many had been there before to serve food etc.) to the White House. It was Abraham Lincoln himself who invited him to a get together of white social and political elitists. 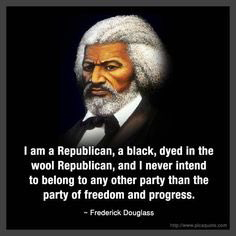 No matter your party preferences and affiliations, don’t be tricked into making what could be the biggest mistake in American history. Remember this, Hillary Clinton is the poster child for big business. Don’t let her fool you. Yes she is bent on producing her own form of socialism. One where the masses follow restrictive government mandates, and only the richest of the rich retain what they’ve got as long as they “share” that money with the causes (herself) that she believes in. She is currently breaking what was the record for taking money from Wall Street and other big business set by President Obama. They are not giving her those billions of dollars because they think she will hurt them. Remember, only the biggest and richest will retain their wealth if Hillary gets her way.

She virtually prostituted herself when she was Secretary of State. She sold herself (and Bill) through favorable policy decisions to countries like Iran and Syria. She’s counting the money she garnered from that while I write this….I am sure.

There is no law that says we cannot vote during elections, but ignore the particular political races that we find our conscience will simply not allow us to cast a ballot in. You can fulfill your duty and still remain free of being a part of the horrors of helping to create a president we will forever regret.

This post will be moved to August 16, 2015 shortly after publication. Most non-photography posts, regardless of when they were published, live there.