“This practice of constitutional revision by an un-elected committee of nine, always accompanied (as it is today)  by an extravagant praise of liberty, robs the People of the most important liberty they asserted in the signing of the Declaration of Independence and won in the Revolution of 1776: the freedom to govern themselves.” Antonin Scalia

Everything you see on the poster below is correct. I am the first to admit that there are conspiracy theorists today that will find foul play in everything that happens. Just the same, wouldn’t you think the “mainstream media” would want to pursue this?  Imagine if this happened to Republicans and or enemies of prominent Republicans’?  As an aside I believe Victor Thorn’s death was ruled a suicide.

It’s too bad black lives really don’t matter to those who claim they do. 9 shot…..nobody cares…..one shot…..riots.  The suspect had a 16 shot semi auto gun to the officer’s 10 shot. He was running from the police and turned and faced the officer with gun in hand. Oh yah, the officer was black. Racism?? Wayne Nelson

Liberalism has been just as destructive to Black American society as were the Jim Crow Laws of the (then) racist south.

Lyndon Johnson’s so-called Great Society has produced devastating results. I am ashamed to say I was a proponent of that system many years ago. We should live to learn. 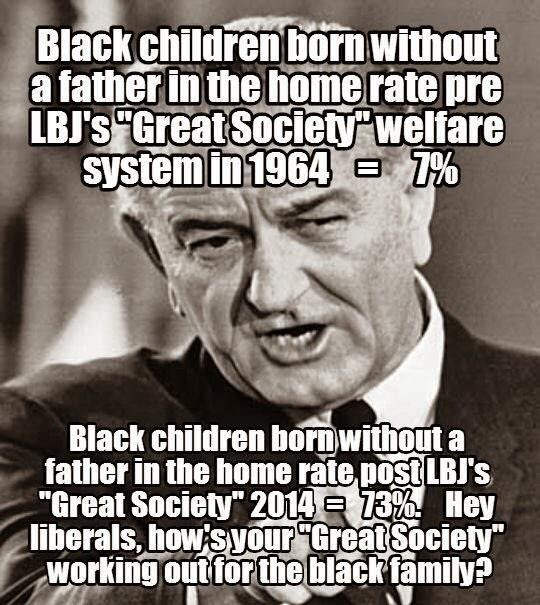 There is always hope living somewhere in the gloom. There is a new growth of minorities, blacks, Latinos, Asians and certainly women (actually the majority), who are rejecting liberal social and political oppression.  They are beginning to see it for what it is….an attempt to play on people’s desire to help and do good works, in an effort to gain power (and wealth) over those very same people. Much like Stalin, Mao, Hitler and others who have come before them, they will do anything and do it to anybody, in order to reach their personal and social goals.

Do what many are doing today and reject their phony offers of Utopia (really hell). Let freedom ring.