In The Beginning…..There was Celluloid

Posted on December 5, 2019 by nelsonearthimages

Actually in the beginning, there were metal plates, but that’s for another day.

All of today’s images have two things in common. One, they were made a
long time ago, and two, they began their life on small pieces of
celluloid. Also known as transparencies, positives or slides.  Some
were 35mm slides and others were 4.5×6 (known as 645) and 6×7
centimeter sizes and formats.

Regardless whether they were tiny (35mm) or large, they had the same
liabilities. High contrast (sometimes good, sometimes bad), slow ISO
speeds, and there was little the photographer could do to edit them
after creation.

I often love contrasty images. Especially, contrasting colors and
textures. I frequently searched for color and texture contrasts when making photos.
Contrasting light, as in bright against dark, can be beautiful as
well, but it can also make it impossible to allow our eyes and brain
to settle comfortably on an image. In these sorts of shots, very often
gentle beauty becomes “harsh reality”.

The first three images below were created on Velvia transparency film
in the Guadalupe Mts. Of west Texas, al long time ago.

I love the eye popping contrasts of this first scene. That light
contrast helps to promote texture.  The shadows in the small gully and
to the right of the El Capitan peak, are just enough (to me) to create
some pizzazz in the over all picture.  For that reason and for the
saturated colors of Velvia, I loved that film.

With this next image I was at a different angle, and the contrast
became more extreme. I still enjoy the artfulness of the
light….but….the empty shadow in the left hand corner of the image, is
bothersome to me. What to do.

The magic of digital imagery takes over as I solved the problem many
years later after making a digital copy of the transparency.

Current software which I do not own, can allow for the natural
appearing blending of the dark shadow and light areas. In other words,
add light to the shadow, and then blend the edges of the
transformation gently. My software is a bit backwards on such issues
so I simply cloned some of the rock and gravel that is in the scene,
over the darkness. Possibly not “kosher” in its application of
honesty, but a simple, quick fix for those who desire a change.

This next New Mexico image made at the Quari Ruins, is another Velvia
photo, and I love the way it handles the color, tone and texture of
the subject. Yes, I also love the dark shadowy area made from the
shadow of a part of the ruin. That splash of snow on the edge does
give that area some life.

Take note, the sun is coming from our left. That angle made this an
opportunity to seek polarization, via the use of a polarizing filter.
That arranges those scattered blue rays of light. With that said, the
polarization is just a bit uneven. My bad! You can see the evenness of
polarization through your camera when you are doing it.  So if I was
paying attention, I must have decided to accept that fate.

I have always been a flower photographer. Even when shooting black and
white, Velvia, Kodachrome and other such films, I created a lot of
florals long before I had the versatility of digital imaging.

Those of you who have viewed much of my work, will notice that my more
recent digital style of one sharp blossom with out of focus splashes
of color in the background, actually was employed back when digital imaging was still an
imaginary fantasy. 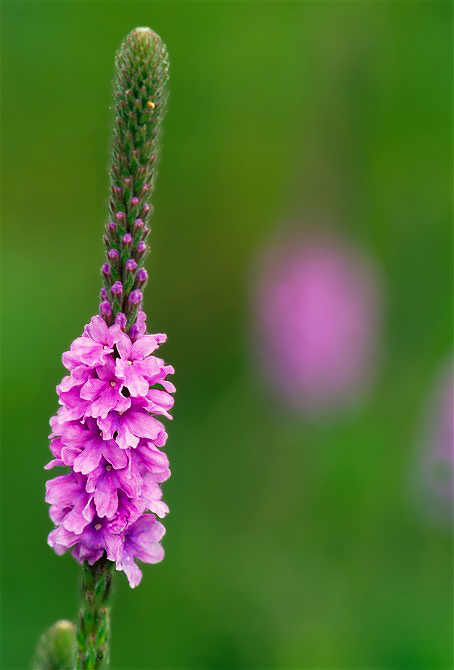 Color contrasts, are beautiful regardless of the media.

Monochromatic (one color) super close-ups, are not new. A macro or
close focus lens and a close approach has made flower photography a long held
(beginning in the mid 1800s) artistic discipline.

My favorite part of Velvia film, was how it handled low light images.
Especially sunrise/sunset pictures when the sun was behind the
curvature of the earth, or just blessing us with “fresh eyes” for a
new day.

This sunrise was created years ago here in Wisconsin in a meadow just
in front the the northern portion of the Kettle Moraine State Forest.
The rest of the day was spent with insects, flowers, birds, frogs and
finally late day landscapes.

So many incredible days. 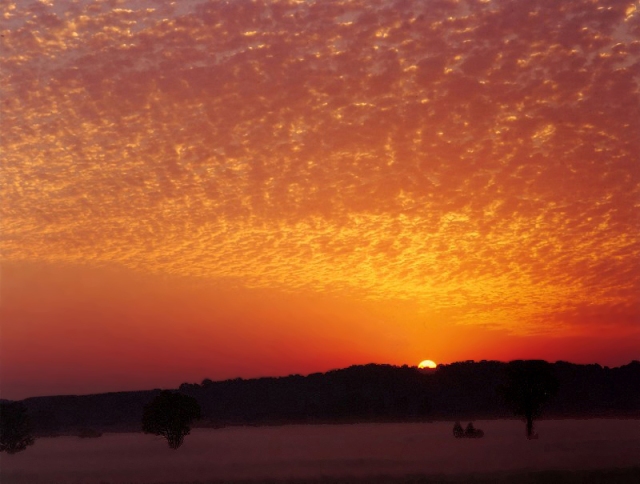 Film, digital, and whatever comes next (and there will be a change),
photographers will forever be challenged to look at reality, and then
share it with the world the way “you see it“. It will always be about
your personal interpretation.