Posted on January 10, 2016 by nelsonearthimages

The original title for today’s post was 1 Day. The point was to show a variety of images that were all made during one day, while I was around my home turf. Those images would show everything from sunrise to sunset, as well as macros, birds, mammals etc. Days like that were my favorites, but it is harder than I thought to find eight or so distinctly different types of images in one single day, all around home, all in one image folder. The seasons dictate some of that as indicated by no insects, or flowers in the winter and so on. I will however complete a search for those “all in one day” images in the future. If you want to learn something about yourself as a photographer, and how you relate to your subjects, and how much you really “see” in a day in the field, go back through your files and make such a search.

Instead, I randomly chose a mixture of old pictures from several different days, months and years. My brief search brought me mostly wildlife images, and I’m okay with that. The images are below and I simply added whatever thoughts or memories came to my mind when I viewed them.

One logical effort that most wildlife photographers share in common is to attempt to create pictures that are free of obstructions. We want as clear an image as possible. I was usually on the look out for clean and simply pictures but sometimes, a bit of foliage or a rock gives your subject a sense of place. They will be firmly rooted in their environment and there might even be a touch of art added to some of those pictures.

The Javelina lives in several different western habitats but it is probably best known for the scrub and cactus deserts of the southwest. In this case, western Texas is the background. Does it bother you that its nose and body are partly obscured by plant life?

Around my home, much of the wildlife I have found has been near or in Lake Michigan. This Red Fox kit was watching me secretly from the top of a rock and foliage covered lake bank. Both the habitat of my subject and its cautious approach to me, are evident here. I think it matters little that the left side of its face, and a portion of its eye are covered. If anything it adds to the foxes attempt at secrecy.

This Rough-legged hawk had a Pheasant trapped beneath the snow when I made this picture. I think not only the snow, but the winter grasses and the pose help make this an acceptable or interesting photo.

Let’s move away from birds and mammals for a minute

If you know me, then you know I love photographing flowers. The variety of images you can achieve from just one flower is amazing but there is nothing like immersing yourself in fields or woodlands that have dozens of species growing there. I find as I move from flower to flower, and change my style of shooting, that my actual mood changes as well. 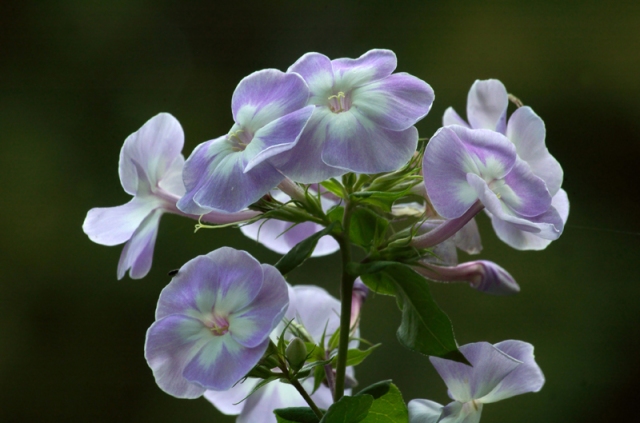 This dragonfly flew round and round (2007) and kept landing on different perches. In my experience that is unusual, as they usually find a spot they like, and keep returning over and over again. I was getting tired of making busy pictures with confusing backgrounds. Finally it landed on a perch where the background was fairly distance. I opened my lens up to f 13 as to keep that background out of focus, moved up my shutter speed to 1/125th of a second, and tried to pinpoint my focus to get the dragon sharp. There’s nothing like a morning of hunting dragons…..with a camera. To me, that is the definition of a dragon slayer.

This dewy butterfly image is of the sort of picture that people either  love or hate. It was made on film many years ago and either electronic flash or a silver reflector was employed. This picture is not suitable for the natural history sort of usage that most of my customers were seeking at the time. However, it has been published multiple times by those who were seeking more artistic (in their opinions) renditions of nature’s little jewels.

I have hundreds if straight on views of frogs. When I saw this Bull Frog on a pier, I was not saddened by the fact that my picture would be a profile. Variety not only keeps photographers fresh and interested in their work, but it also makes for a more profitable set of stock files.

Seeking out songbirds as photographic subjects is fun and sometimes challenging.

It took me a long time to get my first male Eastern Meadowlark perched nicely, in a profile pose, and in full song. Once I did, hundreds more were to come. The first one is usually the most difficult.

Getting a male Rose-breasted Grosbeak in a nice natural habitat was also not an easy chore. Of course in this case there is a set of bird feeders to our right. This spot was being used as a scouting location for a variety of birds including Indigo Buntings and Northern Cardinals. 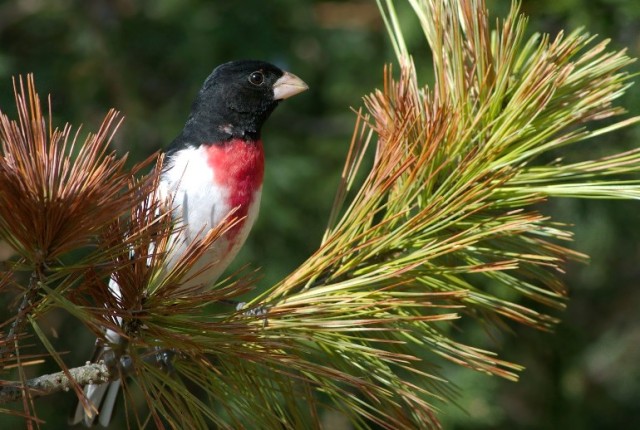 When I made pictures at bird feeders I always made sure to capture some images on the actual feeders (or food). They are interesting pictures that have commercial uses and occasionally artistic ones as well. This is a male Baltimore Oriole.

All birds of prey can be difficult subjects. They will often fly if you slow down your car or stop your walk. That being said, patience is a blessing with all of them. Once they accept you, if you keep your movements slow and quiet, they at times will sit in front of you for an hour. Of course, they also fly and often do so just slow enough to make good pictures.

The top shot is another Rough-legged Hawk, the middle a descending Osprey, and finally a beautiful American Kestrel on one of their favorite perches, a beautiful (sarcasm) power line. 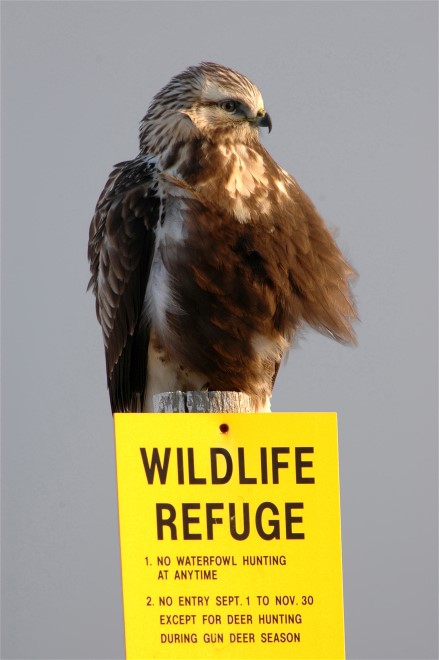 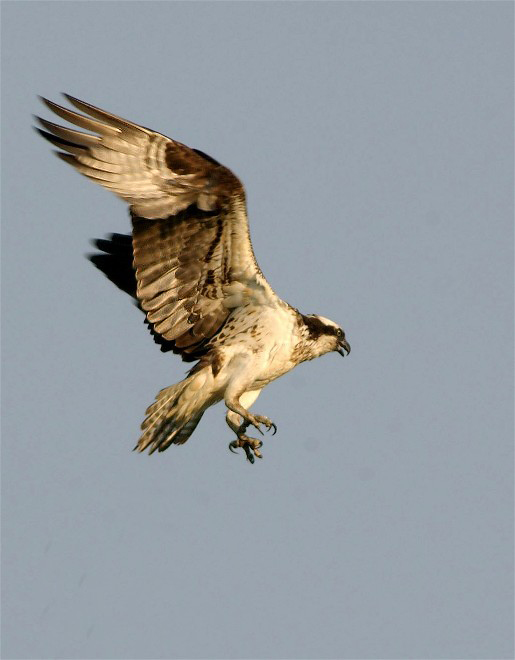 I have often been asked if I digitally alter my wildlife pictures. Other than a crop or maybe some sharpening, I rarely change anything. I mention this now because I did alter the Wildlife refuge sign beneath the talons of that hawk. I separated the yellow of the dingy sign from the rest of picture, and then added more bright yellow to make it pop.

My favorite type of bird photography is not songbirds or birds of prey, but waterfowl of all kinds. This is a winter plumaged Horned Grebe. The compositional choices, the different qualities and colors of the water, the potential action and the wonderful contemplative poses that you are presented with, combine to make waterfowl a favorite subject.

Eye to eye close-ups of wild Bighorn Rams are not only possible but easy with a 500mm lens in a national park. They are especially easy in non-mountain parks like Wind Cave N. P. in South Dakota. I have followed Mountain Goats while on foot at well over 14,000 feet in Colorado at the top of a mountain, and I appreciate South Dakota when photographing mountain climbing animals. 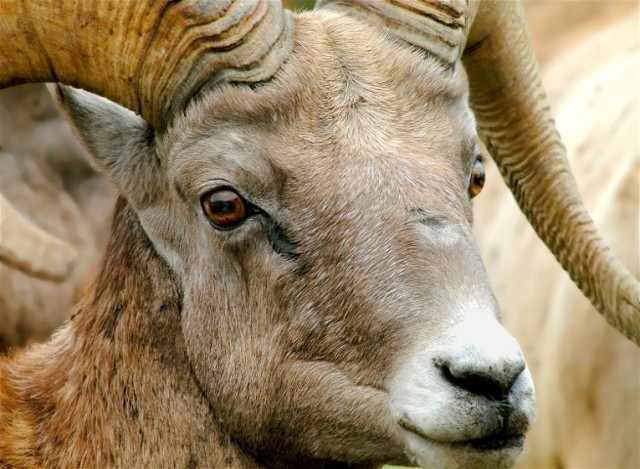 Red Foxes are beautiful animals and they present you with many equally beautiful poses. Sometimes however, especially with adult males in the middle of summer, they can be very scraggly. They are also usually pestered with insects and other things, making their most common pose, that of them scratching. None the less, I always took those pictures when I found them.  If just by chance, I could make the shot right after sunrise, well, I was happy. The quality of the light attracted me to this picture as much as the subject. Light after all, is photography. 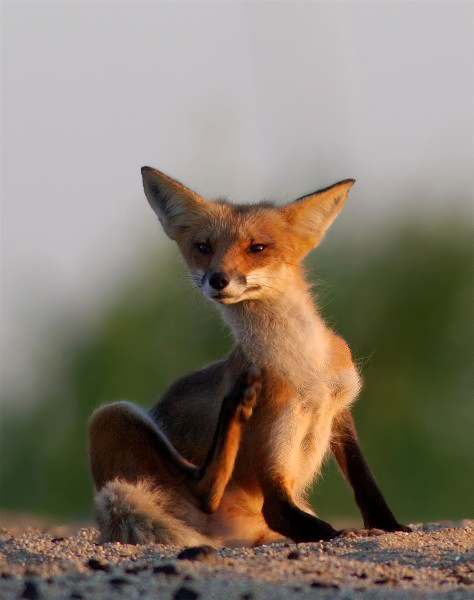 A year or two ago I became addicted to a television show called The Pinkertons. It was a show that was clearly made in the 2,000s, but it was a western. I thought the last of the TV westerns were finished in the 1970s, and with my love of the genre, I was happy to find a newer one. I am guessing that it was originally produced by one of the more obscure cable networks. If you’ve read my blog for a long time you know that I love westerns and have watched them since I was a toddler. That love among other things, drove me to own and enjoy horses for over 20 years.

The Pinkertons were a real life detective agency of the 19th Century. They began in Boston I believe, but after the Civil War they moved west. The Pinkertons TV show takes place at around 1870 in what was then very rustic Kansas City. The show is essentially a fairly well-done murder mystery, with a new crime to solve every week. One of the things I loved about the show was that it was visually believable. The clothes they wore truly looked like they were from that era. In other words, they were neither an assemblage modern clothing made to look old, or a rehash of the clothes they wore in 1950s westerns. The clothes they wore and the guns they carried were right out all of the actual photos and paintings I have seen from the real west. Also, the interior of buildings were furnished in a way that made me feel that I was there in 1870. In most westerns, the interior of buildings are either way too modern and fancy, or they are way too creepy and decrepit. With all that said it wasn’t the stories, or the clothing, or the buildings that fascinated me. It was the light.

The interior scenes in almost all TV or movie westerns are lit by modern, bright, studio lights.  Very unrealistic and mood killing. Those directors that would attempt to counteract that unrealistic light usually filmed those interiors in almost darkness. The interior lighting during that time period was not bright and vibrant, nor was it near total darkness. The true lighting of the day was that of the coal oil lamp. Maybe in somewhere like New York they already had gas lighting, but even that produced a yellowish cast. Coal oil was even more so. The lighting in the Pinkertons had a semi-smoky yellowish look. The light coming in from any windows would produce a slight smoky film in those poorly ventilated, coal oil lit rooms. I could watch the actors doing scenes inside of buildings with that dim, yellowish light all day. I would have watched this show even if it was terrible, which it wasn’t, just to “feel the light”.

Whether I became a photographer, which is a purveyor of light, because of my life long love for the light around me, or I began to appreciate that light because I was a photographer, is not known to anyone including me. I’m just glad that I put the two together. I can’t imagine life without “seeing the light“.