I have been having the time if my life the past day and a half watching American liberals deal with the thoughts of a Donald Trump Presidency. Liberals are the most entertaining group in our culture.

Watching discussion groups on any of our many thousands of liberal TV news shows is amazing. How do these people manage to survive on a daily basis? Then on one newscast here in Wisconsin a report came on telling that in our state public university system, they are offering grief counseling in the aftermath of the election. It is offered to help deal with the shock, dismay and fear of a Trump Presidency. I was sitting on the edge of a chair putting on my shoes when I heard this and literally, fell on the floor laughing. They were serious. We are raising a generation of young people, “the millennials” who (many not all) are not able to deal with anything unusual that comes up in life. I say unusual, as it is defined by modern American liberals. Like having a different president than you wanted elected. We are creating a nation of self-indulgent weaklings. Thankfully, there are still some great parents who manage to raise normal human beings despite what is happening around us.

I guess it is to be expected in a liberal society that puts more emphasis on verbal political correctness than on what you actually do. The political race that just ended, personified that. I mean, how are our kids going to deal with the terrible things Donald Trump said? No thought to how we would have dealt with a president who “DID” terrible things. A felon, who sold our nation out. A criminal, who enriched herself through several of our enemies, and has lied (badly) for her entire public life. The important part is, that she said the right things while pretending to be a caring American. Of course, as I have shown you previously on these pages, she actually said disgusting, hateful and hurtful things in private (well, the Secret Service or State Police were there), but that doesn’t count. Oh wait, those equally disgusting things that Trump said were also meant to be private. Well it doesn’t matter if what you say is politically incorrect. Clinton was merely swearing at, threatening and demeaning police officers.

Liberalism promotes weakness, selfishness, and making the superficial more important than the substantial. It makes someone who says terrible things more dangerous, than somebody who does terrible things.

Comedy and tragedy are never far apart and that is true with this liberal driven, politically correct society that has been created. A world where we have to parse every word we say, but accept the worst in criminal behavior, is a dangerous one. American liberals perpetually want to see our worst criminals released back into society, and we have a current president who has done so by the thousands, while treating as criminals those who have  said what they decide is the wrong thing. Priorities from liberals are always askew.

I have never before and never will defend the disgusting things that Donald Trump said. I only accepted him as my candidate for President of The United States, when all others failed. I found it more important to reject someone who has DONE disgusting things. Things that could bring down my nation.

For the time being, I will continue to be entertained by the liberal left. I will chuckle over the hand wringing, and laugh sadly over the coddling of our latest generation of young adults.

The reason why Donald Trump did so well, is multi layered but all connected.

Firstly, the (truly) scary candidate he faced, was rejected by thinking, caring Americans. It was what she’s done, not so much what she’s said.

Donald trump was elected by blue-collar Democrats who are tired of being used by their party. They are tired of watching their party stand for increasingly shameful things while they are expected to keep them in office by voting for them.  Their party represents anything and everything but them.

Blue collar Republicans over voted the Republican elite snobs. They turned out in force.  The rank and file, had a candidate who appears to stand for much of what they believe in.

Then we have disenfranchised independents who could never support the socialist agenda of Democrats, but were struggling with supporting the upper crust of the Republican Party. Many haven’t voted in years. They are good, normal people who have grown sick and tired of being told they are sexist for this, racist for that, and homophobic for the other. Everything they do and they say seems to be wrong. They are productive, they are honest, and they made a statement on Tuesday.

Wall Street, with the billionaire Marxists  such as Soros and Buffet, is the modern Democrat Party. Red China, has shown us a new example of Communism, where government controlled “free” enterprise, allows for the filthy rich, as long as they share their wealth with the political left. That is the new Democrat Party. They continue to use the poorest among us, to cast fear into the fading middle class, via violence. The modern Democrat Party absolutely requires not only leftist billionaires, but poor sub-classes including racial, ethnic and religious minorities kept in need, with promises of more giveaways. Violence out of those groups as we lead up to elections, is essential. They will promise, as Obama did, that they (Democrats) are the only party who can stop that violence.

Tuesday was a major indication that our liberal, socialist news media, can and will be ignored by tens of millions of Americans. At this moment, that media has never felt more impotent. The internet does serve a purpose and we need to continue to by-pass the conventional media.

As I write this I am seeing reports of yesterday’s violence in America. Once again the left’s love (sarcasm) for democracy is astounding. They are only in favor of it when it goes their way. Well, Mr. Obama, Ms. Clinton and others……they are doing this on your behalf. What yah gonna do? You love democracy…………right?

There are plans for this in Milwaukee soon. Oh by the way, it’s supported by the University of Wisconsin/Milwaukee. You know, that public university that’s financed by everyone.

Of course, when Obama was elected for the first and second time, all of the conservatives were out protesting. Wrecking, burning!! Oh wait a minute, we didn’t do that. It’s called believing in democracy. 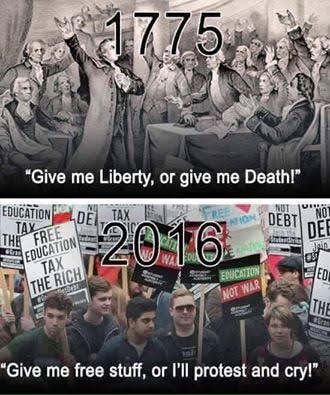 You will be happy to know that I am just about played out when it comes to politics and I am looking right now at some beautiful nature photos (from others) that will be placed into my next post.