This once great country, is becoming a Banana Republican. The corruption of this election, and what has taken place in our State Department and FBI over the past several years, is reminiscent of a third world nation. The Clinton Foundation is a criminal enterprise pretending to do good works. Our news media leads in the election of one candidate over another. Even they don’t argue that fact anymore. I would say this is a turning point in our nation, except, it seems we have already turned.
Watching this election, and learning the facts of eight years of corruption and selfishness, is much like watching the goings on of a small country in South America or Africa. What’s next? Will they round those of us up who speak against it. Maybe they will watch us fill out our ballots on election day. Maybe a test that only left-wing extremists could pass?
—————————————————————————————————-
Milwaukee County Sheriff David Clarke caused an uproar this past Saturday, when he suggested in a tweet, that for Americans, it is “pitchforks and torches time” and we need to take back our country. I will admit, that when I first read those words, and saw the picture (below) that accompanied them, I thought “oh my, what have you done?”. As is us usually the case, Sheriff Clarke knew exactly what he was doing. 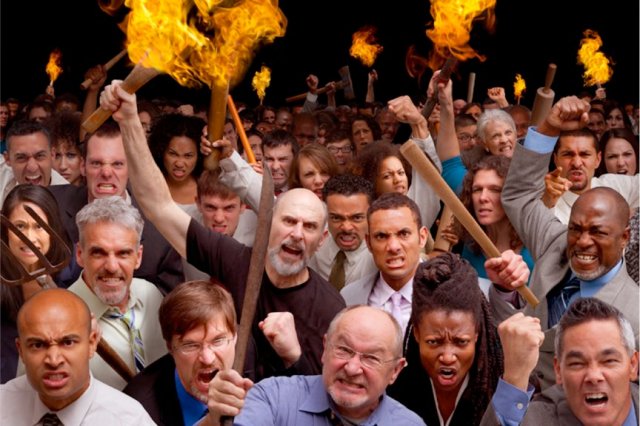 Clarke meant what he said in that quote, although he isn’t suggesting we use actual violence when we do it. Most liberals, including the media, that read his words took it “completely” literal. Maybe they just read what they want to read.  He also knew, that the phony, hypocritical news media (Democrat media), would be in shock mode because of it. The word metaphor seems to be missing from their dictionary. ABC, CBS, CNN and others came a calling. Normally they will attempt to ignore what Clarke says, unless they think they have something negative to report. As is always the case, he is smarter than they are and they fell lustfully into his trap.
The link at the bottom, contains a brilliantly written article by Sheriff Clarke. It is about today’s government, and today’s media. As is often the case, “The People’s Sheriff” is way ahead of them

.
I would love for you to read it. Often I copy and paste entire articles like this into the body of my post. I do that because I know that most of you do not follow links when I put them up, but you do read my entire post. It is much neater and more fair to each of you if I give you a link for articles that reach more than three paragraphs.