Posted on October 31, 2013 by nelsonearthimages

With all of the compositional concepts that I have talked about on the pages of Earth Images, I seem to have forgotten vanishing point.

The simple way to explain a vanishing point is to say it is where one, two or more lines in a photo or a painting, converge, and then disappear. You could draw a straight horizontal line through the point where multiple lines reach that vanishing point. I have written much about leading lines and the rule of thirds.  Those lines that disappear can be leading lines.  The point of convergence is often at the 2/3rds (rule of thirds) point of an image.

If you look through your camera at a set of railroad tracks, they will converge at a vanishing point. There can be several lines from different parts of your composition  that converge at different points from left to right, but they will vanish at the same location (south to north) in the picture.  Vanishing points exist with macros as well.  The same principles apply but your depth of field will not stretch the entire distance on a long vertical line when you are up close.  Make sure your focus is near to you (and the viewer). Let the focus run soft near the vanishing point.

Vanishing point does not truly exist but is more of a visual illusion that can be incorporated into your photography.  Using objects like textured trees or colorful blocks will enhance the illusion as our eyes are drawn to those patterns.  The distances will appear to increase. Illusion is a part of photography, even when you are making a straight forward image.

Look at the landscape work of Joseph Rossbach or Ian Plant.  They often “intentionally” use vanishing point in their pictures.  How many times have I said that the real magic to Rossbach’s imagery is his use of perspective?  Quite often the vanishing point adds to how our eyes travel through his imagery.

The roads and the trees in the images below show a vanishing point. It is even more powerful in the autumn picture as the “point” is just where the road turns left.  I think it is more powerful than the straight disappearance of the snow-covered road.  You really do wonder where that road takes you.

Vanishing point is something that many photographers make good use of, without fully understanding, or maybe even knowing of its existence.  That’s because you can see it through the lens. You don’t need to know the specifics of how vanishing point works to use it. The benefit of understanding it is that on occasion, when the circumstances permit, you can employ this phenomenon purposefully to create a more interesting image.

Size can matter.  Size can become difficult to determine in a photograph.  We often need visual clues from other objects.  Can you tell that the first image of a tern contains a bird that is much smaller than the bird in the second?  That blank blue sky doesn’t give perspective or any clues.

The first bird is a Forster’s Tern and the other is a Caspian.  The Caspian is about 1/3rd larger than the Forster’s.  If I were doing a photo story on terns I would want one or both of these birds pictured in the context of something in their environment to let the viewer know which is larger.  The same object in both images would be preferable.  The best and most obvious scenario would be to picture both birds side by side. I only wish I had such an image to illustrate these two  paragraphs.

Aerial perspective.  A photo that carries several layers of land, will suffer a loss of contrast as we move away from the camera.  Atmospheric haze is the culprit. Those layers of course darken as they get closer to the viewer.  The nearest piece of land will usually go black.  That is because the scene has so many layers of contrast that there is not an exposure that will render detail in both the farthest and the nearest part of the image. This phenomenon can be used by you, the photographer to create powerful images. 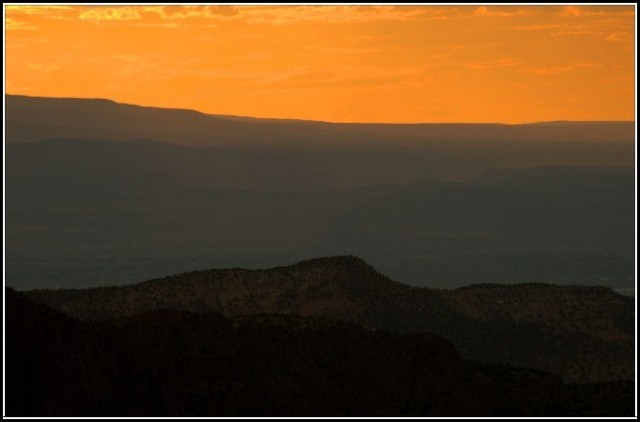 There are so many tools at a photographer’s disposal, that a good image maker should never, ever be bored, but they should always be challenged.  There is much to think about every time the shutter is clicked.  That is all good because it means you deserve the credit for every picture you make. There are happy accidents on occasions but the best photographers remain in control of their art.  They lead future viewers where they want them to go.

Visual rules, compositional or otherwise, and technical expertise, are a tremendous aid to the creation of art.  They can however, become a hindrance if you let them.  The rules are important and they work, but rules are indeed made to be broken.