Posted on September 26, 2013 by nelsonearthimages

Well we’ve turned the corner from summer to fall.  This is  a great season for nature photography.   I miss being a photographer more now than any other time.  Bird migration, the last insects, the last flowers, spiders (yes spiders) and finally autumn color.  This season stands alone.  There are a few small pockets of color already in southern Wisconsin, and heavy color in the far, far north and mountain states.  Keep your cameras handy.

I love going to great locations and shooting at the edge of light, but what should we do when we have to grab the shot whenever we can?  Every trip I have taken has presented me with this problem.  My short answer is simple…..take the picture. You might want to do a little creative regeneration to your image when you get home and are in front of your computer.  That’s really not my thing, so quite frankly, I do the best I can with a realization that those particular images won’t be my most powerful.

The three pictures below were made on the western descending slope of Rocky Mt. National Park in Colorado.   I did make pictures here way back in 1986, and while I knew this time I would have to shoot rather quickly and move on, I couldn’t resist this mountain valley.  They were made during the summer season.

This top image was meant to be an overview shot and while it is pleasingly composed, it was done so quickly and without an eye towards a masterpiece.   The dead light of high noon is apparent in this picture.  I know people who like this image a lot but they are in love with a wonderful place that they have visited before, not my image.

This next picture was made not far from the first.  I loved the crystal clear water and how well the foreground (forewater?) stones  showed up.  The problem is that the river becomes a barrier to the rest of the image. It keeps you from taking a comfortable trip into the valley.

I solved the barrier issue by getting my feet wet and shooting up river. My only disappointment with this photo is the fact that those stones don’t show as well, and the sky is a weaker blue. I used a polarizer for my first shot and removed it on the second photo as my change of angle would have rendered it useless.  Filters become meaningless pieces of glass, resin or plastic under many conditions.  Never put barriers between your camera and the subject when they serve no purpose. 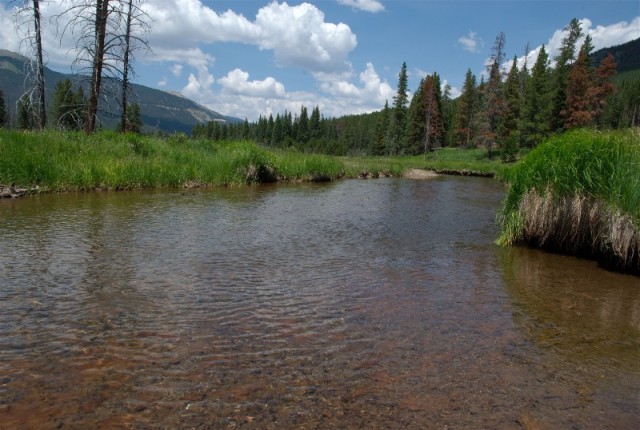 I already mentioned that there are a few small pockets of autumn showing themselves in this part of the world.  If you have been telling yourself “I really should get out and photograph the fall colors this year”, do it.  Don’t leave any “I wish I would haves” on the table.  Time has away of slipping away and nobody gets a forever.  If you live somewhere like I do that has the true beauty of autumn, be grateful and show the world how you see it.

For a change I decided to show you fall images that have been shown only once before or never at all.

I love creating “color contrasts” and autumn is the best time to do that. 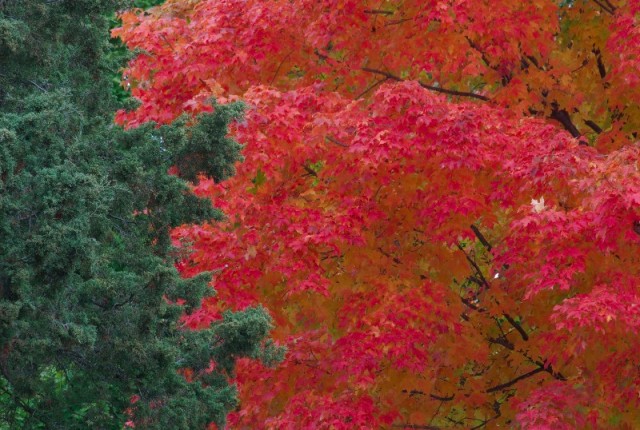 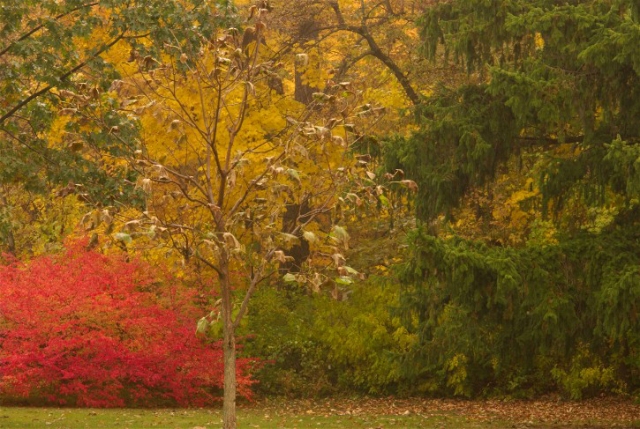 Shooting fall colors is not only about colorful leaves.  When you are photographing trees, be it 1 tree or 100, the trunks and limbs, as well as surrounding bushes etc., are just as important a part of your composition as those pretty autumn leaves.  Simplification is the key and as much “order out of chaos” as you can provide, is the goal.

Anywhere you find fall colors is a great place to make images.  Cemeteries often have very old maple and oak trees and that lends itself wonderful color. Occasionally I will also include some of the signs of man in my cemetery pictures.

When I look at which of my older blog posts receive the most visitation via Google/Yahoo searches, I am pleased.  The compositional articles on Composition 101 lead the way, and gaining every week is my Cloudy Day Landscapes post.  People want to make good thoughtful pictures and they don’t won’t to head home without making pictures because of the lack of the so-called necessity of sunlight.  When in doubt create the picture and make several comps if possible.  Every kind of light can be beautiful when you see it that way.

I am happy to say that my flickr group called Earth Images (of course) has hit 1,000 members.  Not a large number by flickr standards, but considering how little effort I have put into that increase, it is nice. There are those who read this blog who have helped increase the membership and I appreciate it.  This is my second group on flickr and after starting it I worked toward enlarging the membership until it reached about 350 members and slacked off.  I looked one day and there were about 990 members.  I began to put a little effort to reaching 1,000 but every time I got to 999 I would have to remove some non-nature photos and those photographers that belonged to the pictures would leave the group.  I guess the four places where I post the rules were just not enough.  Of course that continues so it is possible that my 1,000 members are now 999…or 998…or 997…and so on.

The quality of imagery on Earth Images on flickr varies but much of it is incredible.  I am frequently inspired that a group carrying the Earth Images name has so much world-class imagery on display.

I was pleased to see that the “new” Kodak Corp. will continue to manufacture film. Most of my final years of film photography were spent with the Fuji company but I have many fine memories of some great Kodak films as well. It looks like they are making medium format (120), 4×5 inch and 35mm films.  I am shocked that there is still a market for 35mm