Posted on September 11, 2013 by nelsonearthimages

I read a discussion on a blog the other day, debating what a photographer who lacks money, should buy in the form of equipment.  All I could add to that debate, was what I did through all of those years of photography.

I was never financially poor through any of those years of photography, but I was always just lean enough in the wallet, that I was forced make decisions. So my words are not for those who have enough money to do whatever they please, or those who really can’t afford to do it at all.

I made a decision many years ago to spend my equipment money on things that help me make better pictures. Camera bags and photographer’s clothing don’t equal better pictures.

I have made pictures with photographers who had cheap lenses, but only the best in camera bags. One day in 1998 (or so) I sat behind a car (using it as a blind) making pictures with a young lady who dreamed of wildlife photography. She had Lentar lenses.  I believe they do not exist any more.  Do not misunderstand me. Sigma, Tamron and few others do make fine lenses. She had all of $1,000 wrapped up in 8 prime lenses including a 400mm.  She had $1,500 worth of camera bags.  She should have spent her money on shoes and cool hats. Camera bags don’t make pictures even if they do make a fashion statement.  At the time I had one lens alone that was worth over $5,000, but all of my bags combined were worth about $80.

We do need to carry our equipment and I made one concession to the cost of  carrying equipment.  Carrying bags into the field is difficult anyway so I did splurge for a top end photographer’s vest.  Some of the pictures that I have shown on this blog were made 1, 5, and even 10 miles from my car.  Because this vest was going not only on long hikes with me, but was going to be worn in every kind of weather, I was going to crawl on my belly while wearing it, and on some days it might be on my body for 16 hours, I purchased a good one.  I did not care (too much) how it looked, or what name was on the vest.  I didn’t care if it made me look like a photographer, or a plumber. I did carefully examine the materials, stitching and craftsmanship.  That vest looks pretty bad today but it remains 100% functional.  My point is that good judgement and careful thought is the secret to knowing when it is time to break the rules and buy something expensive, even when it does not make for better images.

I did convert a camping backpack for photography.  I grew weary of pulling it off and digging out equipment and switched mainly to my hands and my vest.

In my film days I would absolutely never buy Canon or Nikon’s #1 top camera.  35mm film cameras are primarily a transport device for film.  I may not have looked rich, but I used the money saved on camera bodies to shoot more pictures.  The lenses I attached, and the type of film I allowed the camera to transport, along with who I allowed to develop and mount it, was where the technical quality of the finished slide came from.  That game has changed.  With sensors, mega pixel ratings, noise and more, that directly affect the quality of your image, camera bodies are significant in digital photography.  The point that I am attempting to make is, when it wasn’t important during those film days, I wasted not a penny just to have another photographer be impressed.  I was interested in impressing those who might buy my work, and none of them ever asked what kind of camera I used.

Several posts back I revealed what I carried in my camera bag (a cheap one) in the line of macro equipment.  Of course I did not carry all of it every time I made close-ups, but I used every bit of it.  Well I must admit that have purchased other “stuff” for photography, that you probably don’t have.

I have chest waders.  I have never used them in water over my waste so why chest waders?  That product allowed me to kneel, sit, lay on my stomach and back, in bogs and shallow lake water for close-up photography.  I’ve shown a lot of waterfall shots on this blog and there are a few that are made from a very difficult to reach vantage point.  I was wearing waders when I made them.  So I went to the best outdoor/hunting/fishing store and purchased the best waders available right?  Of course not.  Waders do not make pictures.  I did however purchase good ones.  I did not want to be wading in a river and have them leak.  I went to a discount store, carefully checked their best waders out for quality, and saved $50 or so.  They have never leaked.

I also have a small and very portable photo blind/hide.   This comes close, in my opinion, to wasting money.  I bought the best available for this one.  I wanted to make sure it could take the constant opening up and folding back up.  I wanted to know that it would keep me and especially my camera gear dry in weather of all kinds.  I have used it five times. I should have bought  a cheap one or none at all. We are all subject to bad decisions at times. The secret of course is not to repeat those mistakes.

We all get to (thank God) make are own decisions about what kind of equipment we use and how much we spend on it.  I write this blog from the standpoint of a middle class photographer who had to weigh the pros and cons of how much to spend on what.  In the end people will care about your images not how cool your camera bags are or how important you must be to have all of that expensive stuff.

I seem to have been stuck on frogs lately.  This is a three-quarter shot with a bias towards the top…..or something like that.  I love the crystal clear water in this shot. 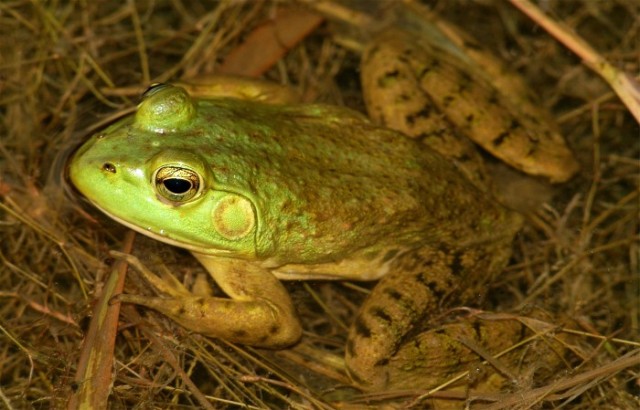 A bird that escaped my cameras for almost 20 years, and then suddenly became a yearly subject, is the American Bittern.  I think it took me 20 years to learn how to locate and spot them.  Once you are successful it becomes easy.  There is nothing that compares to experience.  This one was made at Sandhill State Wildlife Area in Wisconsin. It was a favorite haunt of mine. 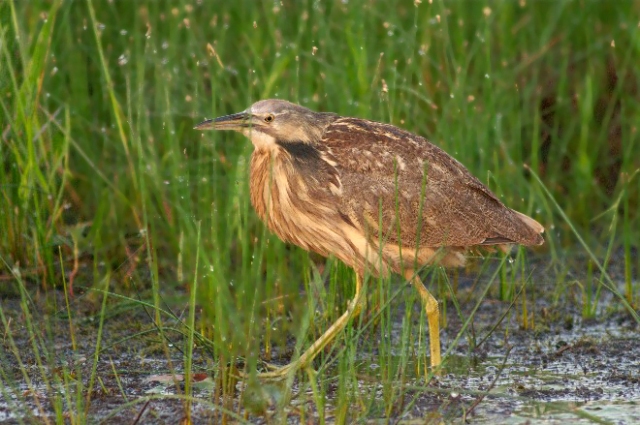 One of my great pleasures over the years was being privileged to photograph small mammals.  The Muskrat is one of my favorites.  This close relative to the beaver gives you many opportunities, especially from the car, to make images everywhere from the distant to the intimate.

Notice that while my second (close-up) image is in focus and sharp, the 1/320th sec. shutter speed was not enough to capture those busy hands tack sharp. 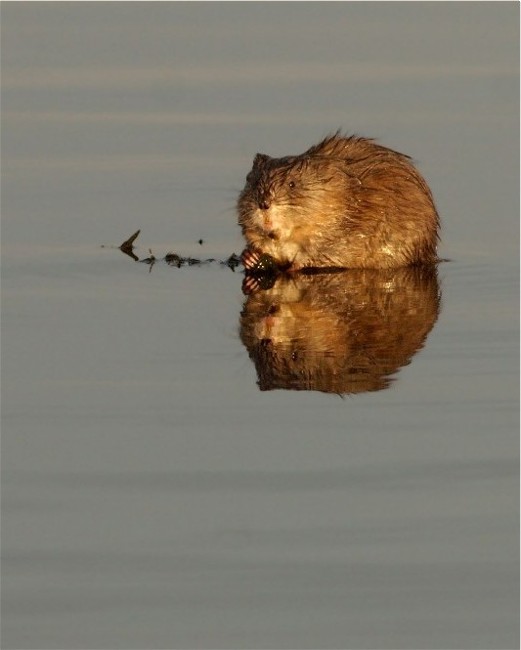 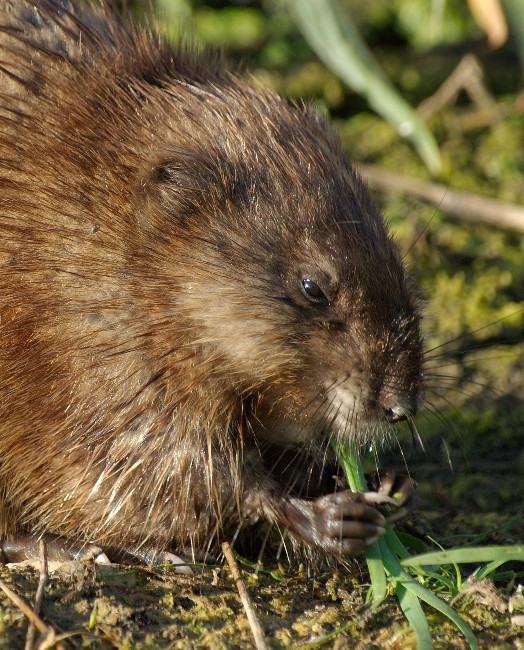 I’ve made a reasonable number of studio shots during my photographic life.  From those experiences there are four 35mm slides left in existence.  I have none remaining from my days of commercial jobs or serious personal work. This one comes from a cold winter’s night when I was bored.  Up went my studio lights and this is the result.   I call it “Carnations on Glass…..with Water”  Actually I don’t call it anything. I am pretty sure I could have done a little better with this. I guess I wasn’t quite bored enough.  The experience of designing images from the ground up, is one that can benefit all of your photography of varied kinds.  Having said all of that, for me personally, it doesn’t compare to attempting to compose and expose an image from something I had nothing to do with. That, is a very challenging assignment. 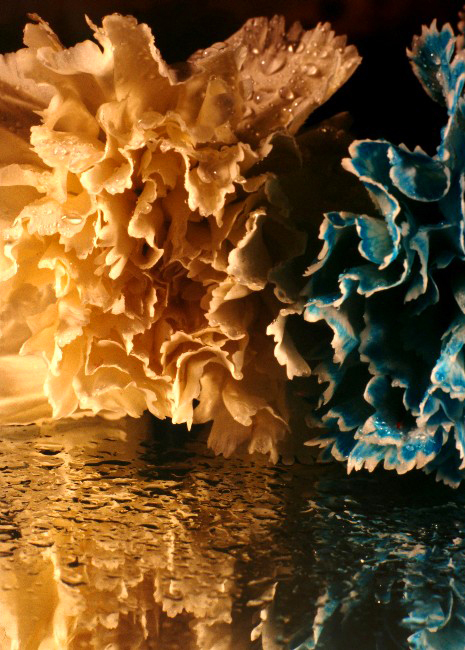 Flowers and their frilly and sometimes colorful message, work nicely as a compliment to architecture.  My preference is older buildings, or at least rough and old-looking buildings.  I like using groups of flowers as a contrast to the buildings, and yes I do think that they can be both a compliment and a contrast, not by dictionary definitions, but by photographic definitions. I think part of that is the fact that the building is old, but alas a blossom has to be new. 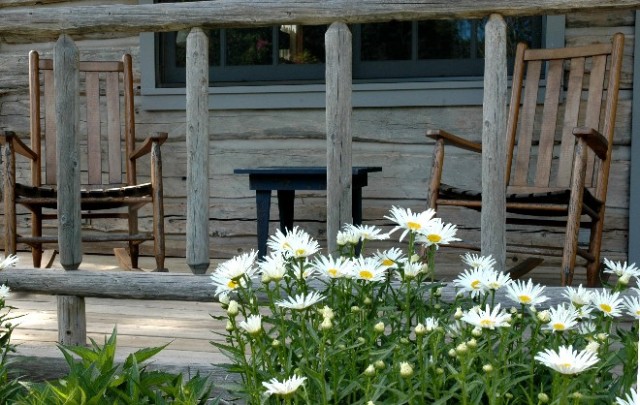 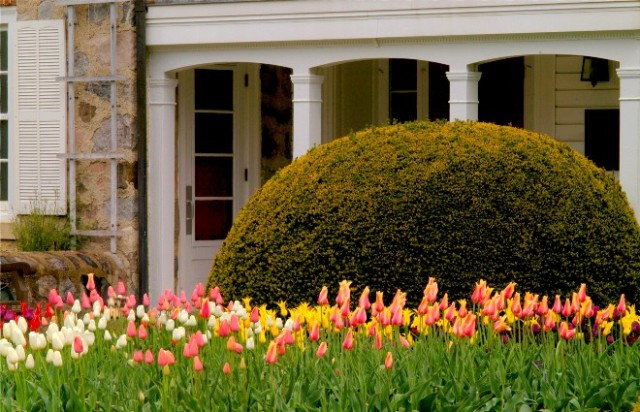 Some years ago I came to conclusion that the yearly calendar seemed to have shifted forward about one month in time.  That might have been prophetic as in most recent years April sure seems like March to me, and September like August, October like September etc.  That would leave autumn still a bit off into the distance, but just the same I will close with a couple of close-ups of my favorite season. 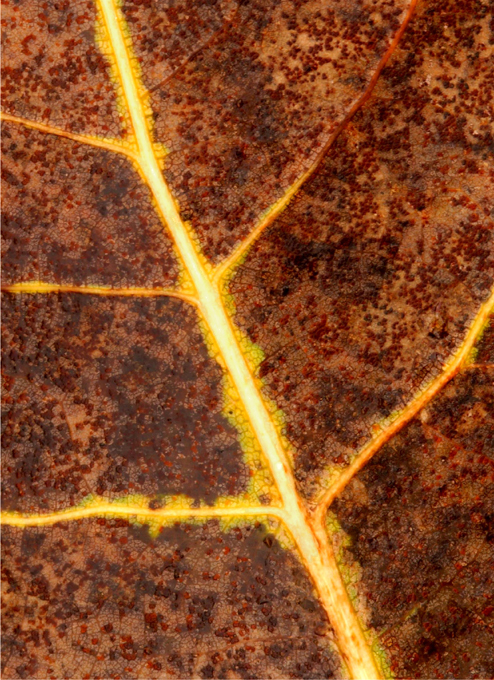 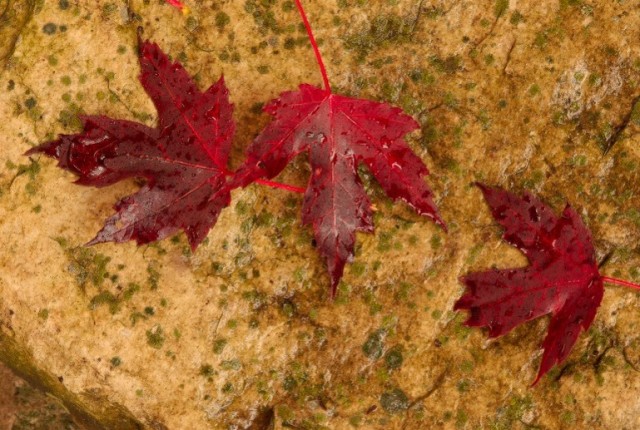