Posted on August 26, 2013 by nelsonearthimages

I started today’s post as I often do, with a selection of random and unrelated photos.  I soon realized that thoughts about one image was leading me right into the next.  It was an accident, but one that has happened before.

Wildlife photography would be easy if we always had bright sunlight coming from the perfect angle with which to make our pictures.  Of course just like any other form of photography, perpetually having the same light and conditions could also become boring for both the photographer and the future viewers of those images.

This Snowy Owl sure does pop in front of that blue winter’s sky!

One light condition that can be difficult is when you have a blue sky day, but a single cloud blocks the actual sun and casts a shadow on your subject.  You still have that blue sky in the background.  I once had someone suggest that I cloned an image of a bird that was taken on a cloudy day, into an image with a blue sky. He was a photographer but it never occurred to him that this combination of light could happen.  These photographic conditions happen on many partly sunny/partly cloudy days.

The Rough-legged Hawk you see below was photographed during those conditions. Not much pop with this shot but a different almost ethereal mood instead.  Subtle instead of in your face.  The joy of photography is being blessed with different light and different moods.

This is another RLH.  The same basic conditions exist in this shot as in the previous portrait.  You do lose some shutter speed under these conditions which certainly makes action shots a bit more difficult.  The ability of many of today’s cameras to push for higher ISOs makes a shot like this a lot easier. Regardless of your camera, you do have to remember to expose for the bird, not the sky.  If your sky photographs wind up a washed out gray or white, reduce the sky’s exposure with Photoshop in the editing process.

The second notable aspect to this flight shot, is that the bird is heading away from the camera.  Most people (I think) would agree that it is acceptable with this picture because you can clearly see the bird’s head.  What about when the bird is flying almost directly away from you?

I was making portraits of this Red-tailed Hawk and collecting different poses, while all the time waiting for the moment when it would burst into flight.  It finally happened and of course it did so in the opposite direction.  I actually love shots of birds heading the other way but understandably most people don’t.  The face and head of this bird shows slightly from under its wing.  Does that make this photo more acceptable?

One thing that makes wildlife photography special is that your subjects have personalities, just as people do.  To me turtles are great subjects and when the opportunity to bring home (photographically) a new species occurs,  I am thrilled. I was spending a few days on the Mississippi River photographing everything I could find and about an hour after sunrise and I took a short trip down a river access road to a campground and trailer park.  I had just turned around to leave and there they were seemingly as big as a Giant Tortoise.  Well maybe not quite, but they were big.  Two large Mississippi Red-bellied Sliders were crossing the gravel parking lot. They were new to my files.  About three minutes later I was done and my newly made friends were back on their journey. If I had made no other pictures (I did) the rest of the day, I would have been happy.

My favorite species of local turtle to photograph is the personable Blanding’s Turtle, followed closely by the Common Snapping Turtle.

If wild animals like turtles and hawks have personalities, so do great places.  At least to me they do. South Dakota’s Badlands are one of those places, but they are also a contradiction.  She shows you her desert like rock forms and you see the sparseness of the place. Then you see those fertile grassy planes and you realize she is teaming with life. She dares you to capture her essence in a picture.

The two pictures below are different from most of the landscapes I have been showing on this blog as of late. Most of my recent images have been wide-angle shots.  Those lenses are typical for grand landscapes, but hopefully I have also illustrated they are effective with intimate landscapes.  With a grand landscape the ideal result is to stretch the entire land as far as you can see.   With intimate landscapes they help to stretch out the foreground to give you more visual space to explore an otherwise small piece of real estate.  These two Badlands pictures on the other hand are made with short telephotos in an effort to compress some tones, colors and textures.  The focal lengths (70mm, 85mm) were still short enough to include a lot of different tones and textures. 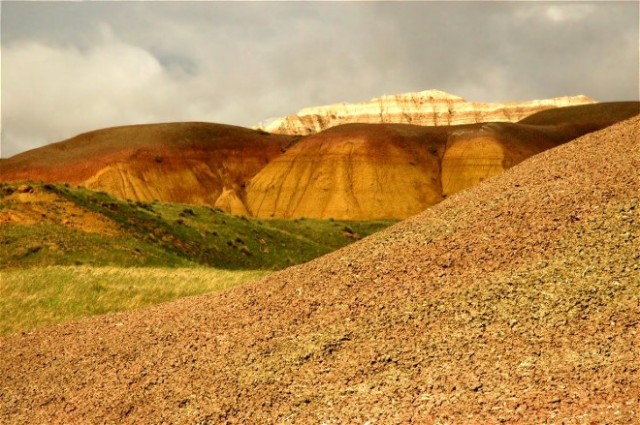 The truth is, using telephotos to compress can provide an even more creative compositional opportunity than wide angles.  The image below could not have been made without visual compression.  The idea was much the same as with the Badlands.  This time I was compressing mostly colors and shapes.  Layered landscapes like this tend to provide depth, and lead you into the picture.  It is a very creative and selective process that I would suggest  every landscape photographer should try. I was closer to my subjects here than in the Badlands picture and I used a little bit stronger 105mm prime lens for the image. 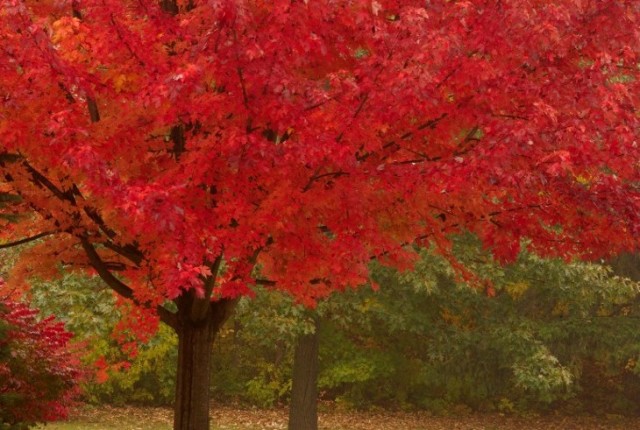 More compression!  For this shot at Great Sand Dunes National Park in Colorado I used a zoom lens set at 220mm.

This first image below is a 300mm sunrise and was made in Yellowstone N.P., Wyoming, and the second is a 300mm shot that I made in Colorado.   I have gone over 700mm for some landscapes.

Despite all of those days after snow storms when I have made winter landscapes, and all the time I have spent with birds in winter, I am still quite sure that I have spent more time on my hands and knees photographing ice than any other winter subject.   From lakes to mud puddles, ice is a wonderful subject. The possibilities range from the obvious to the abstract.

The first picture below is the obvious.  The second is the abstract. The abstract is simply some ice on grass.  It is a “extreme close-up”. 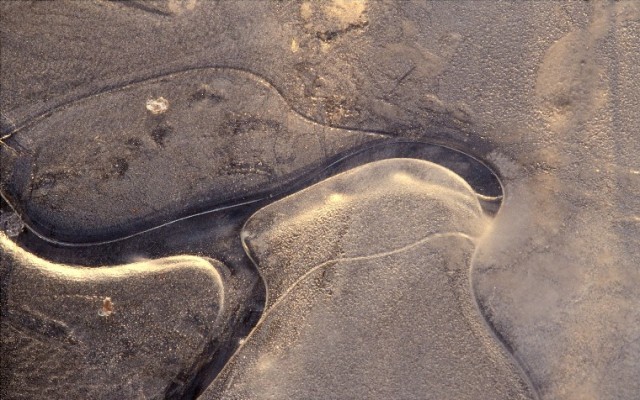 Even pictures of ice have a story to tell. Was it an ice storm, or a rain storm that froze over?  Was the ice formed during the previous night, or did it form two weeks ago, and has thawed and re-frozen a dozen times since?

A part of nature photography is indeed about telling stories.  Stories about a place or a flower or a species of animal.  Grouping shots together is one way to tell that story. It is like adding a few chapters to a book.  The pictures below were made at a Bank Swallow colony nesting site. 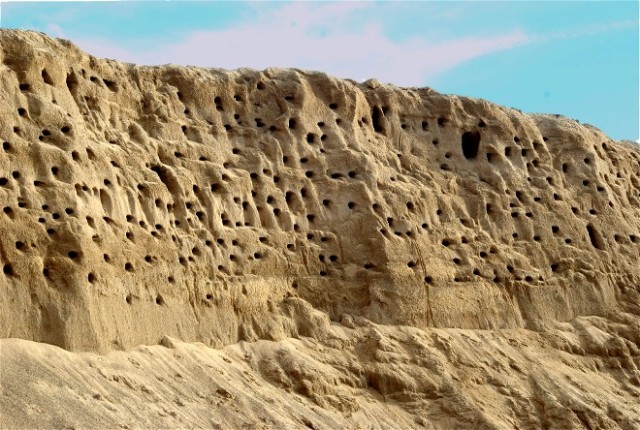 Sometimes the subject is irrelevant.  We all have those days when our photographic vision is sharp and unique.  We share images because we want others to see what we see and that is especially true on those days.  These will be some of your best times as a photographer, cherish them.

Grass, dew and morning sun.  The sunstar is a natural occurrence that is common in nature.  I would never create effects like this with software.  My contribution as a photographer was to use an aperture of f32.  This accentuated the star effect by forcing the light to bend around the almost closed hexagonal or octagonal shaped  lens diaphragm .  If you have never looked at a partially closed lens diaphragm you should. Everything that is photographic that you can understand, can be important.  Below the dewy grass photo you see a (not mine)  picture of a lens diaphragm.  It is like set at around f5.6.  At f32 the opening would be slight. 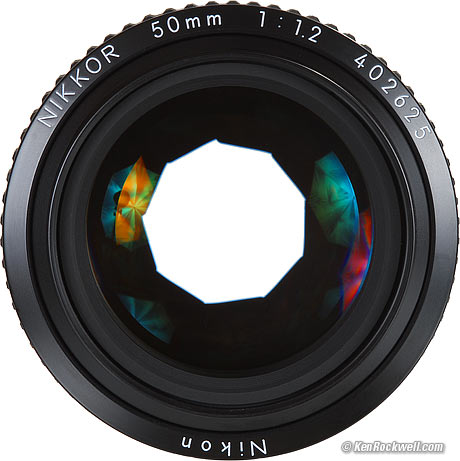 There is nothing like experiencing those days when images seem to jump out of the land and into your camera.  There is literally another picture every step you take along the trail. The truth is that every day can be  like that, we just need to accept and enjoy it.

To be a nature photographer.

I made pictures for fifteen years before I made nature the center piece of my photography.  I still believe that a photographer will make an image of anything they find visually stimulating,  or anything they think is important.  I still have a great love for translating human history and the story behind it, with a camera.  With all that being said if you are like me and nature touches your heart, never stop centering yourself in the natural world.  The benefits reach far beyond sharing or selling images.  For those who are lonely, go to the places that attract nature photographers and you will find comrades to share nature, and break your loneliness.  Most of all, if your world is closing in on you, if your job and coworkers seem to be smothering you, if you need an occasional escape from your family or friends, if the nightly news is becoming suffocating, take a walk in nature with only your camera.  You will find freedom and clear air, yet you will never be alone.  Learn to see and hear the pure, clean sights and sounds that nature emits.  Interpret them with your camera so you can share that with the world. Nature photography is a great tool.  You can feel free but never alone. You are involved in something bigger and more important than yourself, all the while being a part of nature…..not apart from her.

Thank you for stopping at Earth Images!