Posted on August 29, 2013 by nelsonearthimages

As you may have guessed, today’s post is about birds………..but first.

When I write about aperture or f stops on this blog, I have a tendency to use the specific numbers that were available in years gone by.  What I mean is when I am making a point, I use f4, f5.6, f8, f11 and so on.  I omit f6.3, f7.1, f9 and others. That is just an old habit. Actually we did use apertures in between those primary numbers in the old days but we were never quite specific. You would turn the aperture ring on the lens and stop in between say f8 and f11. I was pretty good at it as I could stop in one-third (approximately) stop intervals or right in the middle.  With slide films that sort of fine tuning was often necessary as those films had an exposure latitude of 2/3rds at a stop maximum.

I would also like to follow-up on a comment I made about the “dewy grass with a sunstar”  photo from the last post.  I stated that I would never create a sunstar with software.  What I meant was that my purpose in nature photography, whether an image is as straightforward as life itself, or as abstract as the mind can conjure up, is to show natural effects.  This is true even if I may occasionally use my knowledge as a photographer to put an exclamation point on those effects. Way back in the 1970s we had sunstar filters.  They would screw onto the front of your lens.  You only had to point the camera at the sun or another light source, and it would create the desired effect.  It always seemed a bit cheezy and silly to me. I have however spent some enjoyable hours creating images in my studio (so to speak) building compositions, light and special effects. That was in studio. When in nature, I prefer to accent the natural that accompanies nature. There are those who are even more of a purist than I am, and there are those who will recreate nature at home while in front of their computers.  I guess variety of imagery and variety of people is the spice of life.

One more photo from that batch of Bald Eagle images I have shown so often where they are always posed on that nice perch, on that sunny day, up above their nest.  I have shown this one before and I believe it is the smaller bird, likely the male.  He has just caught a nice little meal for his family. Take note that he is banded. 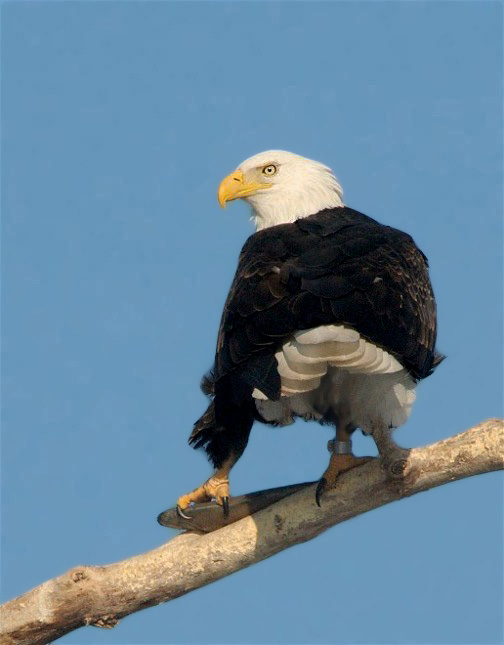 I have also shown many, many images of Double-crested Cormorants perched  along Hwy 49 at Horicon Marsh NWR.  They were all made within a short distance of one another while they dried themselves or dove into the water from the branches and limbs of a few trees.  Most are straight up blue sky shots. The first two images below have been shown before. The third image has not and you will see that the highlights on the bird are much warmer in this picture as it was made just after sunrise.  In fact compare the color of those branches with the branches in the first two photos.  Light changes the mood of a subject and the time of day and the time of year are very important. 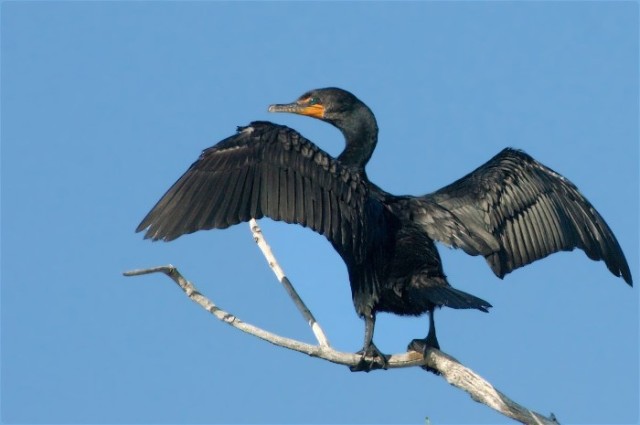 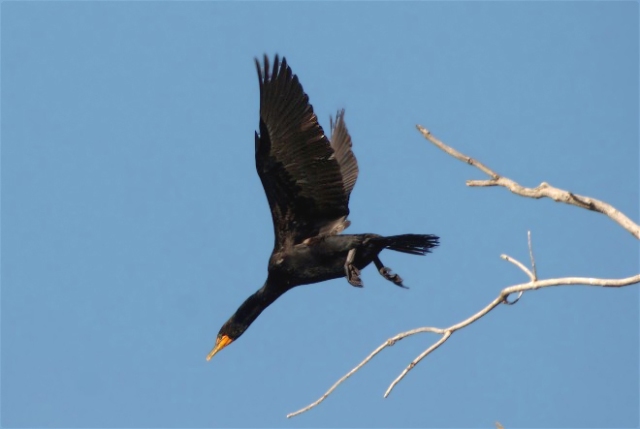 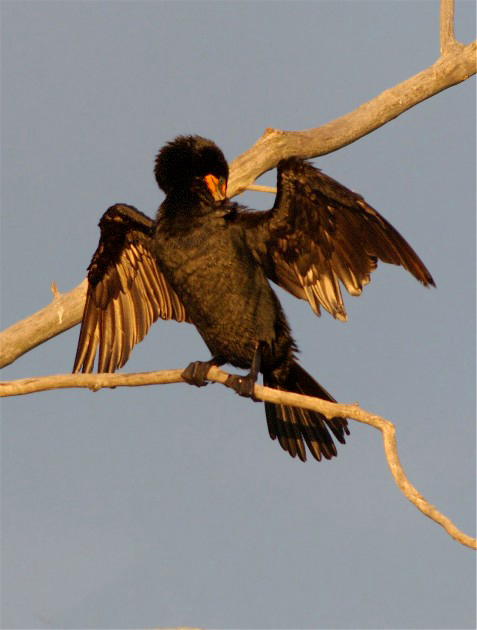 Pictures of birds doing things you don’t often see them do is always a priority for the bird photographer.  Ring-necked Pheasants eating berries in a bush is hardly unheard of, but it is something you don’t see that often. Get more than one bird in the bush and you have had a good morning.  I guess these “two in the bush” are worth “one in the hand”. 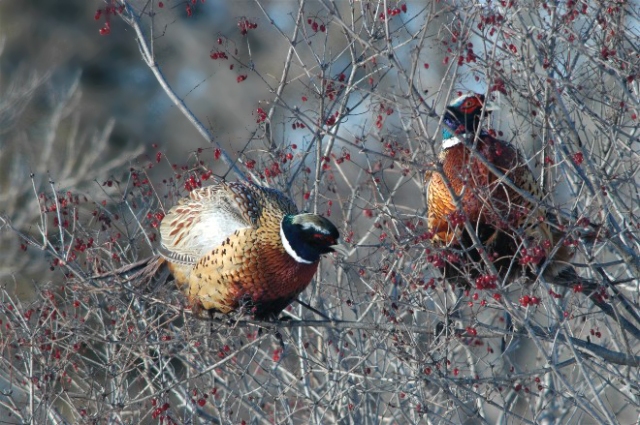 Over the years I have belonged to a lot of different bird oriented email or website groups. They are about birds first, last and in between.  When I wanted to show multiple types of a single species of bird, I would often use the poster format.  Red-breasted, Common and Hooded Mergansers grace this mini poster.  They are all males. 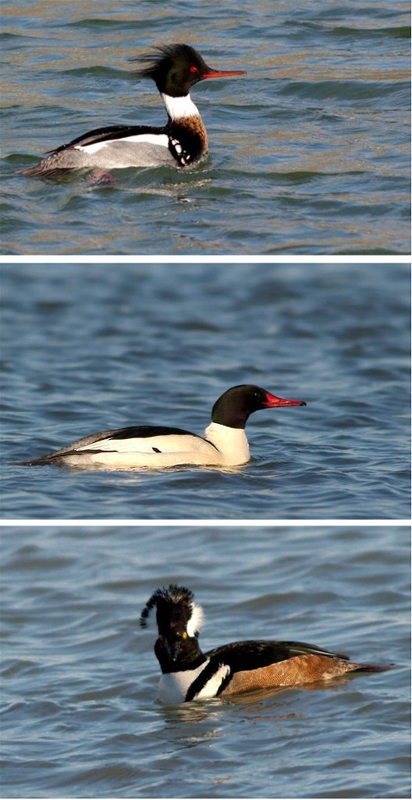 Mergansers are fairly colorful and unique birds.  Sometimes my personal favorites are a little less spectacular.  The markings and graceful style of the Northern Pintail make them a favorite of mine.  This male emotes a sense of class and elegance. 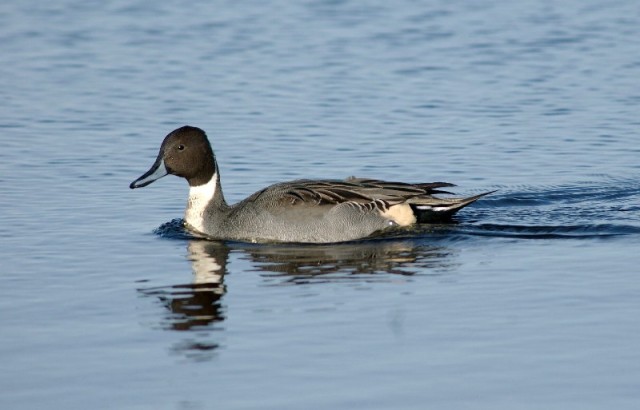 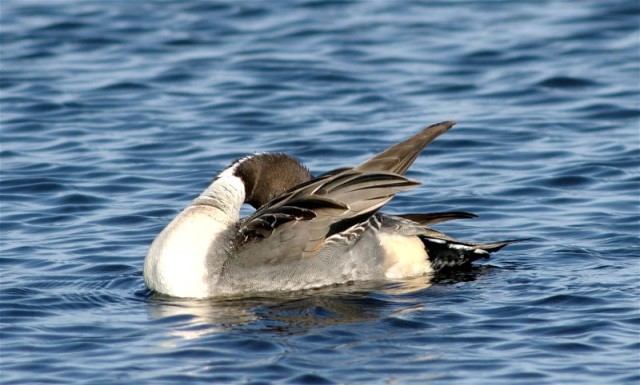 To me, springtime has always been about little birds. I think Warblers are the most popular.  This is a Yellow Warbler. 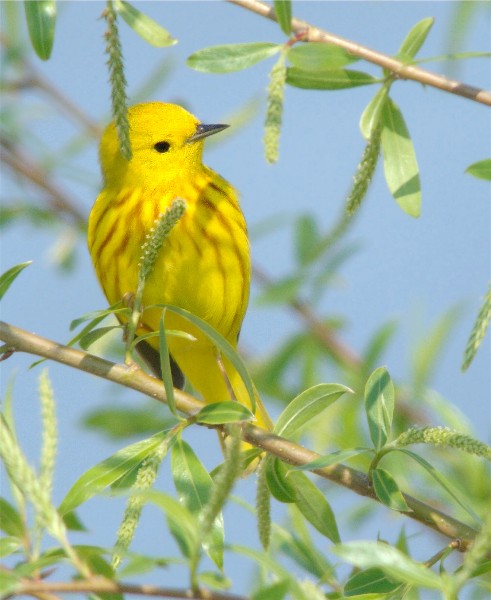 Backyard birds are a big part of the lives of all bird photographers.  The great part about working in your own backyard is you feel comfortable and you usually have the time to move around and try different positions.  I had my tripod down low when this male Brown-headed Cowbird came into view. 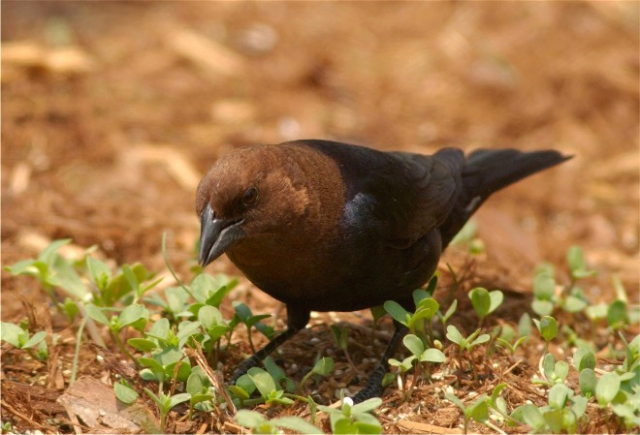 Flight shots will always be a popular form of photography.  Terns provide photographers with a lot of mid-air poses.  They can dive straight at you or hover in one spot.  These Forster’s Terns provided me with one of each. 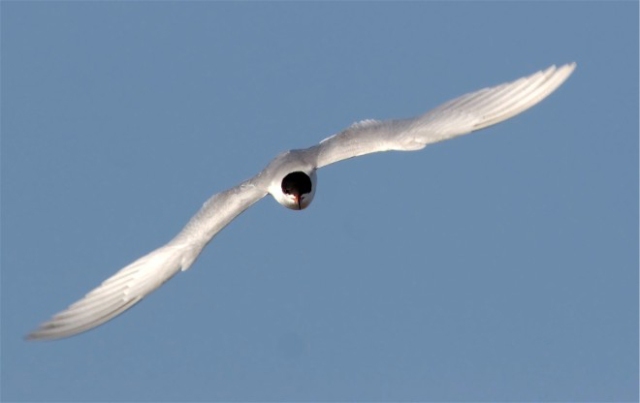 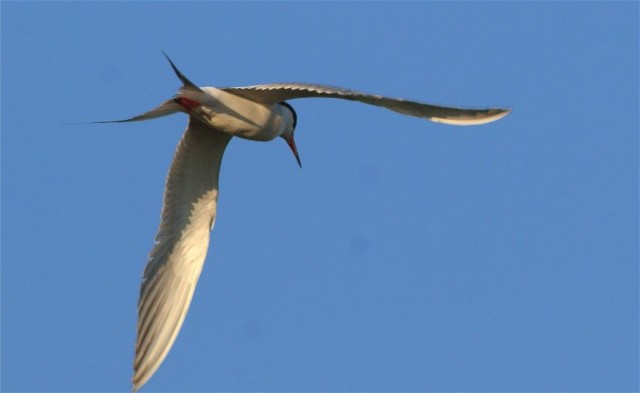 The bird photography information aspect of today’s post, was sort of the photography lite version.  Not a lot of practical “how to” info.  Maybe next time we’ll search out a few more details.