Posted on August 20, 2013 by nelsonearthimages

In my last post I showed some Bald Eagle pictures that had languished in my files because they were simply too cluttered in their appearance. I finally decided to put them to some use and show them to help make a point.  Below we return to the “clean and simple” or  “less is more” philosophy.  I have shown images with eagles on the branch you see below many times previous to this.  What I have never mentioned before, is that those images are of two separate birds. They are a mated pair.  I have also never stated that their nest is just a little below where the bird is in the photo.  In the third image I show both birds and the nest.  The perched bird and the bird on the nest do work well together compositionally, but that darn branch runs directly in front of one parent!  The final image is one parent returning to the nest.  Neither nest photo has been shown before.  They are not of the clean and simple genre but are a necessary part of wildlife photography. 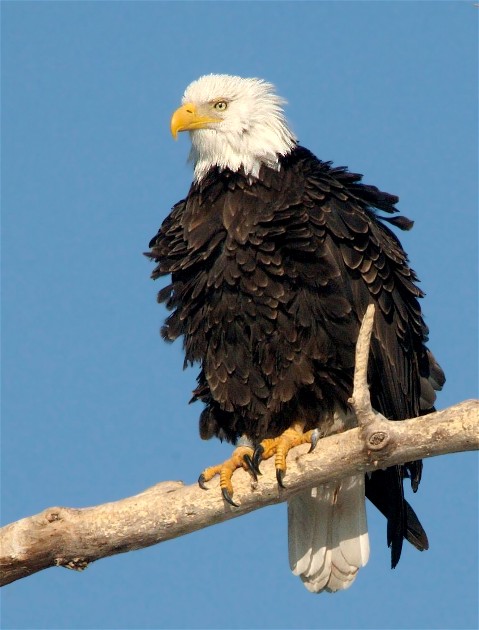 An easy improvement that could be made to the image below would be to clone out that shadow that falls across its head. I chose not to, but it is fairly easy problem to correct, one feather at a time. 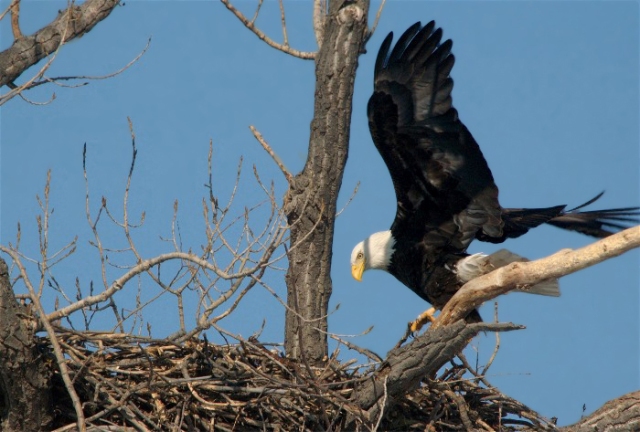 These two flight shots are of different birds, and they are definitely clean and simple.

It’s fun to sometimes treat nature, especially wildlife, as if they are part of a geometric design. Not literally of course, it is just a visual thing. The best way to do that is by using manmade objects as part of that design.  Despite all those lines, they are organized and this image remains, clean and simple. The bird is an Eastern Kingbird.  The image has never been shown before. 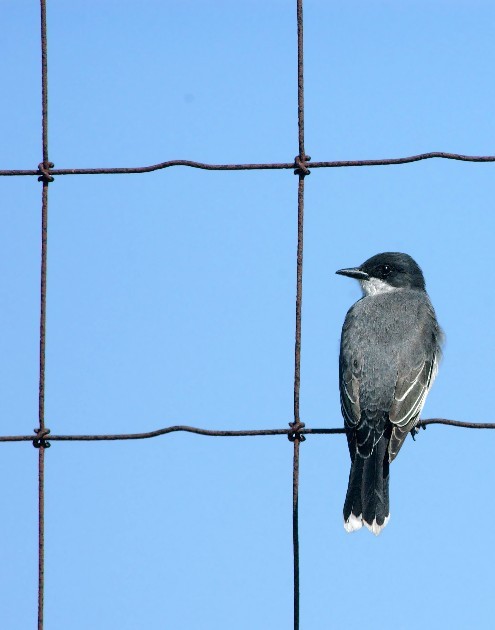 One of my favorite places to celebrate spring is in the state of Missouri.  This place has it all.  There are mountains (somewhat small) forests and prairies. There are several National Wildlife Refuges in Missouri as well, with the best for wildlife photography being Squaw Creek north of Kansas City.  Missouri is both a part of the American south, and a part of the Midwest. The photos below were created in Mingo NWR.  This area is definitely part of the south.  It is below St. Louis and is a better landscape and macro refuge than a wildlife refuge.  The birds are there and they include things like Little Blue Herons, Tri-colored Herons and more, but there are few places to get close images. I have always visited here in the spring and below is a pleasing view of Mingo in spring. When I think Mingo, I think  green.

The most difficult part of making spring landscapes like these, is finding a way to bring order to all of that chaos. That of course is the job of a landscape photographer.  Whether or not you call these images clean and simple, they clearly have been “ordered” by the photographer.  I don’t believe that the first or third images have ever been shown before. 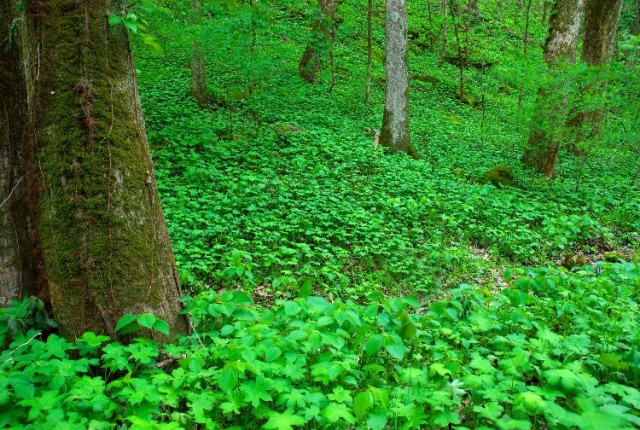 I find snakes to be interesting and photogenic animals.  I must admit that my success rate at photographing snakes is dismal at best.  In my film days I managed a Western King Snake, a Prairie Rattlesnake and a Common Garter Snake.  Since switching to digital, one Fox Snake and the Northern Water Snake you see below are all I have to show. I have shown one particular close-up of this snake while it was off the ground, too many times to count, but I thought showing some of its body would allow you to see the color of the scales.  Reptiles that seem colorless, virtually always have subtle colors on them. I found this guy and about a dozen uncooperative Garter, Green and Water Snakes in a 30 minute period on a hot summer’s day at Vernon Marsh here in Wisconsin.  I would guestimate this guy to be between 3 and 4 feet long. Northern Water Snakes are very feisty with a saliva that can cause an infection, so please be respectful of that fact if you choose search for them.  A simple environment and a lone snake makes for simple images.  I have never shown these two particular pictures of this snake before.

As a child, my pals and I would catch, play with, and release Garter Snakes and Green (Grass) Snakes. They are both amazingly gentle. One day I found the boy who lived down the street treating a Green Snake with cruelty and all of my snake adventures were solo after that.

There is nothing on God’s green earth like a walk on a dewy morning.  Of course a few pictures don’t hurt either.  I have come home from such mornings thoroughly soaked up to my waist.  Every single wet squishing sound I made when I walked  was worth it.  A very simple image. 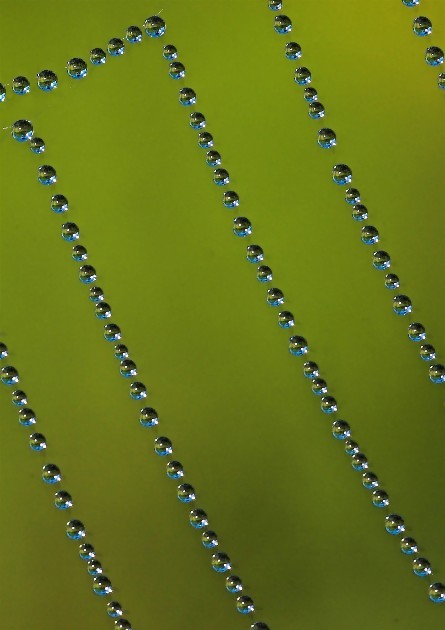 A place I am very familiar with, Bong State Rec. Area, Kenosha, WI.  For a good portion of my life, in particular since 1984 and even more specifically between 2005 and 2011, I could be found at Bong.  I remember putting a lot of work into the simplification of this landscape. 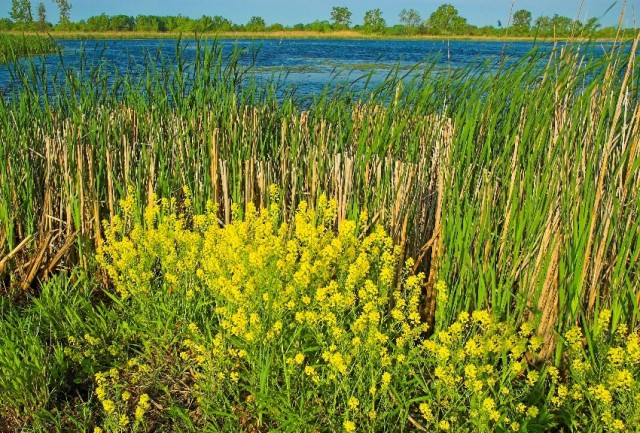 Dwellings  If I am guilty of anything, and I am probably guilty of a lot of things, I am guilty of thinking too much.  About everything and anything.  I was recently thinking about the places, or specifically the buildings and the locations that I have resided in my life.

My childhood years and most of my recent years have been spent in houses.  There were two houses in my youth.  The first was/is a cracker box in the city. It was in a difficult part of town.  The second was/is along the shores of Lake Michigan.  There were miles of shore (nature) to explore.  There were near-by farm fields to hike. There was Hansche’s Ponds (marsh).  Who would I have become if we would have stayed in the city?  Would nature have become the center of my life as it has?

Oh boy have I lived in apartments.  There were/are? apartments in Slinger and Milwaukee, Wisconsin.  There were more apartments in Thornton, Northglenn and Arvada, Colorado.  Living in apartments is unique because you live door to door and wall to wall with strangers.  Most of them remain strangers. If your building has thirty apartments and 50 inhabitants, you will be lucky to get to know 3 of them.  In houses, where we have some space, you may get to know quite a few neighbors.  We were living in a Colorado apartment when we were awoken at 1:00am by a biker gang fight at the swimming pool outside our window.  In another apartment I headed out the door at 4:00am for work, and found the halls full of police officers.  The woman across the hall had committed suicide.  They asked me what her name was and did she seem distraught.  I embarrassedly confessed that I didn’t even know who lived there.  All of these apartments were physically beautiful and in nice parts of the city, suburbs or country.  Who would I have become if I had remained in apartments?

In Hartford, Wisconsin I lived in an apartment, for lack of a better word, that was added on to the back of a mansion that was owned by a doctor and his wife.  They lived in the mansion and the doctor could often be found at the adjoining back door apparently listening for anything that might be heard from my new wife and myself.  Creepy! Also in Hartford, we lived in an upper flat of an old house and in a side by side duplex.  If any of these places would have become a lifelong home how would have my life differed?  How would I have differed?

My first dwelling out of my parents home was a small two room apartment (again for a lack of a better word) in an old dilapidated building above a sleazy bar next to the railroad tracks.  I could stand in front of my rear window and watch the rats devour the garbage in the alley below me.  I had been there for three days and with no bed, had been sleeping on the floor.  I got up in the middle of the night to “brush my teeth”, so to speak, and turned on the room lights to see thousands of cockroaches running for cover.  I had a bed by that evening.  I would ask the question of what would my life be like if I had never moved, but two years later the building was condemned and torn down.

All of these buildings and life styles had a part in making me who I am.  Every step we take in our lives can change where we wind up.  Where we live matters,  and how we live matters more.

4 Responses to Clean and Simple