Posted on July 26, 2020 by nelsonearthimages

There are countless avenues to finding a finished composition for a photo.

There are rules, and then there is breaking the rules. The rules are great and can aide photographers in creating powerful, interesting images. They become a liability rather than an asset only when photographers become too attached to them. Compositional rules are made to be broken.  Sometimes!!

There may be no subject that lends itself to natural, easy visual abstracts, better than sand dunes. White Sands New Mexico is certainly among the best of locations to find such dunes. Working those dunes early, midday and late, and doing so at different times of year and under different sorts of weather, will give you so many options that your head will swim.

When I worked “the dunes” for abstracts, I never hesitated to apply a panoramic crop in the editing process to accent the image.

This first photo is a 1990s film (slide) image which I cropped after conversion to jpeg. I definitely considered eliminating the sky and mountains but I have made so many sand only abstracts that I thought the obvious strong backlight and the sky from which it came, added another element to the crop. 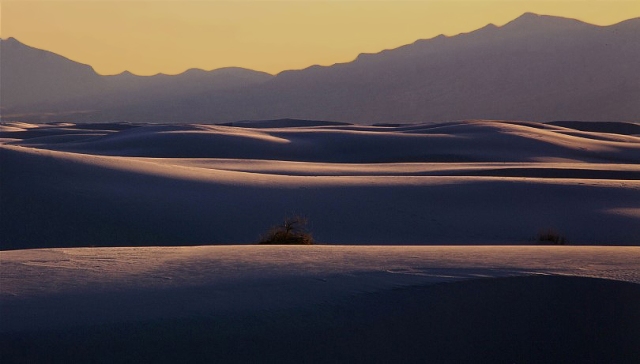 Light is the key to all photography and almost all types of light can be made use of.  Composing the light, is what we do.

The next one was created in the 2,000s as a digital original. The crop was created at home when I “saw”  a nice division of the lower sand and the upper bank while viewing it on my computer. The light here was perfect to give just enough shadow below each ripple of sand to create textured patterns.

We do not get to pose our models when we are working with wild and free animals. We shoot, shoot, shoot, and we sit and wait, and we hope they will strike a pose that is either cute, pretty, or shows some sort of natural history information.

Small mammals such as this Thirteen-lined Ground Squirrel are naturally cute and almost seem to pose themselves in ways that we as photographers might find adorable or at least interesting.

My technique was to always keep my eye at the camera’s viewfinder, and pull the trigger whenever I thought anything worthy of note was going to happen.

Notice that I composed, either at the time I clicked the shutter or when cropping, my little friend almost “symmetrically even” in the first image. He/she was standing almost straight up and retaining an evenly balanced image worked best. In the second shot where the he/she was leaning towards our right, I moved the body (in the photo) to our left so it was leaning into the picture frame and not out of it.

We can’t program or force cuteness. We can however always be ready for it. 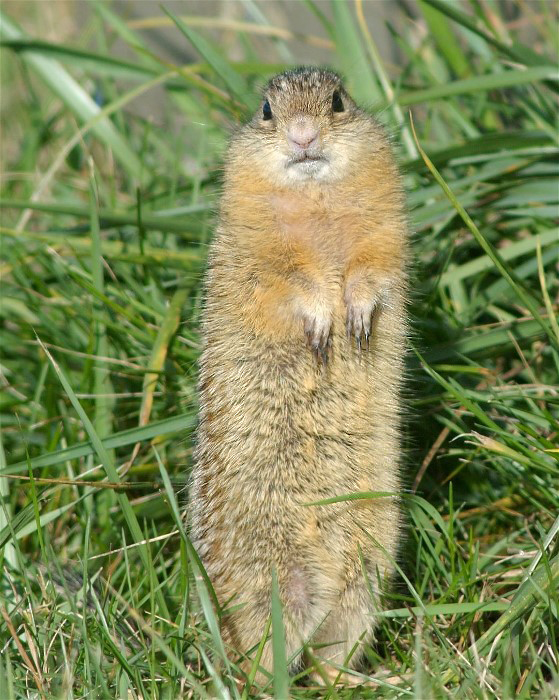 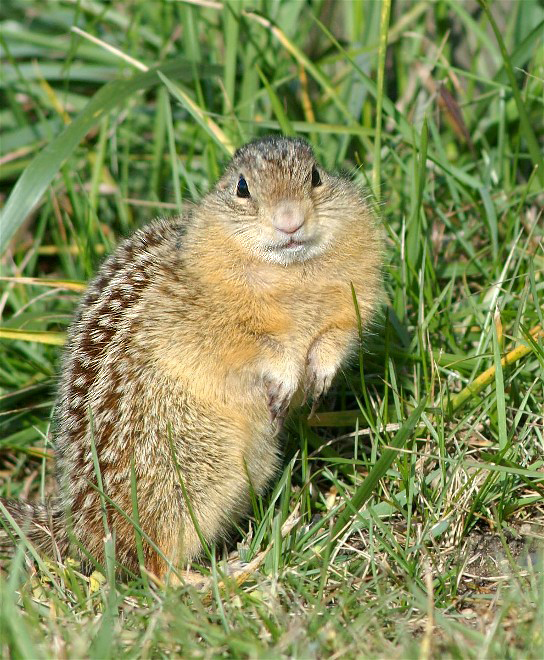 Elegant birds such as wading birds, go quite naturally with “artsy” types of poses. Give a bird a chance, and they will come through. We just need to be ready.

This Green Heron struck this pose immediately and I responded. I gave thanks and moved on. Just another day at the office, but nature is such a great office!

The bird had appeared to be hunting for frogs in the shallow end of a small pond.

It is true that frogs are a bit less elegant than wading birds. It can be quite to difficult to move into a position to capture good pose or composition. My answer here was to shoot regardless of the pose, but keep in mind some compositional concepts, and do the best I could.

This Leopard Frog was facing away from me, so did all I could do. I composed the frog to in the lower right third of the picture frame. I twisted my tripod and camera to point the subject towards the corner of the image that would appear to be the farthest away from the subject. I left room in the direction it was looking. To me, the Duckweed plants were a bonus. They almost mimic the texture, tone  and color of the frog.

Usually when we are out searching for wildlife to photograph, backlight is an enemy we attempt to avoid. In this case, I could not have been happier.

The sunlight was entering the picture frame from the back, the top, and slightly to the left. The bright landscape actually bounced some light back onto the faces and bodies of these Pronghorns in Colorado, to allow for some soft a gentle detail. No harshness.

As is often the case with wild animals, they themselves struck a perfect pose. I composed this image very slightly, only in the sense of up and down and left and right, thanked them and moved on.

This Mountain Goat (also in Colorado) was climbing over some rocks at over 14,000 feet of elevation, and this was one of two images I managed to get. Where the animal is in the picture frame, and how much sky it has above and around itself, was my contribution to the composition of this image.  The rest, belongs to the subject. 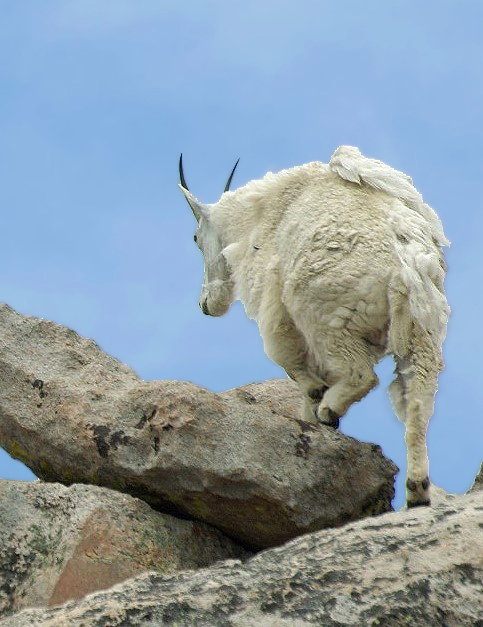 Other than the crop I made while editing this image of this young Red Fox, the comp here belongs to the subject. Most of the time, it does. I have often said that the wild animals we photograph are the artists, and we just capture and share it.

Okay, now we’re talking something different. No, I didn’t miss my focus on this Goldfinch. If you look at its perch, you will find it in sharp focus. As my subject began to shake in violent back and forth turns (might have had mites), I actually slowed down my shutter speed (1/100th sec.), by stopping down my lens and increasing the depth of field.

I admit, I just never could share this one before. If there were more sharp items near the bird, this might be fairly interesting. Also, a shutter speed that was slower than 1/100th sec, would also help  blur the shaking even more, but I was using my 500mm f4 lens out the car window by hand, and even the metal perch would have been fuzzy then.

The depth of field in any image, is a part of the comp.

Getting up close to subjects, and having the picture frame become filled with the subject, does not eliminate the need for careful compositions.

The depth of field is very narrow on this Thistle. Only the parts very near us, are sharp. I needed shallow depth of field to help eliminate details in what was a distracting background. The area that needed to be sharp, is.

Once again, depth of field is a part of the comp. 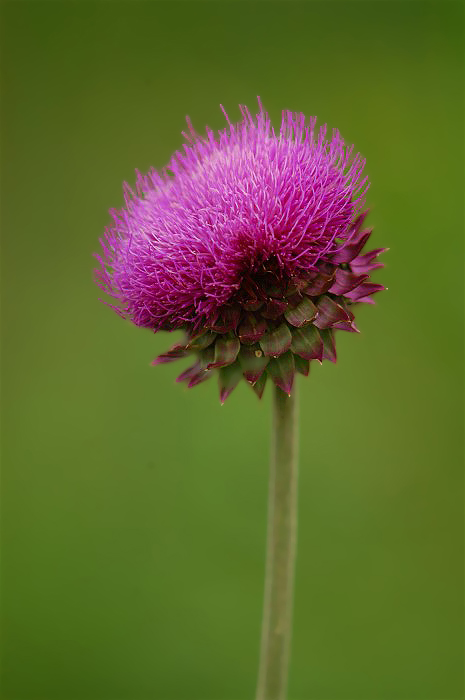 This gull feather was discovered by me on a Lake Michigan shoreline. I enjoyed the fact that it was covered with beads of water, accumulated from the evenings high tidal waves. There isn’t much to a comp like this, but the image is composed. I could not think of anything that would be anymore boring than having that feather, dead center.

This is the very same image, only enlarged via cropping. Notice that most of the open, negative space I had in the first image, has disappeared.  Still, I was able to retain the basic composition.

Every image deserves a comp.

When you look at this photo of a Badlands N.P. rock and earth form, one might ask,  how many comps could you have made? There were countless, endless varieties of compositions that could have been used here. Move in closer, move away further. Vertical or horizontal? What to leave in, what to leave out. I even consider my decision to create a black and white rendition of this colorful scene, was a matter of composing the image.

Now I will say, this comp is as traditional for what I am showing here than anyone might imagine, but the fact is, that my original color image was likely composed differently.

Composition, need not be a tale of unique and unusual (or bizarre) ways to look at a subject, although it can be. It is however, the part of image making that most makes each of us an individual, with a story to tell.  The way we see it. It is a legitimate time in which we can be selfish.