Posted on September 27, 2019 by nelsonearthimages

This first photo is from Popp-Hackner Photography, and was created at
Salzburg Lake in Austria.

This flawlessly (and classically ) composed photo has it all. Mood
from the mist, and “layers” within the visual journey, as in
foreground, middle ground and background, color and pop.

This next image is a nice picture of an American Goldfinch but it is
soooo much more. Exquisitely composed and superbly balanced, that
beautiful bird could just as well be a flower or a plant.

Of course, when make the picture, one first has to hunt relentlessly, and move into position slowly, and select the lens to be used with purpose, and then focus
carefully, select the shutter speed/aperture combo perfectly (keeping
the background out of focus) and then make the subjects, and yes each
subject is equally important, and as in proportion to each other as
possible, and then click the shutter before the bird moves. That’s
all!! Tim Chickering is the one who accomplished all of that.

Seasons come and go, and at least in this part of the world, summer is
getting ready to say adios, and autumn is preparing to share her
glorious colors with the world.

The frost is a wonderful blessing to this photo but Ben’s careful
composition and adequate depth of field (which is a part of the
composition) are what makes the picture beautiful and special. 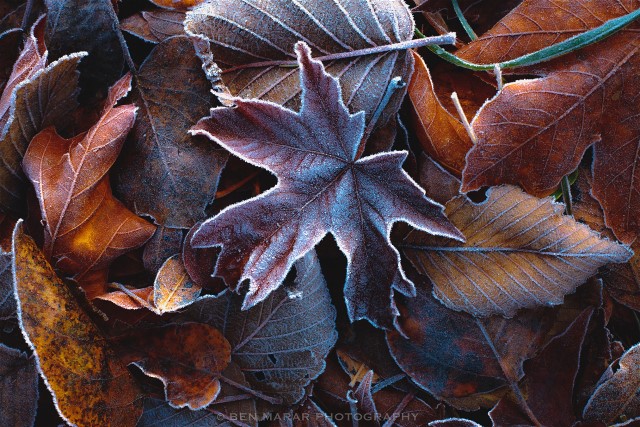 I always attempt to comment on my own (old) images, with a willingness
to allow for self-depreciation. Just like when I share the images from
any photographer, I will tell you what I like about it, but unlike
with other people’s photos, I will also tell you what I do not like
about it. Hence forth, the self-deprecation.

I often use other people’s photos for ”teaching moments“, but they are
used in a positive sense. I do not share the work of other
photographers to show what could of or should have been done.  With my
own images, I am willing to do so.

I have chosen a couple of autumn photos for some exploration of one
sort of photography, that being landscapes, with a leading line.

The images below were created some years ago in early fall on a
wilderness road in Wisconsin’s Chequamegon National Forest. I have
shown a different photo from this group many times
previously. These images are not cropped in any way so I could keep the
vision I had when I created them.

So what’s the point to these photographs? What I am trying to show?
Vertical or horizontal?  Are these, images of the fall season on a
wilderness road, or pictures of a wilderness road during the fall
season. Do these two images tell a somewhat different story?

To me, the vertical, which mimics the direction and narrow width of
the road, magnifies that narrowness as we travel up the road, and the
road itself, which is accompanied by a forest that has begun to share
with the world, its fall colors. Notice, the road does cover the
entire width of the image at the very bottom, which also gives us a
feeling of “road” over forest, from the very start.

The horizontal, leaves us deep in a wilderness forest in all its
glory. The road is both our path to that glory, and perhaps, our only
way back to civilization. We are enveloped in early autumn.

In both cases, we are left to wonder what lies beyond that curve in
the road at the top of the hill.  In the vertical, that curve is
pushed back in the picture frame do to that elongated format. With the
horizontal, it’s just a short walk.

Both images were made with the same 105mm lens. It is actually a macro
lens. I have used that lens for many landscapes and some wildlife. 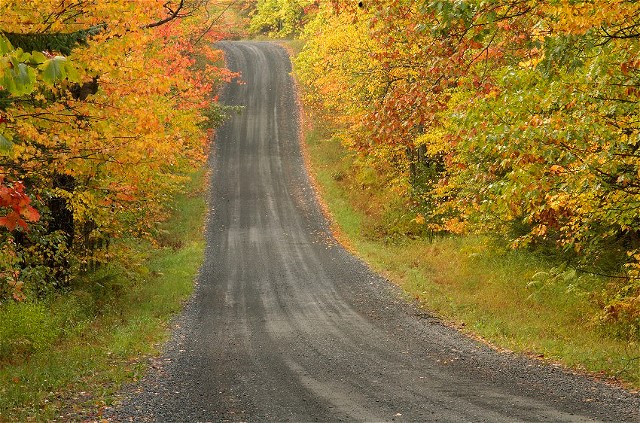 There are a fair amount of “classic” subjects and treatments in
today’s post, and hopefully you enjoyed viewing them as much as I
enjoyed presenting them.