Posted on December 17, 2016 by nelsonearthimages

Often life and photography mirror each other. As people, we vary in what we see, because we vary in how we look at any given subject. Even when we come from the same position, we frequently see different things.

How tall are those sand dunes at Great Sand Dunes National Monument? Well they reach 700 hundred feet, but in one image below they appear to be at least 2,000 and in the other, maybe only 50. They are consecutive pictures, made from the same spot, with only a change of lenses (and where they are pointed) used to cause future viewers see these pictures very differently.

We can see life itself quite differently with only the slightest change in perspective. That change is often created by others, by how they disseminate information. I altered the information in the pictures below by lens selection, and therefore giving future viewers the impression that the same dunes, are either taller, or shorter than they really are. Much like the mainstream media, and the powers that be, who create an environment where you will “see things their way” by adding to or leaving out information in what is happening (or has happened) in the world around you, and make you see things their way. You can do the same photographically. In both cases, most people who view your pictures, or view/hear the news, will not question what they see or hear. With photography, the reason is not quite as scary as that of the media.

What’s this, a Sandpiper with one leg? I caught this fellow preening and resting one leg simultaneously. That would be a neat trick for us to do, but it is simple physics for a shorebird.

When you catch (photographically) a subject in what is a normal act, but abnormal by human standards, you might fool the uninitiated, or ignorant. While the bird has to actually perform this balancing act for you to catch it with a camera, when you share the image it can give false impressions about your subject. A perfectly normal act, but a false conclusion. It is entirely plausible for someone with no knowledge of birds, to think that all birds in this species have only one leg.

Any viewer might have questions about this subject. Are these objects giant land masses captured from an airplane? Are they individual sections of cracked mud about two feet across, captured from a near-by hillside? How about four-inch sections of tree bark made from right next to the tree? Maybe they are small fungi or lichen about a couple of inches across, made with a macro lens.

What they really are (the truth) may be irrelevant to me. Maybe I don’t want you to know. Maybe I just want to confuse you.

A little information without the whole story is often intentional in an effort to leave people confused and without the truth. Not so often with pictures, but frequently with news organizations.

Everything is a matter of perspective. As photographers, we choose our perspectives through lens choice (what we leave in, what we leave out), tripod height, timing (season, solar eclipse etc) and our actual physical locations at the time of clicking the shutter. Those in charge of feeding us information about the world around us, do exactly the same thing.

I love the Badlands of South Dakota and I also love storms and photographing rock at sunrise or sunset.

If you have ever been to the Badlands you might say I’ve seen that rock form, but it is not that color. You (meaning me) fudged the color!! The rock was indeed that color, because the light was that color. The storm in the background, also helped the rock “pop” out from that background. This is a legit picture that imparts honest information about this subject, but it could also give you misleading information. I could leave you artistically intrigued with this location, or I could explain or share pictures of this rock under different light, and different conditions. Broadcasting the news only when the story about a subject is either negative, or positive is intellectually dishonest when you are in the business of reporting the news. Sixteen years of first reporting only the negatives about George W. Bush, and then the positives about Barack Obama, have been living proof. I won’t go into the current situation.

There is as much information within the corners of this rectangle, as I could capture to share with future viewers. One Forster’s Tern was fishing, another came along, and the first bird chased the second bird out of its territory. I just barely managed to get both birds in the picture frame. I did the best I could, to honestly give you the viewer, an opportunity to see and understand what was happening. That’s all you can ask of anybody who shares information or news, but it should at least be asked of the “mainstream news media”. 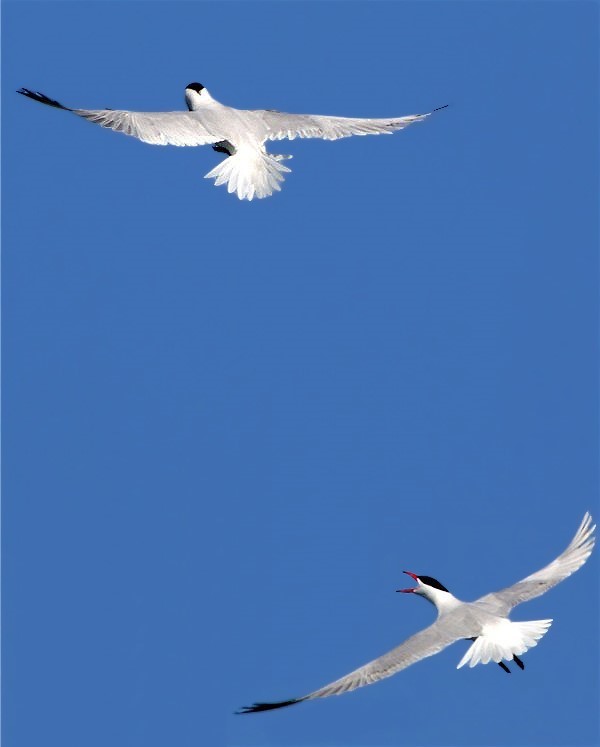 Too often we believe what we see, but even more often we see only what we want to believe.