Is It Over Yet?

Posted on November 15, 2016 by nelsonearthimages

It feels sooooo good to go back to writing about photography, slice of life items, and other less divisive subjects, after writing so many political posts recently. Do note, there is no such thing as something “being over”. Not in today’s world. There are potential challenges in the near future, so the battle, revolution if you will, continues. I say that to warn you that there will be political/social articles on the horizon here at Earth Images.

In the mean time, I just feel like enjoying the act of writing about photography.

As I so often do, I grabbed these images at random from a mobile hard drive, and then decided what I wanted to say about them later.

One of the things I miss so much about nature photography, isn’t necessarily the art of image making, but the bringing home if you will, new stock images. New places, new flowers, new insects and especially new birds. The excitement felt when a brand new subject could be placed in my files, is indescribable. Stock photography is not entirely about adding new names to the list, but the more subjects you have that editors/art directors want, the more success you will enjoy. In my photographic life, each and every time I captured the likeness of a new species of bird, I did a little dance inside my head. If they were technically proficient, or even artful, I was happier.

The bird pictures below are shared only because they bring back memories to me, as to the feeling I had when they were added to my files.

The Northern Bobwhite Quail, is a silly sort of bird. If they decide to tolerate you, they will really tolerate you. My first Bobwhite pictures came on film in the 1980s, and these were made as digital originals in 2008. They (the birds) tend to stay in one place and provide very little action, but I love them anyway. 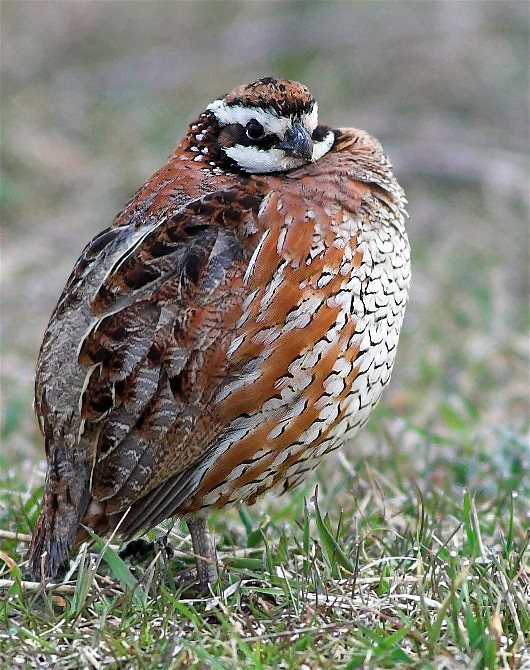 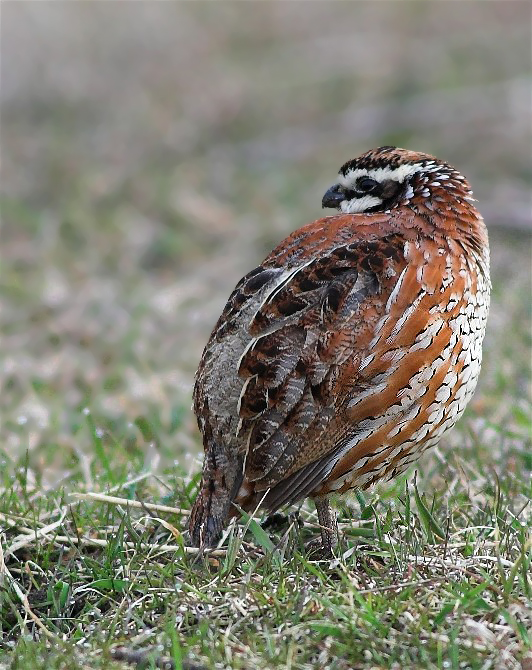 The common, but beautiful male Baltimore Oriole is another species that I first captured on film. The problem with smaller birds and film, is that you cannot crop a 35mm slide. Often the photo editors would accept a distant but sharp image, and then crop it in the reproduction phase. 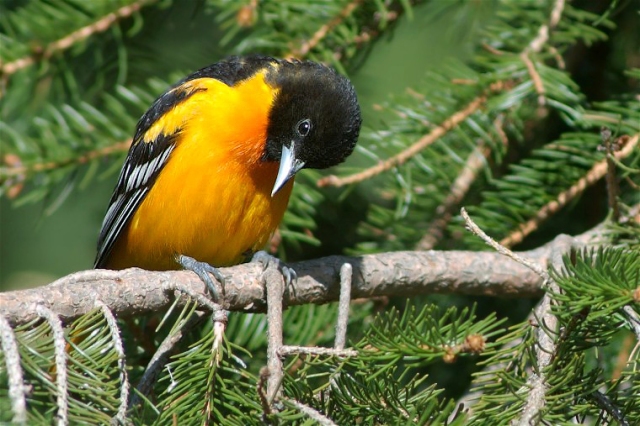 Every colorful, neo-tropical bird I added to my files, called for another dance (in my head).

The Black Tern, Caspian Tern, and the Western Grebe were added to my files between 2006 and 2008. I enjoyed my time with those Blacks and Westerns, but I have spent hour after hour in the company of Caspian Terns. They interact continually and will court (this picture) and mate during their stop offs during northern migration. I live within a couple of miles of two of their favorite Lake Michigan stopping points, and therefore sometimes daily visits were performed. 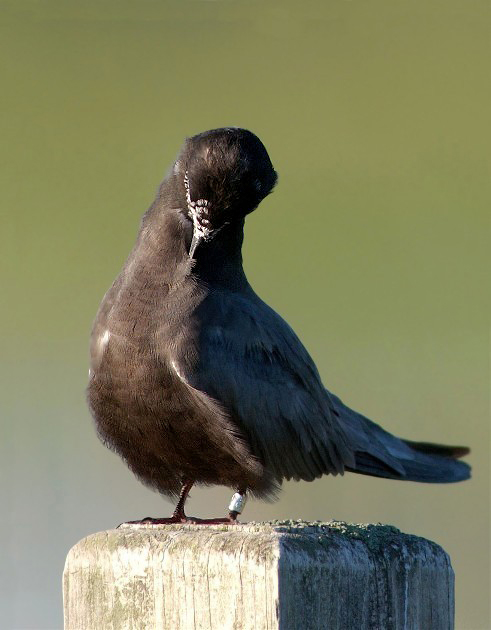 Flowers were another subject that would enhance your files in the eyes of any magazine/book/calendar publisher. I first photographed the endangered White-fringed Prairie Orchid in the early 1990s with my medium format Pentax 645 film camera. Ugly light with no photographic umbrella to soften it made for hideous images. Around about 1999 I made some more pictures with my 35mm film camera and this time winds so heavy that even my wind stopping umbrella would not suffice. Finally in 2009 the appropriate conditions existed and I created a few usable images with my digital camera.

Most of the time, when I was shooting a special species of flower like this, I opted for pretty straight forward images. My goal was to make a good picture of the flower, as artful as I could while keeping in mind, that the image wasn’t about me, it was about the flower. Of course, with many sorts of common flowers, I tried to free my vision and my imagination a little bit more. I actually had more success being published with common flowers that I interpreted with shallow depth of field and slightly more abstract ways of looking at them. Usually in art related calendars.

The thing I enjoyed most about stock photography was that it was/is subject driven. It forced me to get “out of myself” and focus on subjects instead. Stock photography is about 75% subject, and 25% photographer. It quells the ego and forces us to examine what’s important about the world around us.

Red Fox are common in North America and Europe, but they are one of my (and every other wildlife photographer) favorite subjects…..ever.

This was the third Red Fox I ever photographed, and my first with a digital camera. The year is 2008 and she was a most cooperative little vixen. Here she is taking a rest from her six babies. Shortly after this she got up, made a tour around the rocks that held her den, and almost seemed (to me) say, see ya tomorrow as she slipped into the den. I was there the next day. 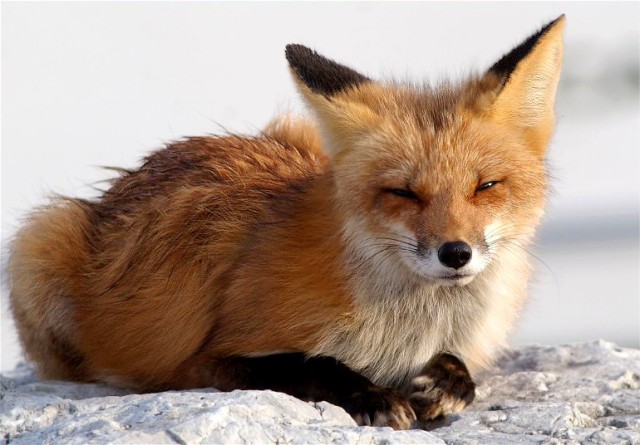 There are a lot of ways to look at water. I especially enjoy small sections of moving water. The light will affect the mood but the shutter speed and the corresponding f stop you select will mean even more.

It’s no secret to anybody who knows me that I love turtles, lizards and frogs. This young Green Frog believed I could not see it, as frogs often do. I only stare at critters like this through the camera lens. I depend on my peripheral vision for everything else. I do that with some birds as well, but most mammals are not fooled by this technique. 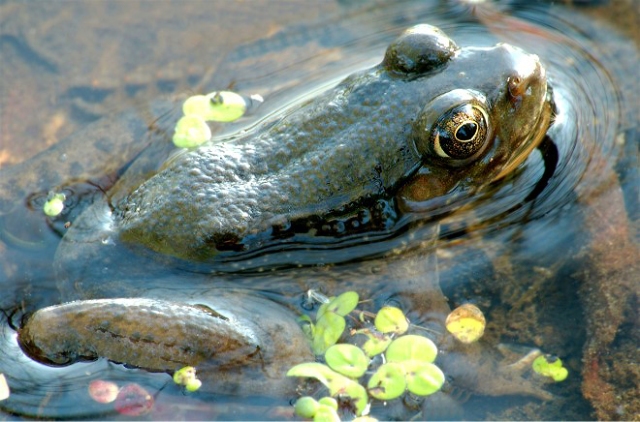 I’ve also photographed my share of spiders. They can be beautiful and interesting animals. I needed to move slowly as to not knock the dew off the web for this picture. I also needed a very careful and select focus to make sure my spider was sharp while all else drifted into a blur.

In nature, macro photography will bring you more subjects, with more different ways to interpret them, than any other genre. It will also teach more about the natural world, than wildlife or landscape photography.

I try to not forget those who came before me, and made what I do more possible in every aspect of life, including nature photography. I have featured photographers from the mid 1800s to the 1990s, and today I honor the late, great nature photographer John Netherton.

John Netherton was one of this country’s premier nature photographers. His work spans three decades and covers the breadth of the natural world. Along with his twenty books, John’s photographs have been published in periodicals such as Audubon, National Wildlife, International Wildlife, Popular Photography, Nature’s Best and many more. John also shared his experiences and tips in a regular column in Outdoor Photographer.
John was also known for his work in the environmental community. He served as the president of Friends of Radnor Lake for many years and received several awards for his environmental stewardship. American Photographer Magazine named John a Friend of the Earth, citing his personal philosophy, respect for nature, and commitment to recording it with passion and sensitivity.