It seems as of late that I’ve been titling more and more posts with a single word. I am not sure what that means, but I’ll confess that laziness could be the reason.

Observing ego, is a favorite hobby of mine.

Personal ego is a funny (or not so) thing, we hate it when we identify it on others, at least those that we don’t like, and ignore it or don’t even see it in those we like. We never see it in ourselves. Ego is tender, and can be bruised easily.

Ego can be the sinful pride that the Bible attributes to Lucifer (better know as Satan), or it can be a self-inflated sense of worth, with any or all of us.  I am sure that many readers of this blog would suggest that the rather pointed and sharp opinions I usually offer, are proof of my own ego.  I of course disagree with that, but I do not disagree that I like everybody, have an ego.

Major athletes are among the world’s most egotistical humans. Many of those sports stars have mastered the act of false modesty, and many have not. We like those who pretend to be modest, and hate those who do not. In general, the confidence that comes from ego, is necessary to perch at the top in the competitive world of major league sports.

Politicians, are certainly master egotists. If a person does not believe that the public will vote for them above all others, and that takes ego, they will not run. While some ego is essential to run for any political office, egos that range from large to massive accompany those who run for the Presidency of the United States. The question becomes do they also have a true belief in public service and a love of country? Oh yes, also are they competent? Ego without competency is scary, and America is on that road right now, no matter who the next President will be.

Ego exists everywhere including in each and every one of us. The question becomes, is it destructive, or is it beneficial to doing a good job?

Even in the world of photography, there are large egos. Some belong to well-known photographers, some to those in the middle of the pack, and some at the bottom. If one is going to display large “photographic ego”, that person better come through at a level higher than those around them. If the ego is general and supersedes photography, then they had better hope that a certain likeability accompanies them. We will forgive ego, even without false modesty, if we like the egotist.

I admit that I don’t like ego, including the times I have found it infecting me. Just the same, my most successful times included at least enough ego, to care whether or not I was doing a good job. The secret is of course, rightfully dividing the ego we use to do good, and the ego that says “ I am better than you”. That line is thin at times but most of us know it when we step over it. We can only hope, those that who don’t see it will discover it, maybe even trip over it, before they go too far over the edge.

I have known people personally, who’s ego gets out of control at times. Often the only salvation for those people, is having someone in their life who will (metaphorically) shake them, and shock them out of that state.

The credit for this great image of a very beautiful Northern Craig Lizard, goes to The Imbabala Biodiversity Center.  It was added to my Flickr group called Earth Images. 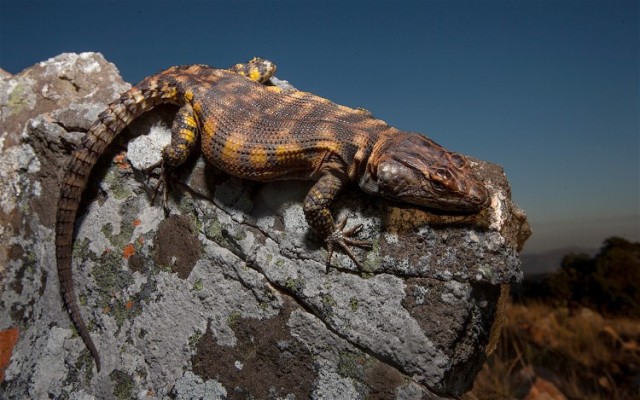 I will repeat what I have said in the past, my biggest regret as a photographer is that I did not make enough images of lizards. That’s right, lizards. They are visually incredible (to me) and I find them generally friendly, likeable critters.  They are highly photogenic!

This image was also displayed in my Flickr group. I do not know what species this stunning, gallinaceous type bird is. Nicolas Merino made the picture and I am glad he did.

Facebook friend Jessica Kirste made this great aquarium picture of a Jellyfish. Great pictures are everywhere. What color and grace. Great job Jessica!

It has been way too long since I shared a Deborah Sandidge photo. Deborah is one of the best at combining man’s light with nature’s. This picture was created in Capri and I suspect that a workshop with Deborah, would be reasonable at twice the price.  I know she has one coming up, in Rome.

If you want to see this picture at its full size, just right-click and save to your computer. Often I resize pictures to save some space in the inner resources of this blog, and to allow the pages to come up more quickly for those who may have a slow internet connection. This is true despite the fact that you view (on the page) all horizontal photos at 640 pixels across. From time to time, I leave them as I found them so you the viewers can enjoy them at their finest. Please always respect the rights of the photographer anytime you download a picture that does not belong to you.