Posted on February 27, 2016 by nelsonearthimages

Hopefully you will indulge me while I think out loud. Well, as loud as you can be while typing on the keyboard.

All of the thoughts below, are my opinions based on my personal experiences, observations, and knowledge, gained through one form of education or another.

Those of you who know me, know that whenever I hear identical cries from the masses about any given subject, I believe it generally means that about 10% (maybe) of those cries, come from personal observation and thought. The rest are just mimics repeating what they’ve heard. That herd (pun intended) mentality, is human, but it is foible. It comes from our desire to think like (and be a part of) a group, or as I call it, “group think”.

I am always fascinated when I hear the cries from the anti free enterprise crowd, that big business is horrible, because all they care about is making money. I don’t disagree that a person or a corporation ought to care about things other than making money, but let’s be honest.

Have you ever worked a job for somebody? Maybe for an individual, or a small company or a gigantic corporation. It wasn’t your dream in life but you needed a job. I have. I guess under the expectations that big business shouldn’t put money first, I am pretty doggone evil myself. I did it for the money. I did care about other things, but I took the job for the money. I operated out the concept of greed. I only loved them (those corporations) for their money. I was a gold digger. I would imagine, that any logical thinker, if they were honest, would say that I was worse than big business. After all, I didn’t create jobs for anybody else. Some of the companies that I worked for employed thousands of people. They were still evil I’m told, because deep down inside all they really cared about was the money. Billions of dollars in charitable donations come from American “big business”. I have given money to charities too, but just like big business (remember, their critics just want to be honest), first and foremost in my mind, when I worked, was to make money. That must mean that I too am evil. If only big business had a pure heart and put making money down on their list of priorities. It’s true, they wouldn’t employ as many people, and they wouldn’t be able to financially support all of those charitable institutions, but they would be so much better……if they just weren’t so greedy as to put the ‘almighty dollar” first (sarcasm).

I guess in the end, they used me and I used them. Funny how much alike we really were. When I think about things with an honest ( not prejudicial ) heart, I often find I am just as nasty as those institutions which were by the way, born of democracy, capitalism and freedom.

I know what you’re saying…boy Wayne are you a sucker. Big business has made a patsy of you. I agree that there is a sucker born every minute, but that may be the only thing I am not. Skepticism is my best friend.  It’s just that I actually expect all business to put money first. Of course there are bad people in business. Thank God that there are no bad people anywhere else (sarcasm). Corporations just like governments, welfare recipients, taxpayers, small business, youth educational organizations, police forces, hospitals, anti police groups, and on and on, are filled with individual people, with all of flaws that people come with.

I would never suggest that we abolish the laws that we have concerning ethics in big business. We also have laws for individual behavior and laws made to punish big business for its  indiscretions, should be applied the same way. Find out who did the wrong deed, charge them and if found guilty, make sure they serve their penitence. Slamming a large corporation with a fine, punishes the innocent, but rarely the guilty, and only serves to put more money in the hands of government to waste.

Do you grow as weary as I do, of actors, singers and others in show business, spewing out their politics? More often than not, they’ve been married five times, and are currently married and sleeping with three others. Drugs seem to be a necessary part of the culture and while they are millionaires, most will fritter it away on selfish indulgences at some point in their life. Don’t sing your songs or play pretend on the screen, and live in a world that is anything but real, and then tell me who and what I should stand for. Of every category of person on this planet, they are the least likely I would turn to for an opinion on who I want to lead this country.

By all means, if you want to offer your opinions, write a personal blog, or at least give those opinions when asked in an appropriate venue such as a news program. Otherwise just talk about your frivolous lifestyle, and how many sexual partners you had in the last month.

When I want acting or singing lessons, or lessons on how to make the most money for the least work, I will definitely be knocking at your door. That is the sum total of your value.

The following comments are about a well-known non-denominational ministry that is often not very well thought of by the masses, although that’s mostly because so many judge on personality rather than the truth.  Despite the fact that there is likely no ministry which has among its members, more parishioners that have converted to join them, not only from non-Christian (Islam) religions, but from most of the various Christian and pseudo Christian denominations.

Many years ago Public Television (PBS) set out to do a story on this ministry, and prove that they are not only lacking in a charitable nature, but they have lied about the building of 100 schools in third world nations. Remember an article I published just a short while back called,  in which I stated that most news shows do not search for the truth, but instead, create shows which further their own beliefs, the truth be damned. Well PBS is often a leader in producing and airing that sort of show.

The truth is that the ministry never publicly mentioned the building of any schools. That claim came from another location. Also, the truth is, that the number of schools was actually 142.  Africa, South and Central America, and the Caribbean were among the locations where they were built.  They also paid the teacher’s salaries for undetermined amounts of time. The also included a hot dinner for all of the children. In many cases they dug wells for clean drinking water. On a few occasions in Africa, they brought in semi trailers full of food. PBS had taken somebody’s word for the fact that all they ever did was build one school. As if that would be something to be ashamed of. The ministry contacted the PBS station that produced the story for national broadcast, and told them the truth. They (PBS) checked it out (this time!) and apologized to the ministry and ran a brief maya culpa saying they were wrong. Of course they included very little of the truth in their apology.  When the ministry originally contacted PBS to protest, the one thing they did not tell them is that they built churches next door to most of the schools. They knew if they told them that, PBS would only turn that into a negative. Sure, you help people, but they’ve got to become a Christian! Discriminatory would be the cry of PBS, followed by more cries that the ministry only cares about Christians.

The truth is, that’s what real Christians do. Those people in those third world countries do and will always have free will where those churches are concerned.  They can learn at those schools, and eat that food, and drink that water, but never attend the church if they so choose. They do however begin, with hearing the Gospel.  It’s not like they build the schools, and make the food, and say if you want these things, first say you are a Christian. Actual Christians not only follow Biblical standards of missionary work, they do what Jesus did. Without the Gospel, it is not missionary work. It is fine to join a secular do gooder organization to help people.   It’s always good to help others, Christians just have a bigger obligation than most. Never feel ashamed of sharing the Gospel, and do so not only when it’s convenient and uncontroversial, but when it’s difficult. Anything we do will be minor compared to what Christ did for us.

Some of you would say that I share too many negative thoughts on these pages. I know that it seems easy to find fault with much that goes on in the world. The truth is, if we do not address the world’s cancers, be they physical, moral or intellectual, they will merely fester and kill. Trying to affect positive change by acknowledging our ills, has in fact a positive goal.

There are of course many positive and heartwarming happenings in the world, and just as we need to address our problems, we need to shine the light on those positives. A website called Sunny Skyz specializes in heart warming stories about the good things that people do. I was cruising the web when a story of small children reading to shelter animals caught my attention. Why would they do that?  Visit the website to find out. After visiting the site I found other stories worthy of looking at. Most of the stories they share, are of the quiet sort rather than those that would occupy world news.  Just follow the Sunny Skyz link. 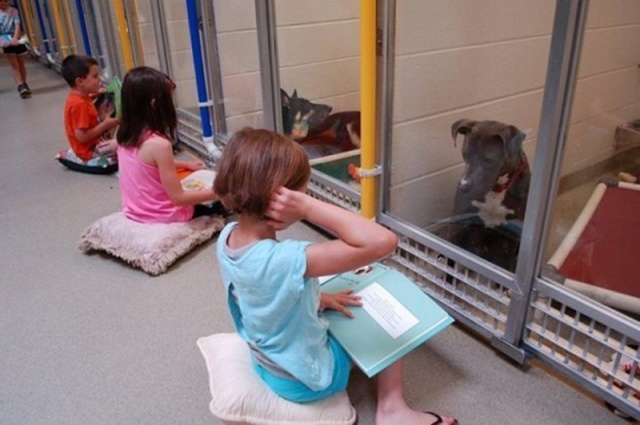