Posted on August 17, 2015 by nelsonearthimages

Both sections of today’s post are really about the different strokes for different folks philosophy.

I have always loved using the tools that most photographers don’t think about in any given set of photographic circumstances. Using lenses in the 200mm-740mm (with extender) for the creation of landscape images, was one such choice.

The visual compression of longer lenses, allows a photographer to create different spatial relationships between objects than we think to be normal. Aerial perspective (with compression) will sandwich dark and light tonal areas instead of stretching them as would be true of a short lens. That creates drama and calls even more attention to say, the size of a mountain. Long lens compression also creates either a continuity, or lack of, in the relationship that colors have within the scene.

Expanding the way you use the hardware involved in photography, will expand the types of images you make, an the way you look (with your eyes) at the subjects in front of you.

I am a strong believer in the creation of small simple scenes. The Rocky Mts. don’t need to be in all of our backgrounds. I love soft even light, even if that light is “heavy” and wet in its mood. A small intimate scene can be opened up with just a twist of the camera. The vertical version allows for negative space, which is used nicely with that soft featureless sky. I used an 18mm lens for both shots.

There are pictures everywhere just waiting to be created.

I enjoy photographing subjects that most photographers would walk right by, or on top of.

I find small patches of moss to be delightful little communities more than worthy of our attention. I of course search out pleasing compositions, but these sorts of shots can be either or both, that of a naturalist or artist. I used my 105 Nikon Micro to make this picture.

In nature or out of it, never disregard whole categories of subjects out of hand. You never know until you try.

Photography at its very best, is an act of discovery and revelation. To me, macro/close-up photography is the consummation between photographer and subject. In the end, it reveals the little details of what all great things are made of.

I apologize for sharing these over-shown images one more time, but they proffer the concept of “knowing a place or subject”, and how you regard the things you love. Places become living breathing entities to me.  They have a personality, and all personalities are complex, and have many different sides to them.

My first trip to Morgan Falls in Wisconsin was made before there were signs and foot bridges to create a feeling of civilizations. I drove through the darkness on the dirt forestry roads which were almost impassable. I had nothing but a national forest map with me. It was love at first sight (site), and we didn’t  part company until she became too well known for my tastes. Over the years, I attempted to show all of her moods. 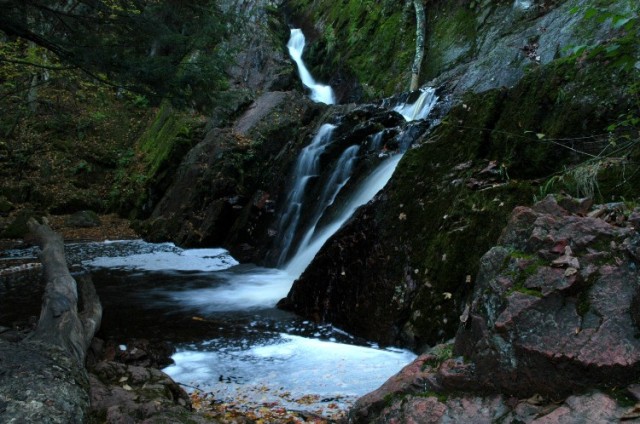 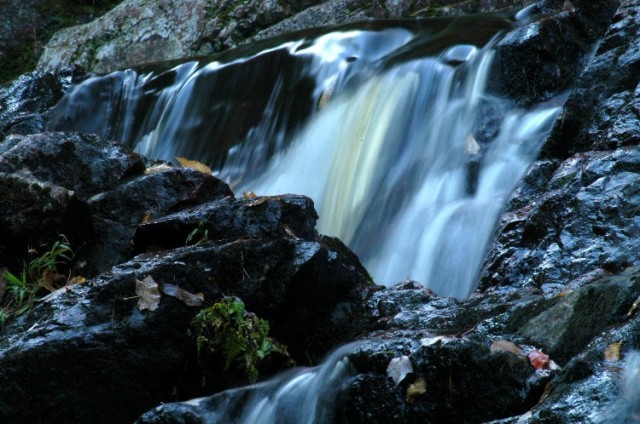 The argument will go on forever as to whether wildlife photography is art or not. I believe (actually I’m sure) that art is in the eye of the beholder and my opinion is that wildlife imagery is as much art as anything else. Even with some of the more artful (some would say) images I have made of wild animals with motion blurs etc., I still give the credit to the animals as being the art, with me being the avenue from which it is shared.

Most photographers would certainly not refer to this image of two little red Foxes as being art, but I take exception to that. These two little guys have given me a pose of natural art, and I have shared it with you. 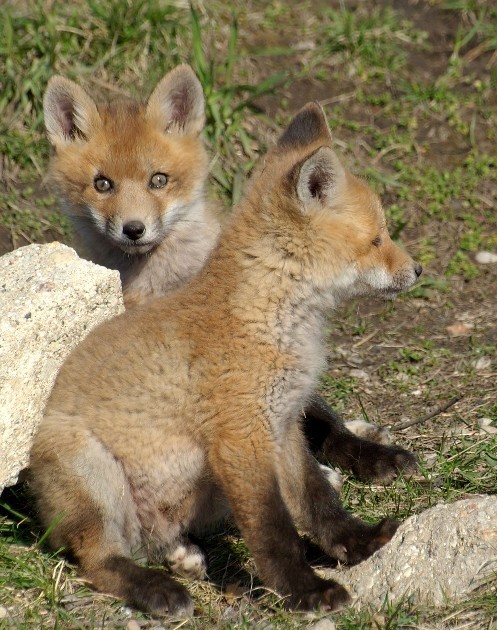 If some (or many) people call your imagery art, and you sell some of your pictures for that purpose, the fact that art is a matter of opinion and the opinion of some (many) people is that your pictures are art, should make you feel better than believing that only certain learned people know art, but the uneducated woman down the street who bought your print, really knows nothing.

I have been accused of overanalyzing some things, but under analyzing can be even more dangerous.

I always loved the job of photography and did that job with pure joy, and a fair amount of success. I made my pictures with little regard for whether they were considered art, natural history, and anything else.

Some of my writings from the past could leave one to believe that I am anti-science. Nothing could be farther from the truth. The science of medicine has given an innumerable amount of people longer, and often better lives. Computer science is something I have been embracing, albeit sometimes with complaints, for many years. Every time we get a space probe closer to another planet, I both marvel and celebrate. Then we get to evolution. Human evolution and ‘the big bang theory” go hand in hand. They both theorize about how things change. They both tell us how some things become something else. They are both “still theories” after all these years, and they are both taught in our schools as if they were the gospel..….so to speak.

I believe in evolution. Let me back track. Clearly over varied periods of time, things change. Those little white lizards who are decked out in life saving camouflage in White Sands, New Mexico, have changed (in that one place) from greenish/brown to white in a few hundred years. European settlers have watched it happen. Human beings, are getting larger every year. Taller because we are evolving in response to easier lives and better nutrition than earlier times. Fatter because….well food is much easier to get.

There is no provable knowledge of any moment in time when one thing began to evolve into something completely different.

For years the chasers of the missing link have in their zest to prove that humans evolved first from gorillas, but initially from a water born ameba, have falsely reported, both accidentally and intentionally, to have discovered that link. Those gorilla like creatures in Africa, that were supposed to be the missing link, because they were unearthed on lower ground than human remains, eventually proved…….I said proved, something that evolutionists actually disdain, that they were in fact….just gorillas. The exact same skeletons were also found above man, and had died many generations after the human remains. That one bone found in Nebraska that was said to be the definitive proof of the link between apes and man, was finally proven, by the science of DNA, to be a domestic pig.

Evolution theorists, I’ll repeat, theorists, have long stated that the Darwin’s Finch in the Galapagos Islands, is positive proof of evolution because within a time frame that human beings could observe, it developed a new beak, better suited for a new food source. It developed a new beak, it did not change into an alligator, or a wolf. For that matter it did not evolve into an eagle, or a jay, or a sparrow, for that matter, not even into a different sort of finch. How poorly endowed in your convictions do you have to be to use this as an excuse for human evolution.

There is a TV show called The Big Bang Theory. It’s about a fictitious group of nerdy scientists and all the trials and tribulations of their lives. They poke fun at everything from Christianity to science. In one episode a friend of one theoretical physicist asks, what’s new at work? He replies sheepishly……..“errr……..ummmm……..hmmmm., well nothing. Nothing has really happened in physics since 1930 when string theory was discovered……and of course, nobody can actually prove that.”

The problem with science is, they can not describe nothing. I mean there is no real place in the big bang theory, from which the whole universe was supposed to have evolved, from nothing, or better said zero. The same is true for the theory of human evolution. Concerning the big bang theory, before that matter exploded to create the universe, what was already there to fuel the matter that resulted. They have a theory for that, which is of course taught as truth. Where did that come from? Some physicists have a theory of smaller particles and before that gasses.. What about before that? Ummm, errrr, ahhh. There of course is no answer. Physical science, by the definition applied by scientists, needs everything in existence to have come into being from something else already in existence.  There are no actual beginnings.

A few years ago, I watched a program that showed a Christian at the science department of a large university interviewing both students and professors. He was asking questions about the big bang theory and human evolution. Ultimately of course, he reached a point where each and every person, had no answers. Still, they teach the theory, as gospel…..once again, so to speak.

The most obvious observation to be made from watching the professors was, they are an often angry, and very, very sad bunch. It is almost amazing what a sad, angry group that atheistic scientists are. They are also quite often, rude! I really just want to reach out and make them happy. Suicide rates among admitted atheists are higher than the general population.

The students of that department are certainly traveling down the road to bone chilling sadness as well. They are however, still young. There are still small glimmers of light in their eyes. As try as they might to fight it, occasionally a very small smile breaks out. There could still be time, if they only realized that they are theorizing, not exploring a known truth.

The final student that was questioned was the only person that admitted, he was troubled by the fact that everything he is being taught as truth, eventually comes to an end with no answer. There was no answer for zero. With a faint smile on his face, he stated that the only answer to the very beginning that he could understand, was creation.

One thing that the bitter, sad world of atheistic science always likes to accuse God believing people of, is operating out of faith. They are correct. While it takes enormous faith to believe what they teach, in fact atheistic science is based on faith right down to its core, so is Christianity. In fact, faith is the center of all Christianity. Any true Christian will celebrate and gladly admit to their faith. Christians are filled with joy because of their faith, while atheists are angry and sad because of theirs.

Our schools which are taught primarily by atheists, are creating monsters. Look in the dead eyes of so many young people today. They kill and have no emotion that follows the deed. After all, we’re just another animal. What’s the big deal. If you believe (and understand) the Bible and the Christian belief system, you will realize that we have a higher calling and we were created, because we were wanted and loved. Love too is often a forgotten ingredient in the mindset of the atheist.