Posted on April 16, 2015 by nelsonearthimages

I just wanted to share with you, six photographers who are making great images. No matter their age or their photographic style, they are relevant today and that makes them a part of the new school of photographers that are wowing us.

I enjoy Brian Rueb’s photography so much. He makes dramatic images of great locations, but he does not go “over the top”. You are still looking at a real world view of a real world subject. In this case the subject is the coast of California and the Pacific Ocean.

Michael Frye is another favorite photographer of mine. He created the image below of a spring Dogwood in the Yosemite Valley of the park by the same name. My personal experiences in making such images all took place in Smoky Mt. N. P., Tennessee. These gentle sorts of pictures are a time-honored tradition in landscape photography, and let’s hope that never changes. 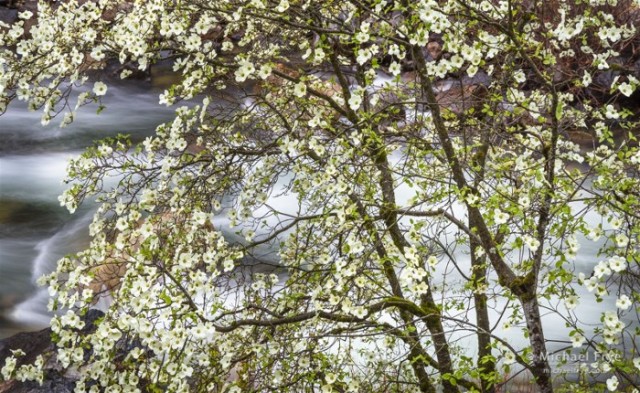 The Gannet is one of the most sought after birds by bird photographers. They are living art and they photograph beautifully. This photo was made by Steve Race and it shows a bird busy with nest-building. There is nothing like making wildlife photos that show natural history but are art as well. Remember my philosophy, wild critters are the artists and we are the producer’s of their art.

Another bird that is art in and of itself, is the American Avocet. There is nothing they do that isn’t artful and that includes the act of flying. Dan Walters is the photographer.

Is this a horse or a ham? Laurie Rubin caught this equine subject as it tried to decide whether or not to approve the equipment in use during a workshop. Laurie always captures great moments. 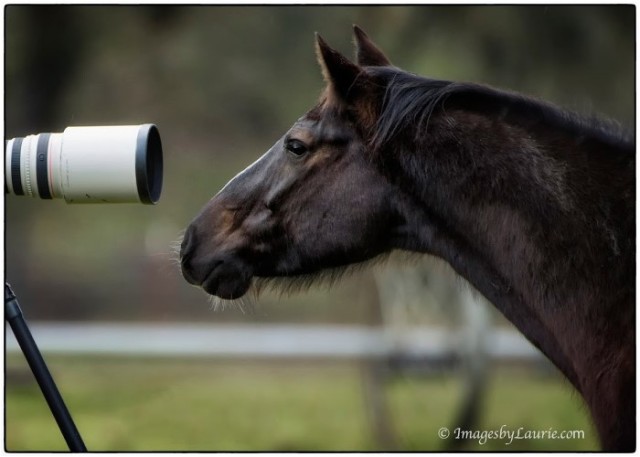 The one thing I have not yet shown on the pages of Earth Images, is an example of commercial photography. I have some of this in my background, and there is something to be said for receiving an assignment, and then going about solving all of the problems that will be encountered, and coming back with a great finished product. The mindset of building an image from the ground up, instead of interpreting an existing subject, is quite different. There is a sense of satisfaction when a difficult commercial job is complete, although my personal knowledge of working for companies of the magnitude of Mercedes Benz, is zero. The subject here is obviously Mercedes Benz, and the image was created by Eirik Aadde.

My journey through life has often been traveled backwards, in respect to what I see from others. Most people find something that interests them, then slowly over the years, they learn more about the subject. They expand not only what they know, but what they do. They try more and more things that involve that subject, as time goes on.

When I was a little kid, my friends and I played a lot of baseball during the summer months. The only thing I liked more than baseball, was exploring nature and old buildings. I was like any other kid playing a game except I had to try every position on the field, and do so right away. Others stuck to one position, and gradually played some of the other positions. Our family went to see a Milwaukee Braves Major League baseball game. Inside of three months, I probably could have gotten a job as a baseball historian. Other kids who traveled this path, slowly learned about the history of baseball.

In the early 1970s I began my journey in photography. I bought a camera and within a couple of months I had my own darkroom. I did my first professional job, a wedding, shortly there after. The 1970s was a time of photographic experimentation for me. I photographed nature, buildings, nuts and bolts, people, pets, rocks, gravel, fish, car racing, other sports, and on and on. Some were paying jobs and some were for my own satisfaction and education. I tried multiple exposures, culminating with a 24 exposure image of a bed of flowers, while making slight compositional adjustments between each and every exposure. I photographed star trails (later the Northern Lights). I made low light images and painted foreground objects with a flashlight at first, and then I used a flash. I learned to calculate the inverse square law for fill flash and total flash. I made long interior exposures in which I would walk through the picture frame during the exposure. Of course my time in front of the camera was such a small portion of the overall exposure, that I disappeared. I had not read about that in a magazine. There were no examples of these things to be seen. There was no Facebook. I simply used my own small intellect, and went out and tried it. I taught myself how reciprocity failure worked with film. As an exposure gets longer, the emulsion layers of the film begin to delay, and then stop the light from penetrating.

I did these things and more, only because I was driven to learn more, and to try more. I bring this up because I see an incredible appetite by photographers today to learn more, in the “normal” method of hearing about something new, and then trying it out eventually in the field. They do what they do until something new pops up. That’s normal.

As my years in photography wore on, while I always left myself open to any subject, the natural world and historic architecture became my mainstay. After all of those years of experimentation, I found myself more concerned with the reverence I showed for my subjects. I wanted to honor them, with my own personal statement, but in the most natural way possible. As natural as is possible with a camera in hand. My abstracts became straight forward images that were abstracted by my lens selection, camera position and use of light. As usual, I was making my journey backwards.

Of course I detoured in my first years of digital photography. I added a full moon to a picture I made in a zoo of a Red Wolf howling. I digitally placed an over sized Bull Frog on top of a sand dune. I had to learn. Eventually my fascination with such things left me. I peaked too early. There are many valuable tools in digital photography that I have not tried. Digital stitching for the creation of panoramas is a good example. There is a danger in wanting to do everything right away. The slow methodical approach of I’ll learn something new later, when the time is right, has its benefits.

One of the best things about photography, is the wealth of subjects that are available to each of us. Another is that, if we so decide, the simplest most innocuous subject, resting next to our foot on a morning walk, is as important as the Grand Canyon or a growling Grizzly Bear. We just need to look down and share with the world what we see.

What have you seen today?