Keep Your Finger on The Trigger

Posted on July 31, 2013 by nelsonearthimages

Today’s  Snowy Owl and Dunlin photos have never been shown before.

I always believed that when you are out making pictures, you should make pictures.  In other words don’t be shy about making a lot of pictures of any given subject.  I am not talking about the machine gun approach.  As much as possible, my philosophy dictates thinking about every frame.  I say as much as possible, because there are those wildlife moments when you have to “keep your finger on the trigger” in order to capture great action sequences.

I have written a lot recently about photographic art.  You’re probably growing as weary of that subject as I am, so today is more about using pictures alone or in groups, to tell the story you want to tell.

I have been known to make 100 pictures of a bird on a single perch.  I know there are some photographers who would make 1,000.  I just want to cover all of the subtle changes of position, and all of the different expressions.  I want a big selection so I have a lot of options when I share pictures.  As subjects go, birds can be a lot like people.  Little changes sometimes make for big differences in the mood of an image.

This Snowy Owl of a few years ago was one of my all time favorite bird subjects.  He was not only doing big things allowing us photographers to make pictures of great variety, including action, but he was always making slight changes in expressions and attitudes.  He was constantly giving us those subtle differences that make creating yet another image well worth it.

The differences in the poses below are slight but still worth the click of a shutter.  They are however close enough in the information they give, that any group of pictures of this bird, should only include one of these two photos.  Decisions, decisions.

Sometimes when I look at old pictures of birds like this Snowy, I get nostalgic.  I wonder how he is doing today.  Among other things, this Snowy served to rekindle for me a human friendship that was fading.

Just a few thoughts about making powerful bird images.  I am a proponent of showing habitat in bird shots, even if they make the image a little cluttered.  You will see habitat shots below with the Dunlins.  You will find more habitat in the fairly “busy” Grouse pictures.  Having said all of that you will still sell more bird pictures (art and stock) with the clean, simple, elegant style images you see above.  If someone loves Snowy Owls, images like the ones above leave no doubt as to what they are about.

I think pictures of birds preening, are artful and at times informative.  The picture of a Rough-legged Hawk below might be okay for a stand alone image of a bird preening, but if it is designed to introduce people to RLHs, it needs to be shown with other more illustrative pictures.

The first two images below were made  consecutively.  The first image of a Dunlin searching for food could work if it is shown with other Dunlin photos where we can see the bird’s eyes. The next image is a more complete look at this species.  The bird has eyes.  Well an eye anyway. That first image could work well in tandem with the final photo in this series.

This first Robin picture could be used in a an effort to show birds that use manmade structures for nesting sites, or a bird feeding its baby, but if you’re trying to show somebody what an American Robin looks like, you want at least one straight up shot of that species. 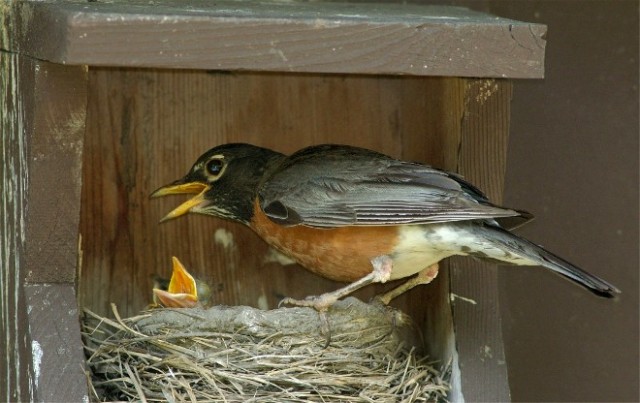 Making a lot of pictures is the one way to make sure that you show both behavior/action, and also show all of the markings of a species of bird. I had my finger on the trigger quite a bit when I spent the morning with these dancing Sharp-tailed Grouse.  I still did my best to think about every picture that I took.

I guess it seems like sometimes I say shoot, shoot, shoot, and other times I suggest a slower more methodical approach.  I always believe that if you are in doubt, make the picture. I also believe that you should think through every image to the degree that time allows.  Obviously wildlife photography is a little different from say landscape photography or flowers.

Whether you keep your finger on the trigger or not, you have to at least pull the trigger to make an image.  That requires (for an outdoor photographer) getting outdoors with your cameras. Time is always shorter than you think, go out and make a picture (or 300)  today.

A wise person once said …There comes a time in life, when you walk away from all the drama and people who create it.

You surround yourself with people who make you laugh, forget the bad, and focus on the good.

So love the people who treat you right, pray for the ones who don’t.

Life is too short to be anything but happy.

Falling down is a part of life, getting back up is living, moving on is the journey.