For a change, today I decided to limit my post to all photography. Three genres of nature photography, flowers, landscapes and water birds. I placed a limit to five images in each of those three categories.

Every category of subject, and every specific subject in photography, has things in common with others, and things that differentiates them from others.

Flowers, are certainly a popular subject for photographers, although I have known some nature photographers, both men and women, who considered them to be too trite and too tame. Those photographers were often “wildlife first” image makers, but I have spoken to landscape photographers who would not point their camera at a flower unless it was a part of a “greater landscape”.  I always struggle with those sorts of attitudes although I of course stand by their right to do (or not do) so.

When I think of flowers, my first thoughts go to super close-ups or “true macros”. The shapes, lines and colors of a flower make for outstanding subjects in and of themselves, without concerning oneself what the species might be.

I do know this, I am intrigued by the shapes and contrasts within the scene, and I consider most photos, even those of a single flower, to be scenes.

Now this is a Lily. While Lilies, are cool flowers from a distance, my aim here was to “break this blossom down”, into its most interesting parts.

Both of these first two images were photographed with my trusty Nikon 105 Micro lens, and of course, a sturdy tripod.

When you begin to move back from blossoms, then the background (and side ground) begin to become a part of the image.

My goal here was to separate the flower from its background of green grasses and out of focus flowers of the same sort, while rendering this main flower sharp.

There is a hitchhiker on the left side of the blossom and yes, if memory serves, I was aware of its existence and considered it an “interesting  part of the flower” so to speak.

I shot straight down on these dew covered Bluets. The background beneath the flowers was I shade and I of course exposed for the flowers. I also added a bit of contrast to the image in the editing process which further separated the flowers from the background.

This is actually a contrasty scene which also has some shadows falling over some of the blossoms.

Contrast, can be your friend if you use it to your advantage, and harness it to add drama to your image. Too many photographers run away from the beauty of contrast.

I could have picked a more spectacular image of a more spectacular location o illustrate to you, that fields of flowers are subjects in and of themselves. Even without mountains or other such things to provide an anchor for the photo.

This image is that of common roadside Bergamots. I have made such images over much of America.

This picture seems simple, and so it should. Careful consideration of my composition was taken. What to leave in, what to leave out, is our (your) decision. It is what makes an image “yours”!!

None of those thousands of images such as this that I have made, will ever be among my best known, or even among those that people remember. I however never forget them, because of the time and care I took in deciding, what to leave in, and what to leave out. 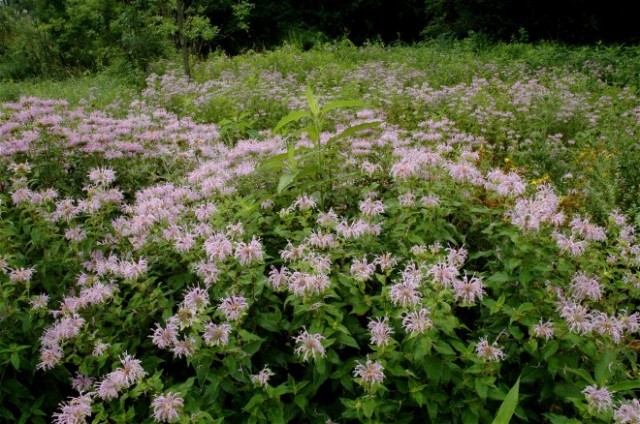 Landscapes, can be made at the world’s most famous locations, or down the street from your house. It is irrelevant in so far as the effort or art you put into the finished image.

Today, we will examine some pretty well-known landscape destinations.

Whites Sands New Mexico is very popular with many photographers, but not as high on the list such locations as Yosemite N.P., California, The Maroon Bells, Colorado, Mount Rainier, Washington, or The Grand Tetons, Wyoming.

The fact is, White Sands is “almost” exclusively, a location for abstracts. Even the most conventional scenes like my first one below, which shows a native Agave plant, is somewhat abstract in its point of view.

The more you begin to leave behind the literal, such as a green plant, and reduce the subject to side lit sand dunes, and rolling hills, the more you forget about the subject and think about the rhythms and flows within the picture frame.

Of course, those of you who have viewed other images of mine from this outstanding location, know that they can become completely abstract if you just let that happen. 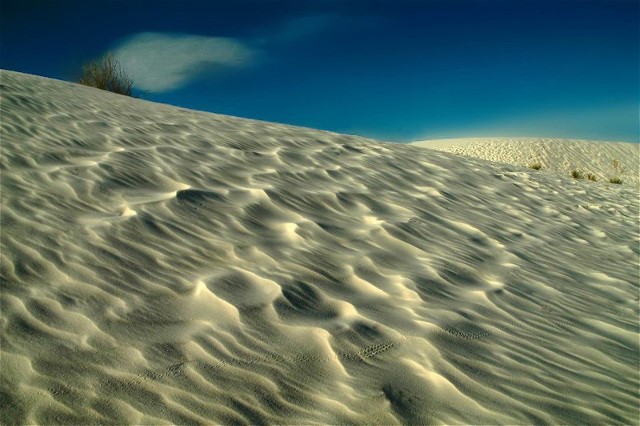 In the Upper Midwest of the Great Lakes States, Bond Falls, Michigan is a popular place to create landscape imagery. Waterfalls, can of course become total abstracts in and of themselves, but what about putting the falls in the context of its environment?

A steep drop for the falls, some autumn hills, and we have a view that tells us about the place, but does so without looking like every other view that has been presented from here.

Understanding where you are, and conveying that through photographs, is the primary job for a photographer.

This image below began on film if memory serves. 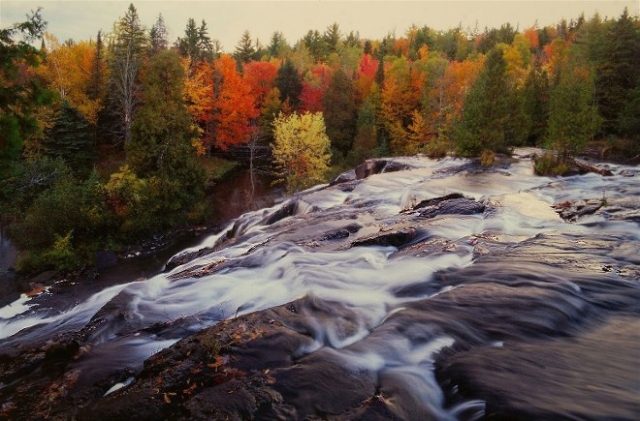 The Badlands of South Dakota, are somewhere in the middle range of locations as far as landscape popularity is concerned for photographers. In many respects, it is my favorite location. Partly because the rock forms vary in shape, texture, and color so much, and partly because I have been there many times in my life and have had the privilege of photographing her under a variety of light and conditions.

Sunshine and clouds can produce great results in a place like The Badlands. The shadow and the warm rock against cool blue sky, along with texture you can almost feel, show why the Badlands are a great place. 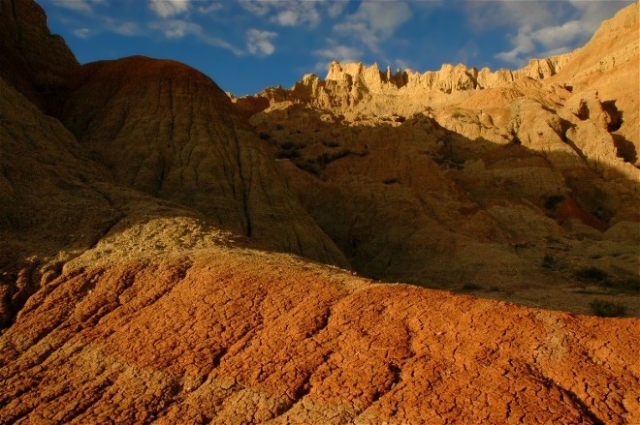 Approaching storms and “high bright” overcast joined together to create some nice contrasts, and color saturation on this group or rocks. We have here a distinct foreground, rock forms, and sky, which take us on an adventure in the Badlands.

When it comes to photographing waterfowl, a unique one such as this Black Skimmer Gull, exhibiting action and behavior, always makes for a happy capture.

This shorebird gave me an opportunity for a “bottom’s up” photo and I took it.

Eating behavior, such as this female Greater Scaup is displaying, is always a treasure. 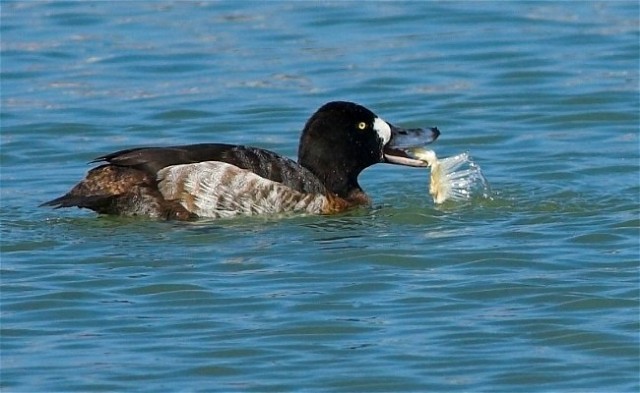 Entire families (the other adult is behind and out of the picture), are always a catch.  These are Trumpeter Swans.

Never be afraid of making images of common animals.

Whenever I snapped the shutter on critters as common as a Canada Goose, I always attempted to go a little above the normal so those who do not enjoy viewing (or buying) images of common critters, would find something special about the photo.

In the case below, I dropped my tripod down to a very low level to create an eye level view of my subject.

Every image can be special, if you look at the subject in a special sort of way. 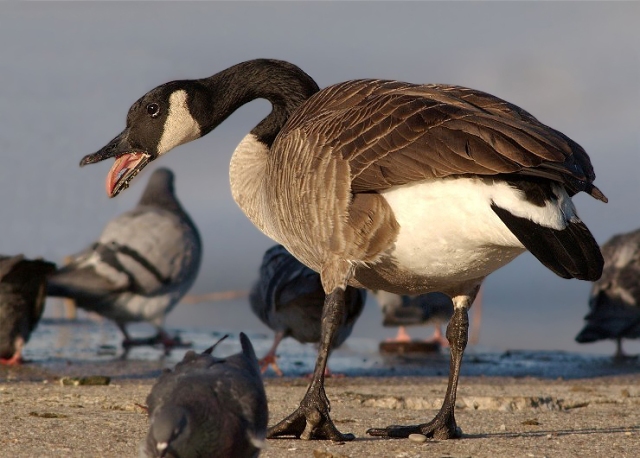 All of the bird images above were made with my Nikon 500 f4 lens,  The shorebird, the Scaup, and the Swans were photographed out of the window of my car, the gull and the goose images were made out in the open with a tripod.

Have a great day and God Bless,
Wayne