As Good as It Gets

Posted on March 21, 2020 by nelsonearthimages

I mentioned in a recent post, how when I mix images from other
photographers with my own (old) pictures on this blog, I usually
include the disclaimer that my photos are rather humble in comparison.
Obviously, when I share images from others, they are chosen because of
their quality. They are also generally current work done with current
cameras and edited with current software. I also confessed that on
occasions, my modesty is false. Not on my last post, and certainly not
this time. Today’s guest images are spectacular. They are as good as it gets.

Dr. Phil Wheat is a frequent contributor to my Flickr group called
Earth Images. I am glad for that. His work, especially his wildlife,
is brilliant. They impart information, and show what the critter looks
like, with clarity and above all with a great amount of art.

This first image is that of a Reddish Egret in breeding plumage. It is
in the act of preening while in some glass smooth water. Wow!!!

His second shot today shows us a Brown Pelican bursting into flight.
Once again wow!!!

Facebook friend Mike Moats continues to be one of macro photography’s
most accomplished artists. He is consider by many, to be the best
teacher of such as well.

His image below makes me pine for autumn.

Now for the rest.

I have decided to use my images mainly to examine a few aspects of
nature photography, and in some cases to just give us a smile.

Telephoto images of a light source can be powerful, but problematic
depending on your mission in creating them.

The sun and the moon are the two most popular subjects for those
previously mentioned telephoto images, be it that one (the sun) is a
mass of gasses and a light source in and of itself, and the moon is a
solid object that is reflecting light from that very same sun.

The elliptical bending of the sun’s light, especially when near the
horizon, makes for non literal but artistic interpretations.

With the image below, the sun looks like a football which is loosing
its air. Sort of haunting.

The moon often shows a corona (not Coronavirus) when light fog or
other “heavy” atmosphere is present. On crisp black nights like we
have below, the ring is absent and the moon and its craters are
evident.

I of course need to thank the sun for the opportunity to make both images.

I have shared this next image previously within the past year. I come
back to this very, very old film image often because the conditions
that morning were spectacular. The was sun was ‘burning a hole” in the
atmosphere. If memory serves I used at a two stop (maybe two of them
stacked) graduated neutral density filter to hold down the light in
the sky and therefore balance those clouds and their reflection
somewhat. 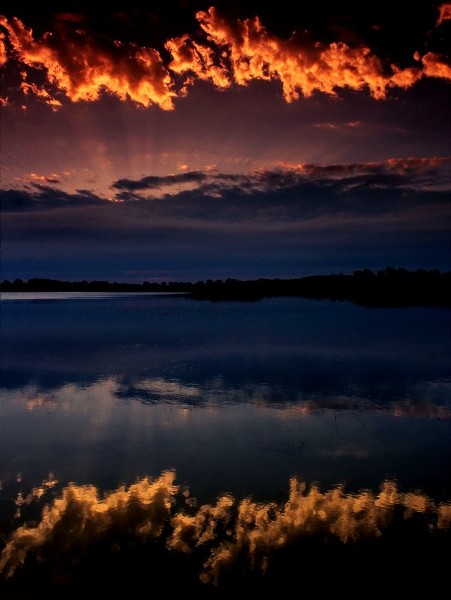 One of the most effective ways to silhouette strong visual shapes is
to pose them directly in front of the rising or setting sun. The color
and exposure will vary somewhat within the photo as you move away from
the sun and I personally think that adds visual stimulation to the
scene.

My years of making, developing and printing black & white images have
served me well in my understanding of tones verses color.  The ability
to alter color into black and white at home is one way to work on
values of color verses tone, while sitting comfortably in your own
dwelling.

These first two images were made in the Badlands of South Dakota.  I
think their powers are about even in both the original color version
and the black and white alteration. The original is not a high color
image itself. If I need to choose, I prefer the color version because
the green grass, and especially that lone yellow flower, contrast with
an otherwise low color image. It seems a shame to miss that color
contrast as you would in the monotone picture.

I’ve shown this colorful Utah mountain valley before. This was made at
sunset.  I do think the black & white version has some merit, but I’ll
keep the color shot just the same.

This next image is a strange case for me in so far as color verses
black & white are concerned. I made this picture in Monument Valley
Utah/Arizona, and while this is not one of MV’s most iconic rock
forms, I found the contrasts (there I go again) between cool blue sky
and warm rock, as well as the contrast between rough textured rock and
soft fluffy clouds to be outstanding. With all that said, I actually
find the black & white more powerful. Removing the color and reducing
the photo to texture and tone, adds to the drama for me.  Also those
brilliant clouds appear to be ominous instead of “just” beautiful.

This scruffy, not quite all encompassing image of a Reddish Egret does
not belong in the same universe as Dr. Wheat’s. It and a couple more
are all I’ve ever made of this species.Okay, this image is of the poorest technical quality on this page.

I have never shared it before due to those reasons and it probably
shouldn’t be my closing shot on this page.

I have shared some pretty cool fox pictures on these pages over the
years, but sometimes we need to shed our egos and give people
something interesting or endearing to look at regardless of quality.

This is an adult male fox and he appears to be waiting for a picnic.
He and I both hope you all have a great day.