Posted on November 17, 2019 by nelsonearthimages

Some day, I may actually run out of phrases I can use for
analogies to photography.  Slice of life is one of a thousand that
constantly flood my strange but fertile brain.

Still photography to me, has always been a “slice of life”. Most
exposures last between one second and 1/5000th sec. My longest
exposure has been about ten minutes. In the grand scheme of things,
that is a mere slice if life.

While people photos are the most obvious slice of life as we
know it, to me all photography is one slice or another.

Is the slice or brief moment in a wild animals life not still a slice
of life?  The sun as we constantly revolve around it, becomes a series
of split second moments.  Even an old building with its stories to
tell, is a capsule of memories taken from life.

That sun of which I spoke, gives photographers more slices to work
with than most other subjects. The sun is light, and without it there
is no photography.

One shaft (slice?) of light creasing the edge of a canyon pinnacle is
to me, magic.

The magic of the surf at sunrise helps tell the story of the
daily routine of a great lake……pun intended. The first photo is an
exposure of 1/200th of a single second and the second 1/80th sec.
Small but beautiful slices of life. 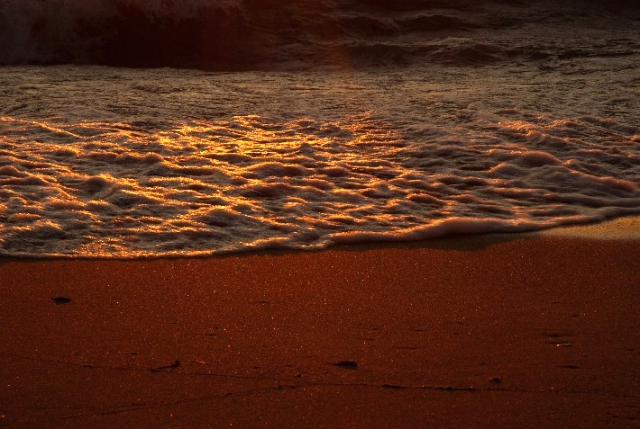 Shafts of sunlight piercing through a coniferous forest don’t last
forever, but while they exist, they are a slice of magic.

Even the duller spectacle of “high bright” indirect light on a
mountain and a lake, or backlight on a cactus desert of the southwest
create their own sort of brief magic.

All forms of light are fleeting and reveal the land in different ways.
That includes minimal detail and full silhouette.

Is this an image of a swan, or of light?  Both. It is surely a picture
of a graceful swan foraging for underwater plants, but notice how the
dappled sunlight accents the birds body.

Peek-a-boo. This baby swallow was there, and then it was gone. I don’t
know how long Barn Swallows live but this was surely a slice of this one’s
life.

Animals in action are brief (1/1000th sec with this one) in their nature. This tern
played its own form of peek-a-boo with its face.

Needing to consume food to survive, is a matter of life and death for
the animal world. One animal dies, and the other, a Turkey Vulture,
survives.  The cycle of life is merely one slice of life, but it is
the most important story to be told.

Capturing multiple species on one picture frame doesn’t necessarily
require one of them to be deceased.

The Cowbird on the back of this Whitetail Deer, is searching for ticks
and other “little critters”.  When he finds some, he gets fed and the
deer is at the very least saved from a bothersome misery, at the best
she is rescued from sickness or death. It is a fruitful and
symbiotic relationship. It is also a story that photographers can
tell.  A story of life.  A slice of life.

Man’s story is no less compelling.

We do not always need humans in a photo to tell portions of the human
story. The San Xavier Mission in Arizona was made by humans. It was
built in the 1700s by Spanish/Catholic explorers on what is today, the
San Xavier Indian Reservation.

The story here is compelling and you can feel the life that once
existed here. It differs from the current life and through our images,
we can tell stories like this. At least, a slice of the story. This
image was made in the 1980s on film.

When I created this image on high contrast (most positive films were
contrasty) transparency film, I knew I could not hold detail (it would
have been burned out) on that steeple inside the doorway, without
making a complete silhouette out of the wall you see in front of you.
I used an off camera (likely 4 feet or so) electronic flash unit to
add some pop and texture to it, and therefore created a more pleasing,
viewable image. 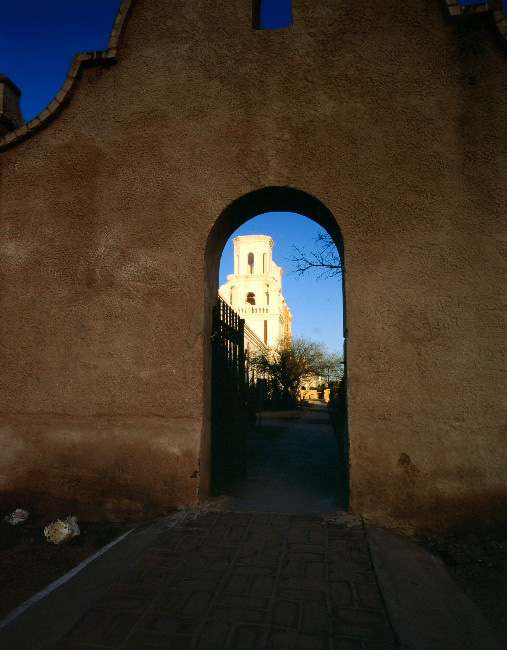 Photography can be many things to many different people. It is a story
telling medium. We can never tell the whole story, but surely we can
tell at least a part of it. A slice of it. It is up to (my opinion)
the photographer to decide whether they merely want to mechanically
record those bits and pieces, or they want to be an active participant
in sharing the story.  Doing so in a brief click of the shutter.

I do not know how many times over the years that I have come within a
razor’s edge of thickness to quitting this blog.  At the very least
stopping the photography portion of my writings and moving on fully to
the other subjects which I write about now only occasionally. At times
it seems silly to me for an ex-photographer to keep sharing photos,
mine and others, and telling you what they mean to me. It’s that
fraction of time that is captured forever via the clock of the shutter
that keeps me going. I have been forever captivated by it, and it
seems I always will be.

“For the present is the point which time touches eternity”  C.S. Lewis

I would like to wish those citizens of Hong Kong and Iran who are fighting for freedom, God’s Blessings.

After Hitler’s Germany and the Soviet Union, one might think that totalitarian regimes which put government over people would cease to exist.  One might certainly believe that those in free nations would not want to follow that path, but current times in America and much of Europe seem to say it is a lesson that is never learned. The battle goes on.

1 Response to Slice of Life