Changing The Landscape & Other Stuff

Posted on June 17, 2016 by nelsonearthimages

The landscape seems like a fixed entity, but the possibilities are as vast as our personal vision and imagination.

In the beginning (that phrase is for dramatic effect), landscape photography to me always meant looking at the big picture, and working your way down to the detail. It mattered little where I was. As the years wore on, I began to spot details and then “spread them” out into the big picture. If there’s anywhere that provides both big picture and small picture drama, it is the sand dunes parks of the American West.

Both Great Sand Dunes Colorado, and White Sands New Mexico in my initial visits, were first big and only after that, small locations. When I returned to White Sands I saw everything backwards from my first visit. I saw light and shadows, then patterns and rhythms. I started out with abstractions of sand and light, and closed with the big picture. 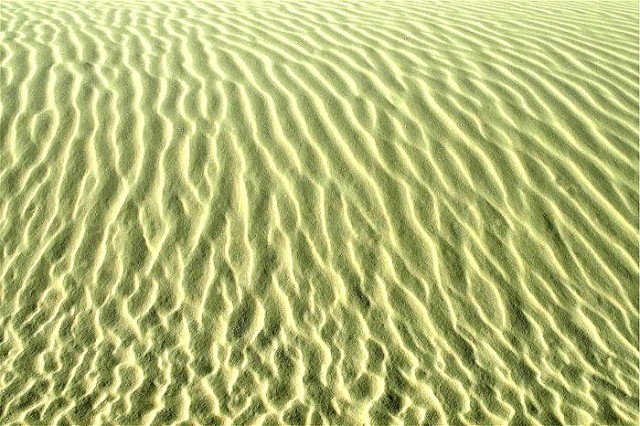 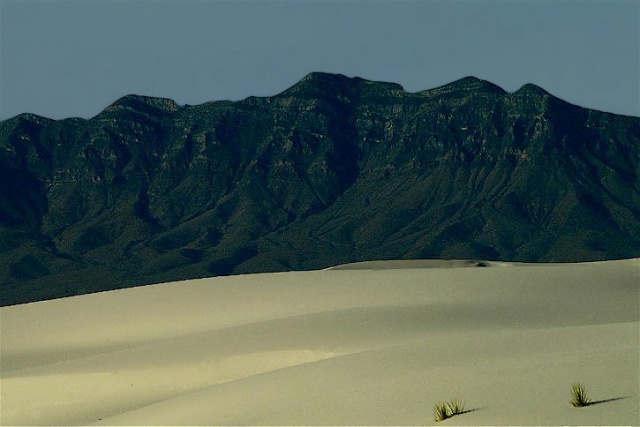 For some reason, Great Sand Dunes is always a big picture first destination for me. Of course, there are fewer ripples and designs here. After making some grand landscapes, I began to see some semi-macro type designs. The second photo below is actually not a close up. Those are fairly high dunes and they are compressed with a 300m lens.

What do you see first and last? The only wrong way (my opinion) is to not see all of the possibilities. We have wide-angle lenses, and macros and telephotos, so we can exercise our vision, both with our eyes, and with our minds and hearts.

I love making images of human history. Below you see a very simple scene of the interior of a 19th Century farmhouse, backlit from a window. The original image was a 35mm slide. This picture was made handheld (no tripods allowed), well before Image Stabilization or Vibration Reduction came into being. The film was probably 50 ISO. That’s a dicey situation and for me, the answer was to compose, focus and shoot quickly. For you, the answer might be to go very slowwwwwly, and click at the right moment. 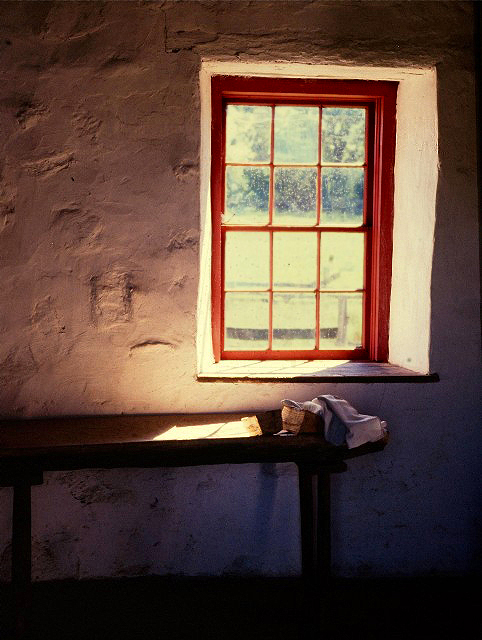 Wildlife photography has been an important part of my life. For many wildlife photographers it is about that stop action flight or running shot. For me, it was often about either unusual circumstances, or an unusual pose.

Wild animals just like people, give you a different image, every time they turn their head, or change their expression. As their body language changes, so does  the mood of your picture. 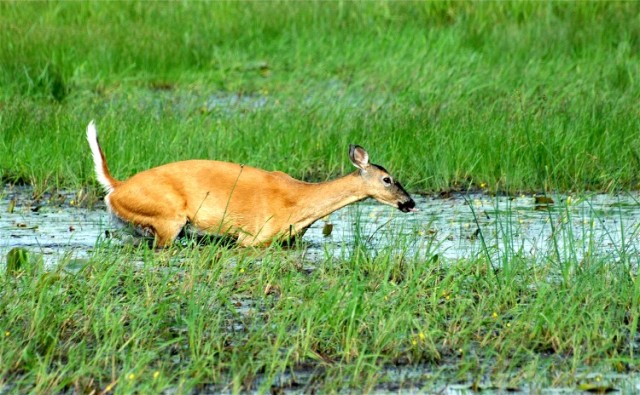 I don’t believe I’ve ever shown these particular images before, although I have shown this bird posed in a different tree before.

As you can see, my Bald Eagle friend had just landed with a fish he/she had caught. Up until this catch, any fish appropriated from the river below this perch, had gone to the babies. It was time for mom or dad to eat. 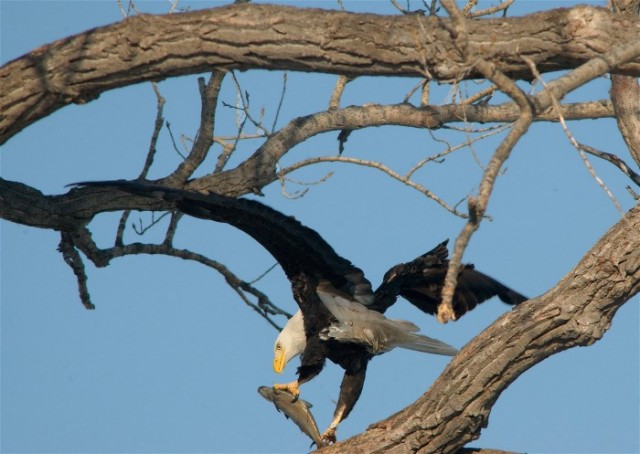 The tree above that it chose to land in, was the busiest tree on the river bank. Branches here and branches there, but I love natural history so I made sure to click, click, click. The bird eventually moved to a much cleaner limb but it was also farther away. It’s not always possible to get award winners but “little winners” can still provide us with great memories. 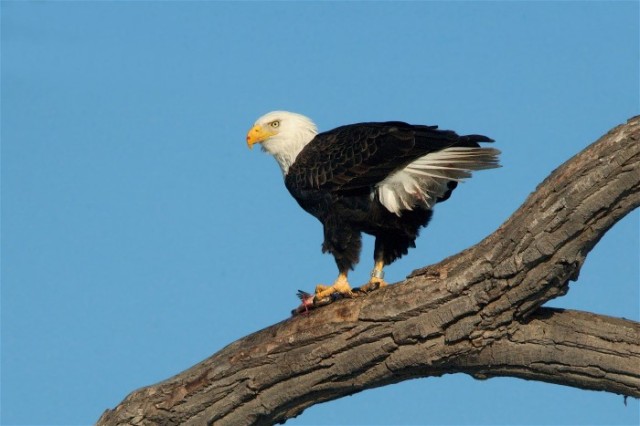 Canada Geese are pretty ordinary birds and are found in a good part of the world. About four times over the years I have found a Canada Goose on top of a nest. This is the only time I found one in the prone position that you see here. There will be no rewards or applause for a picture like this, but there is satisfaction.

There is more to consider than applause.

I don’t think I’ve ever met a leafless tree I didn’t like. Especially Oak trees and extra especially, Oak trees at sunrise or sunset.

I’d long forgotten about this fairly ordinary semi-abstract when I happened on it one day during a search of one of my external hard drives. The more I looked at it, the more I liked the contrast between the fleeting pink clouds and the strong but twisted shapes of the craggy oak. Most of the pictures I made in my life, were made for a reason. The good, the bad and the ugly all said something I wanted to say at the time. My accidentally stumbling across this one reminded me how my mind worked when I was in the field. How I thought about things, and how I “saw” things.

Those of you who have been with me a while know that I love finding dewy spider webs with dark areas in back of them. I’ve also stated many times that this is one of the hardest photographic feats to accomplish. Not only is it extremely difficult to get your camera, tripod, and your own body into position without breaking a strand or at least knocking off the dew, there is this thing we call the wind. One tiny breath of wind, even from your mouth, will end your project.

The two images below were made two years apart, but the first shot, was a study in patience. The wind was very slight but it was just enough, to try my patience to its fullest. Patience usually pays off in photography I got the shot.

After spending fifteen minutes waiting and waiting, I decided it had been too long since I created a real abstract. Rather than shooting at 1/100th  of a second at shallow depth of field and still getting some wind blur, I opted for a 1 second exposure. Let the wind blow…I said. I love abstracts but I am not a big fan of contrived pictures. The more I shot, the more I began to see a reason for making this picture. You never know if you do not try.

The color in this picture has not been altered. You are seeing the very last ray of light striking this Short-eared Owl. My camera white balance was set on auto. I overexposed the image on purpose because I feared this picture would look a lot like the first dewy web picture in today’s post. Pure black backgrounds can be artistic with a spider web, not so much with an owl. In the editing process I dropped the values in the owl, while leaving the background as it is. So the owl is as seen, and as shot, and the background was lightened by the overexposure at the time I made the picture. Sometimes compromises are necessary. This is a unique but interesting photo.

I’ve made my share of land arch photos at Arches N. P., Utah, mostly dripping in the color of early light.

When I am south of the area around Moab Utah, it is difficult for me to drive past Wilson Arch on the state highway, and not do something photographic with it. In my first stop here in the 1990s it was just getting light and I opted to grace the opening with the colors of sunrise, while leaving the front of the arch almost in darkness. This time I was traveling with a friend and we came to Wilson during the light of midday. I knew we would only spend a few minutes here so after first photographing a cute little Sage Brush Lizard, I worked fast to make something…..anything of the scene. Clean compositions, busy but ordered, vertical, horizontal. How much can you do in five minutes? Actually quite a bit. Every image I made that day had Wilson written all over it, but they were also each unique from one another. I much prefer the busy but vertical over the horizontal image below.

It’s very easy in a brief shoot, to grab one decent image and move one. You can never move around a subject too much, and you can never make too many pictures.

This first picture is nice but you have to (non literally) walk around the fallen tree limb in order reach the opening in the arch.

In this picture there is no actual path to the opening, but visually, the dead tree leads us in the correct direction. 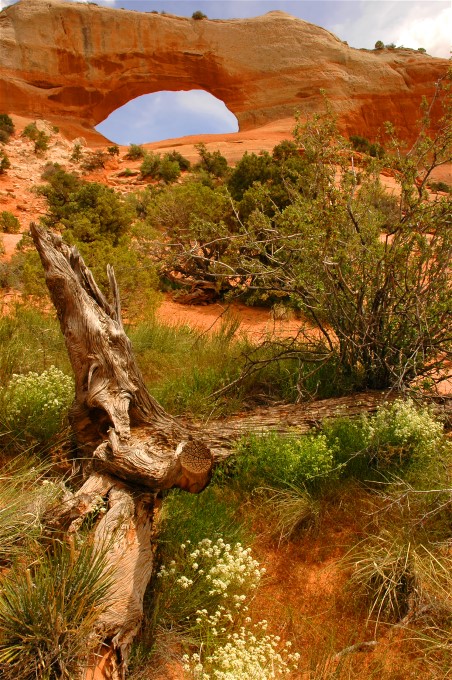 Well if you’ve enjoyed our little talk half as much as I have, you have had a good time.

In an ode to my favorite childhood cowboy and cowgirl,  Roy Rogers and Dale Evans, “happy trails to you, til we meet again”, Wayne