Posted on October 13, 2015 by nelsonearthimages

My favorite North American herd animal is the Pronghorn, called by many, Antelope. As I understand it, they are distant relatives to the antelope, and close relatives to wild goats. They photograph very nicely which always pleases the photographer in me. Even with subjects like flowers, my favorites have forever been those that present great opportunities to me as a photographer.

I certainly love Whitetail and Mule Deer, Elk, Bison, Bighorn Sheep, Mt. Goats and all the rest, but Pronghorns have a sort of regal quality to them that comes across in pictures. Then they have that “not too big, not to small” aspect to them as well. Just right.

The first two pictures below come from wildlife photographer Jess Lee, and the next one is from Tringa.org. 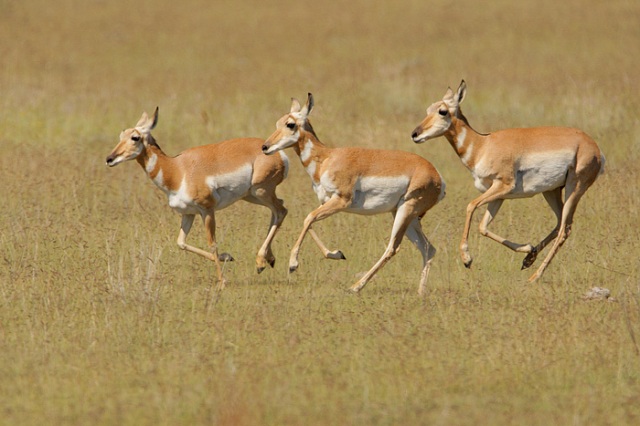 Below are few of my own Pronghorn images. 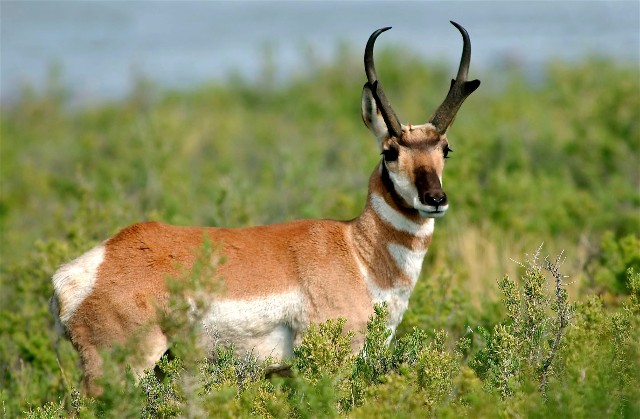 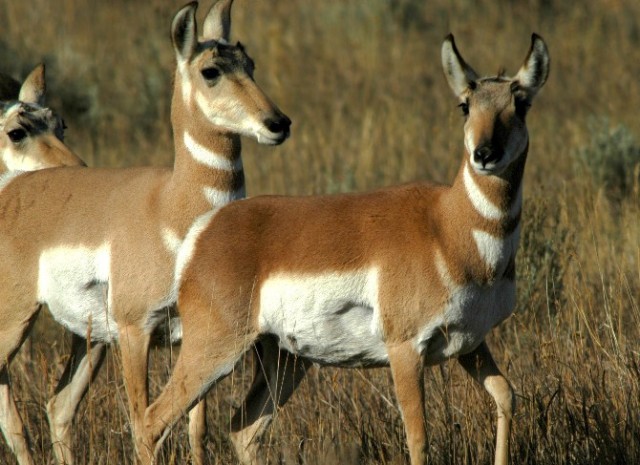 There’s nothing like big game hunting with a camera instead of a gun.

The text and science info below comes directly from The National Wildlife Federation.

Pronghorns are one of North America’s most interesting mammals. Not only do pronghorns have the longest land migration in the continental United States, they also are the fastest land animal in North America.

Pronghorns can run at speeds close to 60 miles per hour. Although pronghorns are not as fast as cheetahs, they maintain a fast speed for a longer period of time than cheetahs. When a cheetah has run out of energy, the pronghorn is still going. They’re true marathon runners!

Even more amazing than its speed is the pronghorn’s migration. Herds of pronghorns migrate 150 miles each way between Wyoming’s Upper Green River Basin and Grand Teton National Park. The only other land animal to travel farther in North America is the caribou.

The 300 mile trip is grueling and requires crossing private property and fences. In the past, pronghorns had to worry about predators and cold weather. Today, the bigger threats are cars, impassable fences and development. The National Wildlife Federation and its affiliates are working hard to create wildlife corridors for pronghorns and other migratory wildlife and reduce conflicts between animals and people.

Description: Pronghorns are ungulates (hoofed animals) and related to goats and antelope. They have the body shape of a deer with long legs, short tail and a long snout.

The fur is a reddish-brown color, but it can also be tan or darker brown. Pronghorns have white markings on the face, neck, stomach and rump. The neck markings are white stripes. The rump has extra long white hairs that the pronghorn can stick up when scared. This also signals to other pronghorns that danger is nearby.

The most noticeable characteristic of pronghorns is also the source of their common name. Both males and females have a pair of short horns on the top of the head. The female’s horns are small, usually only a bump. In contrast, the males’ horns are around 10-12 inches long. They also have a unique shape, because unlike other ungulates, a pronghorn’s horns point backwards. The horns extend straight up and then curve towards the rump. At the front of the horn is a small notch or prong that points forward. Hence the name, pronghorn!

Pronghorns have large eyes and fantastic vision. Their large eyes can spot predators from very far away, which is helpful on the flat grassland habitat of the Red Desert and the Great Plains.

Size: Pronghorns are about 4 ½ feet long, 3 feet tall and weigh between 90-150 pounds depending on the sex. Females weigh less.

Diet: Pronghorns are herbivores. They eat grasses, forbs, sagebrush and other prairie plants. Pronghorns digest their food twice. After they swallow food, it passes through the stomach and then the pronghorn regurgitates it. This process allows the pronghorn to break the plant material into smaller pieces so that more nutrients are absorbed. The regurgitated food is called cud.

They seldom drink water, because they receive most of their water from the plants they eat.

Typical Lifespan: Pronghorns have an average lifespan of around 10 years.

Habitat: Pronghorns like open plains, fields, grasslands, brush, deserts and basins. Between the summer and winter, pronghorns migrate between feeding grounds to survive the harsh winter.

Range: Pronghorns are only found in North America. Their natural range extended from southern Canada to northern Mexico. Today, pronghorns are mainly found in the United States in the Great Plains, Wyoming, Montana, northeast California, southeast Oregon, Nevada, Utah, Colorado, Arizona and New Mexico. Some of the highest numbers of pronghorn are in Wyoming in the Red Desert and Yellowstone ecosystems

Communication: Pronghorns depend on their strong vision to communicate. If a pronghorn spots a predator, it raises the white rump hairs. The white patch becomes larger and visible by other pronghorns. They know that the signal means to be on the alert – danger is near. Pronghorns also use smell to attract mates and signal danger.

Life History and Reproduction: Pronghorns breed in late summer or fall depending on their location – those in the southern part of the range tend to breed earlier. Males have breeding territories with a group of females that they defend against other males. Fighting between males can become very heated with aggressive movements and even physical combat. Some pronghorns can be seriously injured during these battles.

Male pronghorns breed with multiple females within their territory. After mating, the females are pregnant throughout the winter and they give birth in the spring. The females have either 1 or 2 fawns. Although fawns can stand within a day of birth, they are still weak for a few days and must be protected from predators. The fawns stay with their mother for about a year until they become independent.

The migration of pronghorns depends entirely on where the pronghorn lives. Some do not even need to migrate, because the nearby land has plenty of food all year long. The most famous pronghorn migration is also the longest land migration in the continental United States.

In November, the snow starts falling in Wyoming and the local pronghorn herd knows that it will not be long before the snow gets too deep. In small herds, they start migrating south from Grand Teton National Park across government land, private lands and ranches. For 3 days, the herd is on the move and sometimes the pronghorns have to travel under fences and near roads. If they make it to the Upper Green River Valley, then the pronghorns will make the journey back north to greener pastures in April. Several herds with about 400 pronghorns, make the 300 mile roundtrip journey.

Habitat Loss – Fences and roads make it difficult for pronghorns to migrate.

Two subspecies of pronghorn are on the Endangered Species List. Peninsular pronghorns and Sonoran pronghorns are both listed as Endangered.

Putting the Squeeze on Pronghorns

Homeless on the Range

Smithsonian Magazine – End of the Road?

I saw my first herd of Pronghorn when I was a child on vacation with my parents. It was either western South Dakota or Wyoming where they appeared.

When I lived in Colorado the closest Pronghorns were usually about 40 minutes away by car. I would on occasion, take off just to watch them at a distance. My longest lens for my 35mm camera at the time was a 200mm and it made photography unlikely.

I was in eastern Wyoming on one trip and came across a grouping of several herds with individual animals that numbered well into the thousands and possibly the tens of thousands. I got surprisingly few good images (my fault) but spent almost two hours just watching them interact.

From time to time, I like to drop in these articles that provide info on the subjects that many of us have photographed, instead of dealing with the art and technology of photography itself.  This blog is of course about photography, nature, and much more.