Posted on September 25, 2012 by nelsonearthimages

For the first time in quite a while, I am seeing a lot of discussion about images that have been Photoshopped or otherwise altered.

The first talk came in a link (deleted) published on Twitter by the editor of a bird magazine.  Publications are beginning to once again, demand more honesty in the images submitted by photographers. My view is simple, the basic integrity of the original scene should be intact for an information magazine to publish the image. I care not about cropping, sharpening, removing undistinguishable out of focus foliage, and working with things like contrast. What is shown in the published image should be what existed at the moment the picture was taken.  No cloned birds or added plants etc.  This is photojournalism, not necessarily art. I say not necessarily art, because straightforward photojournalism can be art in and of itself.  When there are captive animals it should state captive animal near the picture.

I have no problem with anyone doing what they want with their own pictures to be used by themselves. The images shared on Facebook or Flickr Photos are published by you.  I enjoy viewing the creations of the mind, but I do tire of them eventually. The same is true of my own manipulations.  They become an outlet for me to have a little fun, but eventually I move on to other things.  I rarely create manipulations of nature.  I have a spiritual connection to nature and I prefer  to feature my subjects, not myself. When your nature photos have strong subjects, or contain an artistic sense of light and shadow, or a great point of view, or some nice action, you will get all the credit you could hope for. That is my own personal view, but not something I would want to impose on anybody else.

A lot of my fellow photographers used to ask me why I always get to Horicon Marsh NWR here in WI, so early in the morning.  They understood that I might want to make an occasional picture of an egret or some such bird in the morning light, but that can’t be a reason to arrive pre-sunrise 20 out of 25 visits in one season. After all most of those early morning bird shots don’t turn out. That last point is true.  Experiencing the sounds and atmosphere of a marsh like Horicon before the light of day arrives and brings quiet to the creatures of the night, was worth the early trip, even if I don’t get a single picture.  Oh yea, then there were mornings like the one below.  As near as I can figure, I have photographed around 50 different sunrises at Horicon over the years. Considering I live over 90 miles away, it meant a lot of 3:00am starts to my day.  I wouldn’t trade a single one.

This particular image was made on Federal Dike Rd as you look back towards the first pond.

There’s light and dark, short and tall, but we are all in this together. This image of a Brown and some American White Pelicans was made on the Gulf of Mexico, in Rockport, Texas. A wonderful place. We could learn from Pelicans. 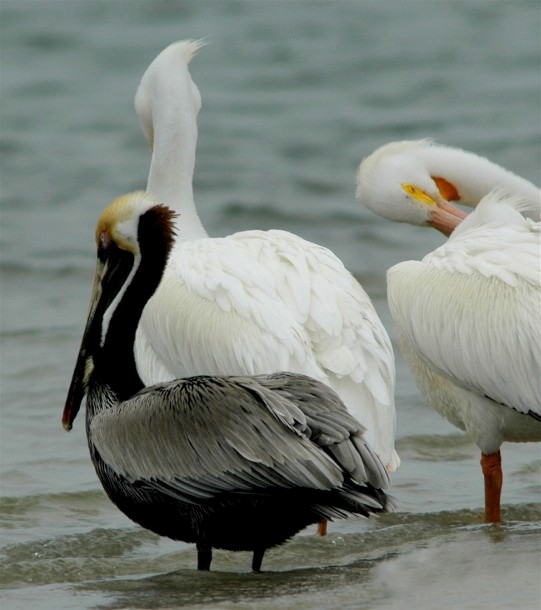 One of my favorite Bald Eagles over the years is this one.  He/she is ½ of a nesting pair.  Their nesting site was on a river in a suburban residential neighborhood which of course meant they paid little attention to comings and goings of human animals.   Mid-eastern Wisconsin.

Speaking of favorite birds of a particular species, this Rough-legged Hawk gave me more opportunities than any other of that type.  While I have always loved this series of wing spreads in the snow, actually the hawk has just missed grabbing a male Ring-necked Pheasant. The pheasant then burrowed under the snow and the hawk is looking for movement. It did grab the pheasant while striking a pose similar to the first image. The pheasant escaped again only die alone about one quarter of a mile from this location.  Hopefully this or another hawk made use of him. 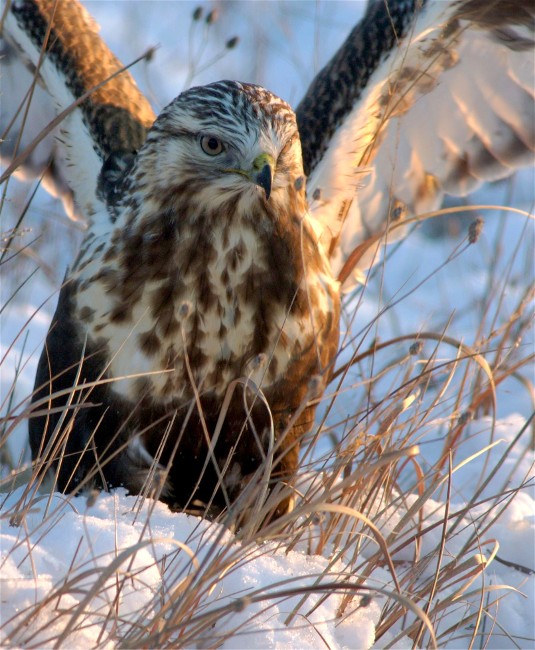 Usually cooperative and always chunky, the Ruddy Turnstone.  This is a bird that I have mentioned before.  It actually walked on my leg.  Twice.  Going and coming. This was made near Racine, Wisconsin’s Wind Point Light.  On a good year this stretch of Lake Michigan becomes a premier shorebird location. 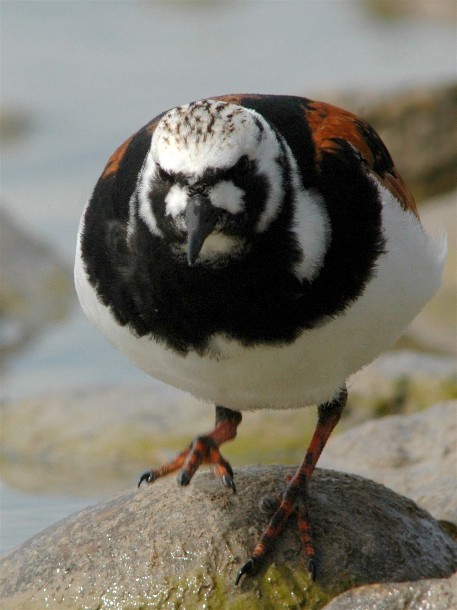 I was entertained for what seemed like an eternity by these two young Yellow-bellied Marmots. The colony lives above 12.000 feet but the lack of oxygen didn’t slow them down. Rocky Mt. National Park, Colorado. 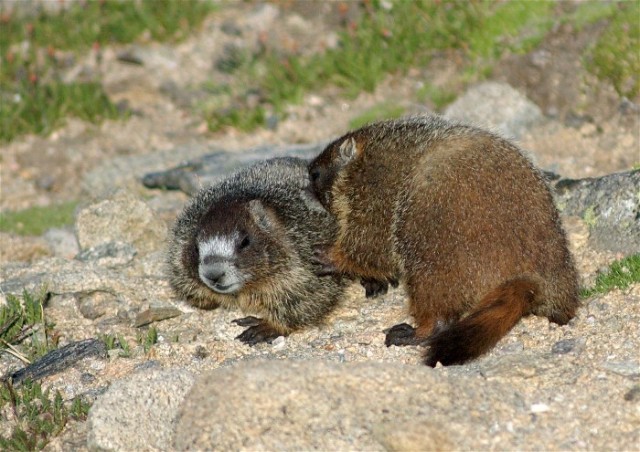 Of course there is nothing more common in my parts than the Ring-billed Gull.  When I wanted to make flight pictures of them, I generally would wait for a windy day so the birds would sort of “hang” in mid-air for a while. I would try to pick locations where there was a lake bank of 25 or 30 feet in height.  This would allow for images that put the viewer in the air with the birds. 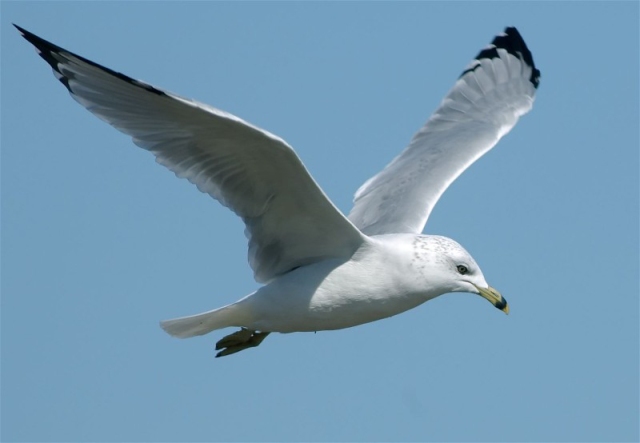 I’m always hesitant to show images made in “the old days“ when I would make one or two trips a year to public zoos to create stock photos.  So many years of hard work to photograph animals in the wild makes these images less than my favorites. Still some of those critters are quite beautiful.  This one of a Bengal (I think) Tiger was actually made around 2005 or so when I taught a series of wildlife workshops at a zoo.

Same location, different workshop.  Nothing cuter than a Meercat in a natural setting…even if it was a zoo

Thank you for stopping 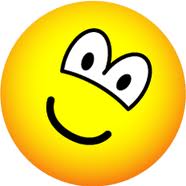