Posted on October 27, 2011 by nelsonearthimages

True silence is the rest of the mind; it is to the spirit what sleep is to the body, nourishment and refreshment. ~William Penn

Back during the time when I began scanning slides and turning them into digital files, there was much discussion and consternation about the ethics of altering pictures in the editing process.  Two prominent (still so) nature photographers and one international magazine were taken to task for altering (published) images and not disclosing that fact.  I agreed with those who believed that those people were being dishonest.

I suppose times change.  Reality tv permeates everywhere, yet all that are shown in this medium, know full well, what acting needs to be done for success.  Political ads need not (and usually don’t) contain any truth whatsoever.  It is no surprise that there is little to no uproar over nature images that have been re-created by a photographer sitting at home in front of their computer.

I do not now, nor have I ever had anything against doing anything you want to your own pictures.  It is all about who you are (yes!) and what you do with those pictures.  Since 1999 I have had a folder, be it small, of digitized images.  I add a couple of shots a year to that folder.  I had those photos in a gallery on my website from 2000 through 2006.   I took it down so that visitors to my site would not have doubts as to the reality of other images, in particular  wildlife shots.  It is the danger that exists in showing altered images.  I think any images that will be used in books, magazines or even a website, and that you know will be perceived as a straight image, need to be labeled as to what you have done as far as altering actual content.  What you make for yourself and to share with your friends, or what you create as “art only”, is your business and you should enjoy the creative process.  Also many images are clearly “photoshopped”.  You can tell at a glance. In my opinion those pictures stand by themselves,  and there is no value in disclosing what everyone can plainly see.   High Dynamic Range (HDR) imagery is something that I sometimes use and it can be used to simply bring the contrast range of a picture in line with the natural human perception, accentuate the colors of a picture and make them pop, or to create digital art.  Pictures in the last two categories can run the gamut from artistic beauties, right onto looking like a Warner Brothers cartoon.

The biggest single issue I have with the re-creation of images is when very well-known and much copied wildlife photographers/workshop teachers, sanitize and clean both the subjects and the backgrounds in every single image they make.  Yes there is a difference in removing an out of focus piece of grass in the foreground of a picture, or removing an out of focus sun burned branch in the background, and removing or recreating all recognizable vegetation in every image you make.  That becomes the norm for a whole new generation of wildlife photographers.  Soon the child sitting in a Brooklyn classroom is “educated” minus the truth about the health issues of wild animals, the natural habitat that is necessary for these creatures to survive, and the urban sprawl that threatens their existence.   When you are a highly emulated and much published photographer, you have a responsibility to give back to your subjects by making sure the truth gets out.  It is okay to “cleanse” some of your images, but you need to share pictures that contain the truth as well.  Every picture you make is not all about you.

When I create digital art I use a variety of methods.  Sometimes it is as simple as choosing an appropriate image, and placing a pre-existing filter over the photo.   Sometimes I use the lasso tool and encircle parts of the picture so I can use things like the Gaussian Blur, or color balance, or adding texture to that specific part of the image.  I would not pretend to be capable of teaching Photoshop techniques, as I use extreme manipulation only about two times per year.

Impressionism has always been my favorite form of landscape painting.  That is to say it is my favorite type to view as I certainly cannot paint.   There are many methods of approximating this style naturally in photography.  Proper use of backlighting, and shooting ground level landscapes through the heat waves of summer are two ways to achieve that end.  Shooting multiple in camera exposures of the same scene with slight camera position adjustments is another.   That same effect can be gained via the editing process by laying several of the same shot over one another with HDR or Photoshop software.  You do so with a slight alteration in the subject position within the picture frame. You will also need to adjust the exposures of each copy or you will wind up with a black rectangle. When I re-create Impressionist images via the editing process I always go a bit “over the top” intentionally.  I do this as to make sure the viewer will see clearly that this is an altered image.

The fall scene below was created from the semi abstract image right beneath it. 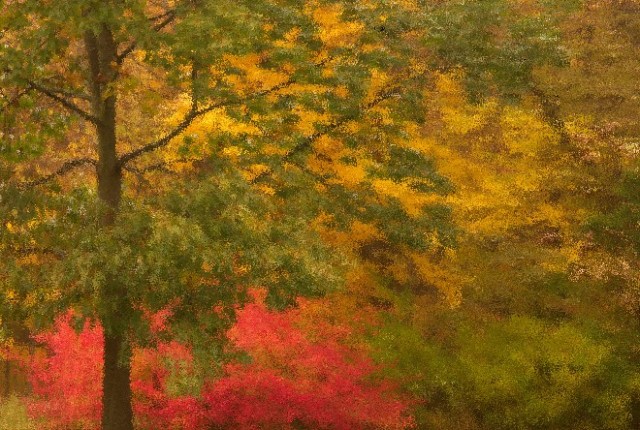 I am sure that I used different techniques, to create the next autumn image.  Those techniques are “un-remembered” by me and the location of the original RAW file also seems to be lost.  Oddly enough I do remember the moment I took this picture, deep in the Chequamegon N.F. in Wisconsin’s north woods.  Those memories will always be more valuable to me than any Photoshop techniques that I have used. 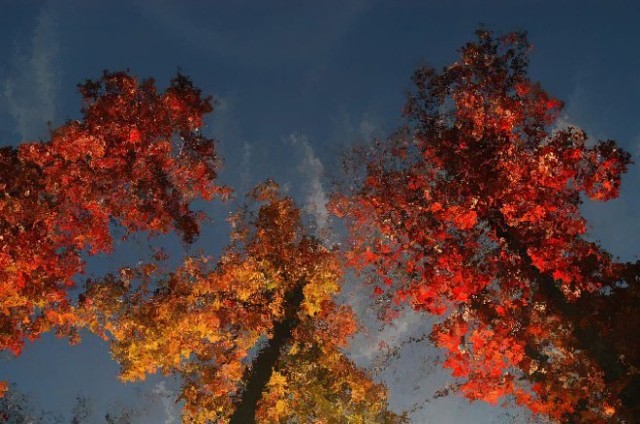 While there was definite artistic intent on my part with the above images, the pictures below were developed mainly for fun.

I rarely digitize wildlife images but I made an exception with this sky full of Dunlins. 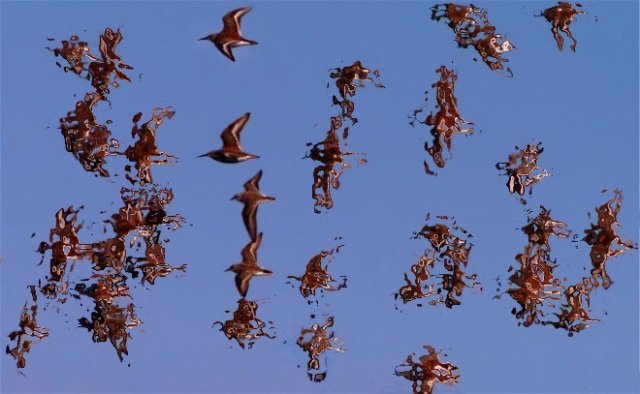 I love rendering old architecture, or in this case what appears to be old, in black & white  In this rendition I included a splash of real world color in a monochromatic world.  Looks sort of like they were born in the Twilight Zone. 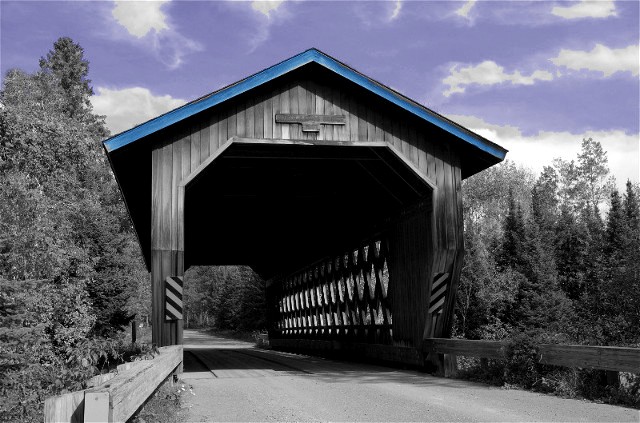 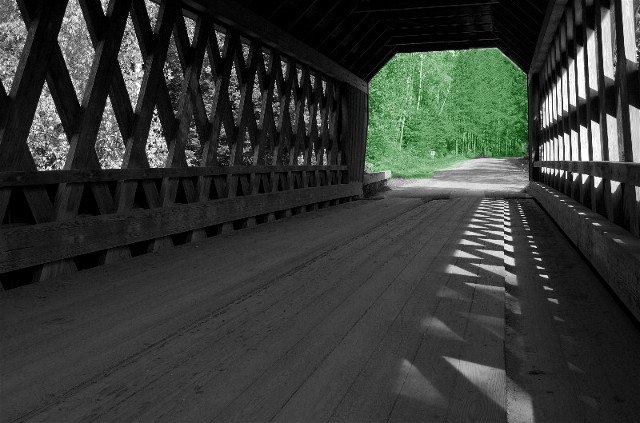 I saw the angel in the marble and carved until I set him free. ~Michelangelo

Every future contains the past.   Wayne Nelson