Posted on February 27, 2019 by nelsonearthimages

I always loved photographing herps, also known as reptiles and /or amphibians.

The images below both come from my Flickr group named Earth Images.

The first photo was made by Sophie Cross and is that of a Western
Nettled Dragon (such a cool name), and the second is from Fabio
Fornasari of a crocodile attempting to swallow a very large fish.

Thanks to both for submitting such fine images to my group.

I can find no better place to begin with my own images than
with the subject of birds.

There’s nothing more enjoyable or more pleasant than relaxing in my
car while I watch great birds like this male Red-breasted Merganser
swimming to and fro. It becomes especially exciting when they swim at
the camera. 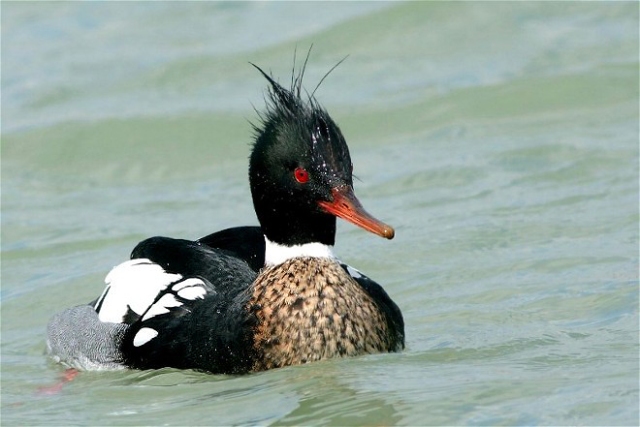 Winter is a great time to photograph birds from automobiles. I spent a
fair amount of my photographic life out of doors in the cold of
winter, so being surrounded by the shelter of a car whilst a couple of
handsome male Ring-necked Pheasants trample through the snow (and
cold) is a lot easier.

I follow focused these two as they constantly changed their positions
and therefore my compositions, on a regular basis.

There is a well-known professional bird photographer who’s business
carries the name Birds as Art. It is a great name because birds are a
natural form of art, or as I often refer to them, artists in and of
themselves. I just needed to be there, and be ready. With of course
some knowledge in the “art” of using my equipment.

How can any photographer go wrong with a male Goldfinch preening and
posing right in front of them. I digitally removed a couple of out of
focus branches in this photo. I likely would have left them in the
picture if my depth of field would have covered those branches with
focus.

Depth of field becomes more shallow as we get closer to our subjects
and such was the case with these Barn Swallows. That actually worked
in my favor here as the second bird has visual separation from the
closest bird. It is fuzzy enough to be extremely soft and therefore
not bothersome to the eye. Shallow depth of field also prospered this
picture in the sense that the boardwalk posts in the background became
soft and unobtrusive. Shallow DOF can work against or with bird
imagery depending on the circumstances.

It never becomes more apparent that birds are natural art than
when they strike artistic poses before us and our cameras.

This elegant male Northern Pintail not only posed artistically time
and time again, but did so in water that was free of both natural and
man-made debris. 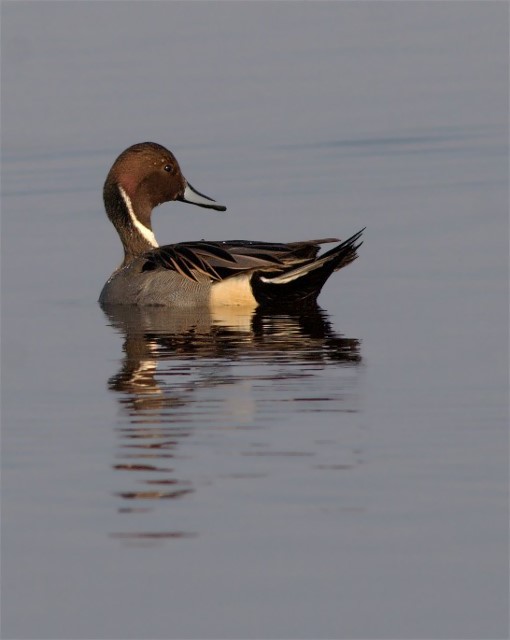 An artistic bird in an artistic pose, becomes even more a work of
natural art when the light is artistic as well.  This little Snowy
Egret was fishing near the road just after sunrise. There was no need
to intentionally underexpose this photo because my camera meter did so
automatically to compensate for the white, sunny bird. That reduced
the exposure on the background from very dark, to almost back.  Keep
in mind, this was made many, many years ago on film.  It was necessary
back then to understand exposure completely due to the fact there was
no way to review any image. At least not until you got your film back
from the lab several days later. It tended to be a bit too late at
that point. 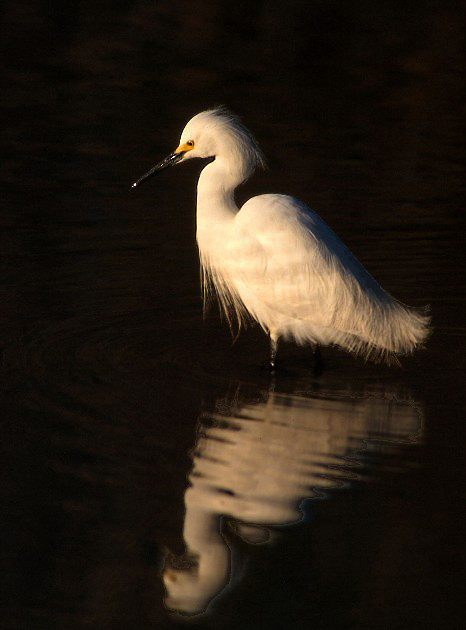 Depth of field, or lack thereof, is at its most obvious as I stated
before, when we are truly close to our subject.

This feather picture is an old studio image that I made on film. It is
lit by studio lights that I arranged in a way that I believed would
cause the light to be artistic. Only the shaft of the feather is totally in focus. As the feather moves farther from our eyes, it loses focus quickly.

Of course when you create and compose your own scene, including its
light, you can work carefully and methodically, making minute
adjustments as I did here.

Let’s move on to some landscapes and we’ll begin with a fairly
pedestrian image from a great place commonly known as Yellowstone N.
P.

When I was a ways from home, I made images all day no matter the conditions. Normally, I prefer early or late light, or often even cloudy days where saturation is at its peak. In this case, it was late in the morning but I did not think I
would be back at this spot again. In my opinion the scene while pretty
average in quality, describes what much of Yellowstone looks or better
said, feels like.

This scene of beautiful autumn colors captured under soft, overcast
light, is as “straight up” as it can get. This is an old medium format
film picture taken from an overlook platform near Mellen, Wisconsin.
It doesn’t get much simpler than this. An easy exposure obtained from
a separate hand held incident meter. The overcast light meant
everything was under a similar exposure. All I needed to do was
compose color. A fairly similar image made on a different year graced
the cover of a calendar. 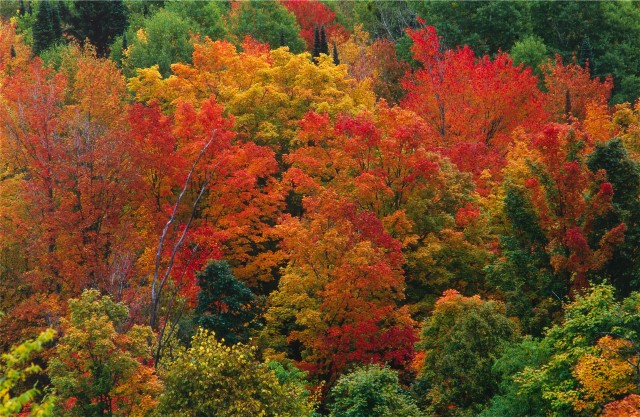 Creating an abstract landscape is pretty easy when the land itself is
already an abstract.  This is the Badlands of South Dakota at sunrise
and this photo also began its life on film. 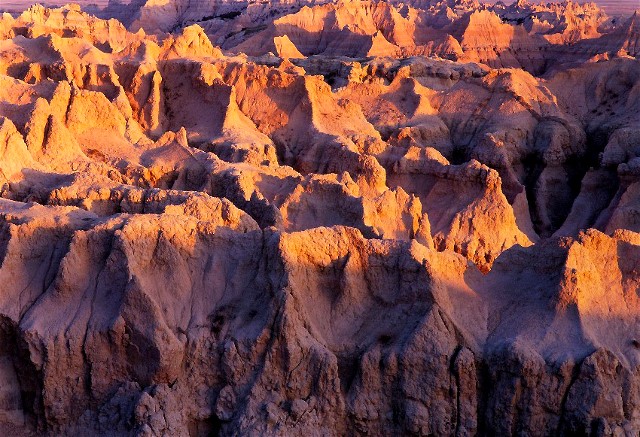 Let’s get back once again to concept of point of focus and the necessity of it being pinpoint when depth of field is at a minimum.

For two summers running, I traveled to photograph the endangered
Karner Blue Butterfly. On my second trip it seemed to take forever to
locate any of the little critters, but when I finally did, they began
landing on me including on my hand. My hand here appears scruffy and
fat, but while it was scruffy, it was not that fat. I held my hand out from my tripod
mounted camera, and moved it in and out until it appeared to be in
focus, and then click, click, click.

You never know where your next picture will be. 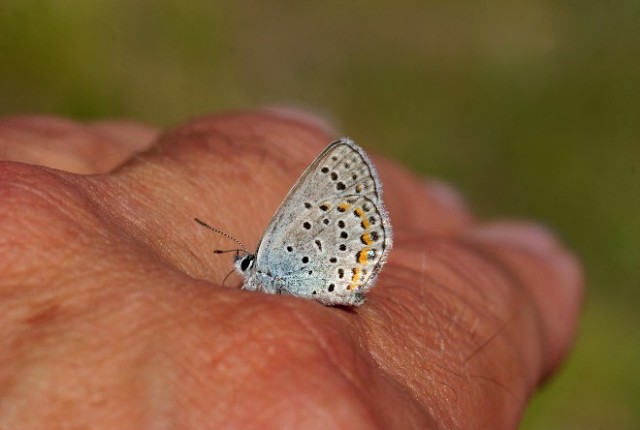 It seems natural fro me to close today’s article with a sunset, but
I have far more sunrise images at my disposal than sunsets.

I am truly losing track of where I created some of these nondescript
types of images. This was either made in the Nicolet National Forest
in Wisconsin, or by a small lake in North Dakota. 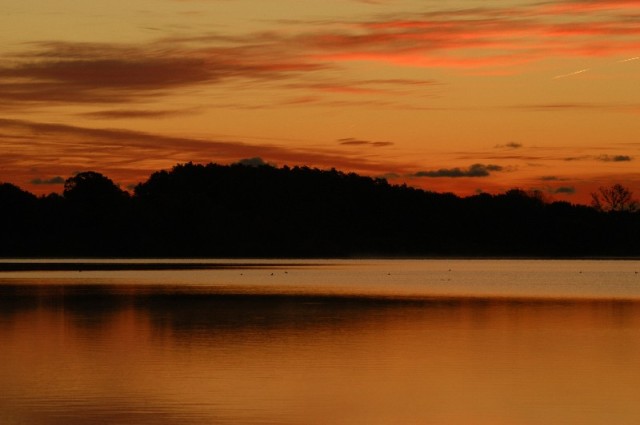 Have a great day and may God Bless,