Posted on November 22, 2017 by nelsonearthimages

Recently there were 4 black police officers killed out of several who were shot in a space of 7 days here in America. There were no calls from the political left for gun control. There were no screams of racism by Black Lives Matter. There were no NFL players displaying themselves in protest. Every dictionary should show the definition of liberal, left-wing and ardent Democrats as being hypocrites.

The poster below is statistically correct. It refers to the percentages among black Americans who have been killed and who is killing them.  Thanks to Larry Elder for the poster. 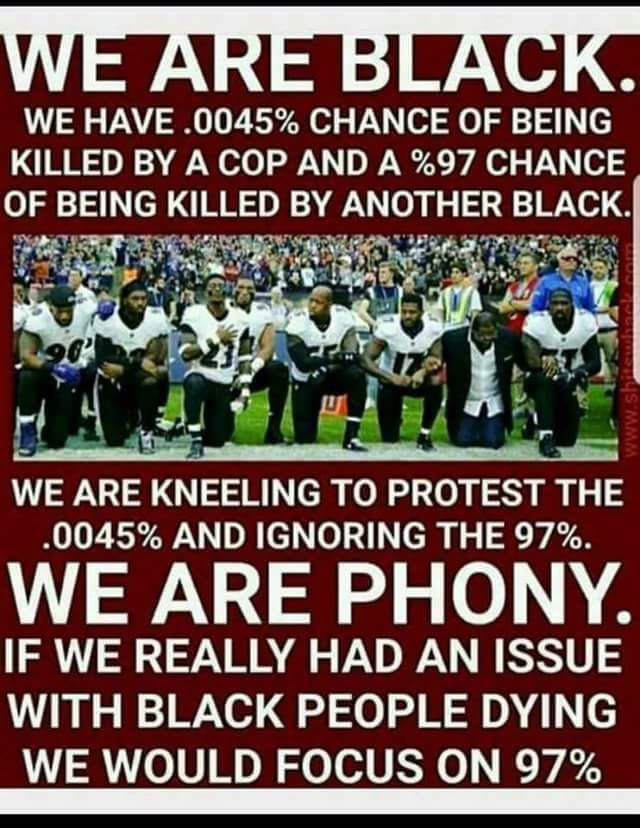 Those who scream about how difficult it can be to be a black person in America are correct. You are slaughtered by criminals in our central cities, and you are held hostage by a political (Democrat) party who only cares about the power they obtain from keeping you enslaved, poor, and angry.

I salute those who refuse to be used and instead stand up for truth and a “real” and a meaningful equality.

“Don’t blame the system [for black incarceration]. It starts at home. It starts with how you raise your children. If a young man doesn’t have a father figure, he’ll go find a father figure.”
–Denzel Washington, November, 2017

I would follow-up on my past writings about men who are sexual predators of women and sometimes children, and my proclamation that it appears to me that America’s left-wing is winning the battle as to who is the most perverted and predatory. I would except, I feel bad for the political left. They are so winning the battle in abusing the most women that it is embarrassing. Democrat Senators, New York Times’ journalists and on and on and on. You have to pay attention because the liberal press, first prints the story and then seems to forget to make the constant follow-ups and haranguing that they produce for anything negative a conservative does. They are in fact the watchdogs of (or for) their own perverts and it isn’t working. Thankfully today there are many other avenues to find the truth.

As volatile and dangerously unstable as the world is today, it is amazing how in many ways it is the same ole, same ole. What’s happening is, the bar keeps being pushed farther and farther every single day. Those pushes are just far enough, that many never realize them until it is too late. That is true of many political/social conservatives who oppose what they see, but seem to say “oh, it’s not so bad”, but is most damaging among those old Democrats who have allowed their mind and their principles to be co-opted inch by inch, moment by moment by leftist extremists, to the point they are supporting things they “knew” to be horrible, and anti Democracy at one time. The funny thing is, the enormous ego of many of those who have fathered this leftist movement, has prompted them to tell us what they are planning and doing many times in their published writings. Still, millions stand by and allow their country and their fundamental belief system to be raped by hateful, self-described extremists. Day by day, one step at a time.

Because I read the Bible (scorned or intentionally misinterpreted by the left, including the Christian left), I have a pretty good feel for what is happening and what is yet to come. I suggest others do the same and become enlightened.

Well now, I haven’t ventured into politics or social/religious issues for a while, and it seems there have been a few thoughts building up.