Posted on November 11, 2017 by nelsonearthimages

I am rarely asked any questions about this blog, but when I am, it is usually the same one. The answer is no, I am in no way done commenting on political, social and religious issues here on the Earth Images Blog. Nor am I finished sharing the great photographic art of the world’s top photographers on these pages. I am incapable of having a vehicle for my opinions (this blog), but not comment on the world around me. With that said, everyone needs a respite or an escape every so often. Those times allow me to dig into my own photographic archives, and talk about image making.

Most people first venture into serious photography as a means to escape the “world as we know it”. When I travel back in time to write about my photographic adventures (forty years worth), I am also seeking an escape route. I am certainly no Superman, but I still need a “fortress of solitude”. It’s okay to share the place where you seek solitude, as much as that seems to be an oxymoron.

Over the past two years in the life of this blog, when I do share my own pictures, I attempt to show you what I like and then tell you why, what I think is okay but not great, and also what I deem as a failure, and why. In general, if I share images on this blog that are negatively criticized, they will belong to me. We all have made good, fair and bad photos, but I believe in using my own images as the instructive material for what not to do just as much as to illustrate what you should or at least could do.

Flowers in general, are a common and important subject for nature photographers. During my days of roaming around in nature looking for subjects, scenes with flowers were always a joy for me.

The problem with scenes like to see below is, how do we find some sort of rhythm or pattern? In other words, can we find order in the chaos? If you were with me at the time of making this image, you would probably say I did alright. It was indeed a chaotic scene. Of course, most who might view this image will never know what this meadow actually looked like. In the end, it is a so, so picture. It’s strongest point is the colorful scene is rather joyous. Its weakest point is that it is hard to tell just what I wanted viewers to take away from it. 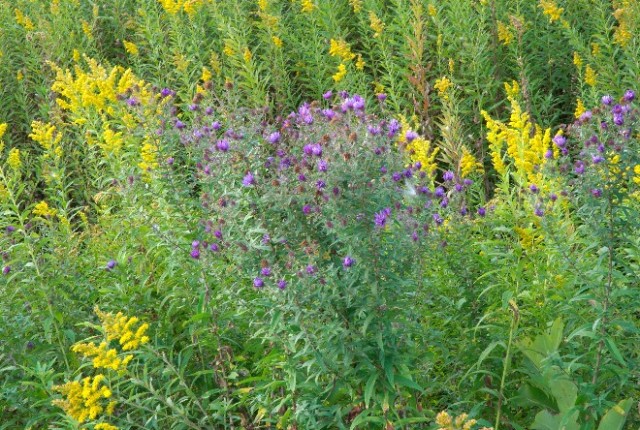 I love working with flora and backlight or extreme sidelight. Often the more abstract it becomes, the happier I am. In this case I think the image fails. I do believe, that if I had digitally removed the out of focus yellow plants in the background, and secured a featureless black background, the image would be acceptable. That however, is really not my thing so this image will be returned to living quietly in the dark recesses of my files.

Single flower images are considered by many to be trite. They are my favorite style of flower photography.

This wild Geranium was calling to me from 50 paces away.

If less is more, can even less be even more?

It can’t get much simpler than a blue Chicory flower and a blue sky. Normally I would search for a warm (yellow, orange, red) flower to “pop” from a blue sky, but this image entitled blue on blue, really says what I wanted to say on that morning of August 5th, 2009. That one bit of green that jumps out of the shadow at us, adds all that is needed.

In my last post, I showed a four shot sequence of a Rocky Mt. river rapids with explanations of how and why I did what I did when creating the images. The images were technically okay but pretty boring.

I was hiking in the rainforests of Washington State when I came across this thin but very high waterfall. There was literally no way possible to get anything but straight up and down photos. I finally found one spot at the edge of ravine that gave me one view of the water as it crashed to the earth. As I set up my tripod and medium format film camera to make the picture, I forgot that rainforests are soft, wet places. My footing gave way and I rolled all the way (maybe 100 feet) to the bottom of the ravine, grasping my camera and tripod with every slide and roll I took, while leaving the rest of my expensive camera gear at the top. I spent weeks (well okay, maybe 20 minutes) trying to find a portion of the hillside that was solid enough for me to get some footing and return to the top. 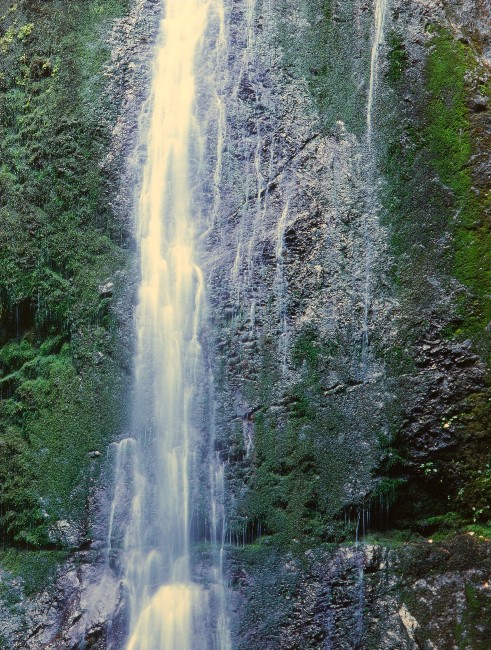 I never got the image that was in my mind’s eye, but the hike (maybe six miles round trip), the adventure, and the story to tell was worth it.

I love photographing falling water and I will use manmade waterfalls if I think the perspective and my ability to choose slow shutter speeds is there.

The waterfall below is in a county park and I loved the straight vertical drop of the many ropes of water that were falling over the cement. I felt, if the first image is good, why not a complete abstract that keeps the secret not only of where the falling water starts, but where it ends. 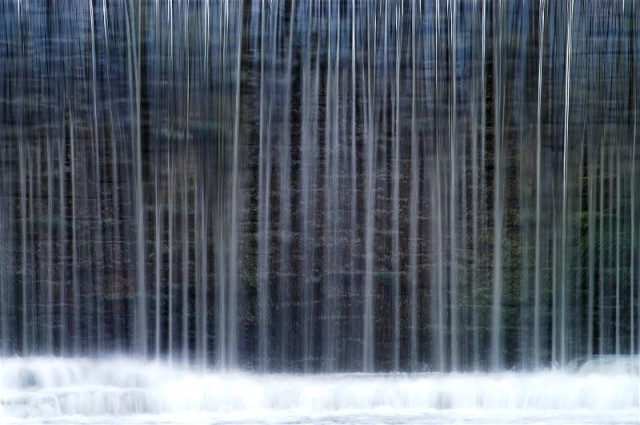 This little manmade falls is in another park.

One form of imagery that I rarely tamper with (editing) once I am home, is landscape photography. Of course when you are photographing one of the world’s greatest scenes there is no reason to tamper. Still, boredom a couple of days ago drove me to crop some images from The Maroon Bells and Maroon Lake in Colorado.

This first image is “as shot“. 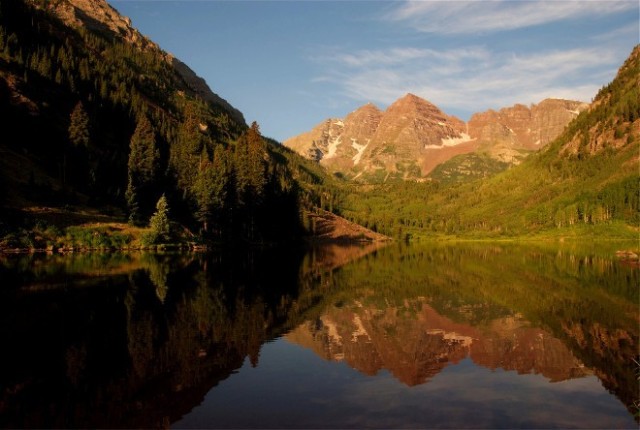 With this photo, I took a file with almost the same perspective as the one above, and shrunk it to bring the mountains and their reflections closer to the edges of the picture frame. In some respects, it has a little more impact.

I took this next one a step further and made it a panorama in its dimensions. That alters the reflection so it is no longer a mirror image, but it works.

I cropped this final image as if I had switched to a longer lens at the time of clicking the shutter. Again, you miss the true mirror reflection but oh those mountains!!! 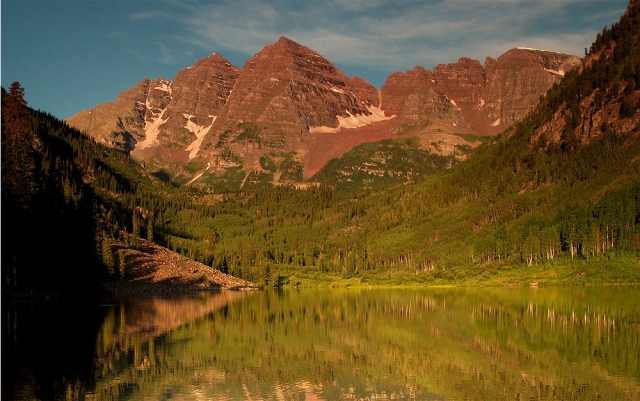 All of these images work well, but of course you would have to struggle to fail with this subject.

Ahhh the color of it all. I spent a great deal of time one afternoon in the Badlands of South Dakota just looking for one rock formation to put under the soon to be golden light of sunset. This pretty land form is reddish brown under mid-day or overcast light. Sometimes it’s about the subject, sometimes the light, and sometimes both.

I have better close-up portraits of Rocky Mt. Bighorn Sheep rams than this, but this particular fellow was interesting in his color. He was almost black in places.

He was very cooperative as food seemed his only interest, but he made it difficult to get clean shots that were void of foliage between he and me.

In my last post I showed a couple of flight shots, one of four American White Pelicans and the other picture of a single one. The four bird shot was decent and the single bird shot was good, but this image of a morning liftoff of six birds is what it is all about. Great light, six distinct birds each in a different body posture. 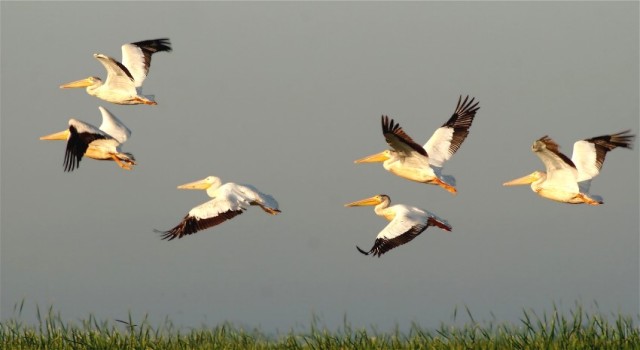 I have a penchant for wildlife images with more than one species within the picture. Pelicans are a species where you often find other birds up close. I recently showed a Pelican with a Great-blue Heron, and in this shot we have a Cormorant with two Pelicans. Pelicans stir up a lot of fish when they are feeding, and other fish eating birds stay close by as to take advantage of the circumstances.

I have only found Brown Pelicans at one location that I have made pictures, that place being on the Gulf of Mexico in Texas. It was late February and I found birds that were both in and out of breeding plumage. This one was clearly in. 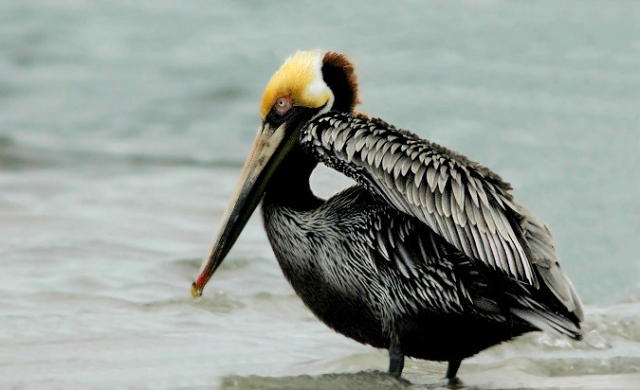 All hawks are strange creatures. They can be amongst the most wary and difficult to make any close images. Yet, at other times they treat us like we are meaningless. A lot of that has to do with the proximity of food. This Swainson’s Hawk in Colorado had its eye on a Prairie Dog and I was absolutely irrelevant.

There are a lot of ways to show in your bird photos, what a specific species is all about. One way is to capture them in a picture that is all encompassing as far as what the bird looks like. Its markings etc. The next best thing is to show behavior that is indicative of the species. Yes, Northern Pintails are dabbling ducks that love to go topsy-turvy in search of underwater plants. This image also visually explains why these birds are called Pintails.

Now I admit, this photo of a Whitetail Deer fawn, just at the age when its spots are about to disappear, is sort of boring. They are not all that cute at this age and the pose and surroundings almost look like it was set up ahead of time. Too good to be true. Still, if you want an image of a deer at that age, in a clean shot that is pleasing and shows clearly what a Whitetail would look like, could you do better?

Fulfilling your intent is much of the reason for making pictures.

The autumn season is slipping away and this early fall image of a remote lake in a northern Wisconsin forest speaks to why most people make pictures in this season. Color! In this case a mirror image of color.

Of course, there is still plenty of time to look down. 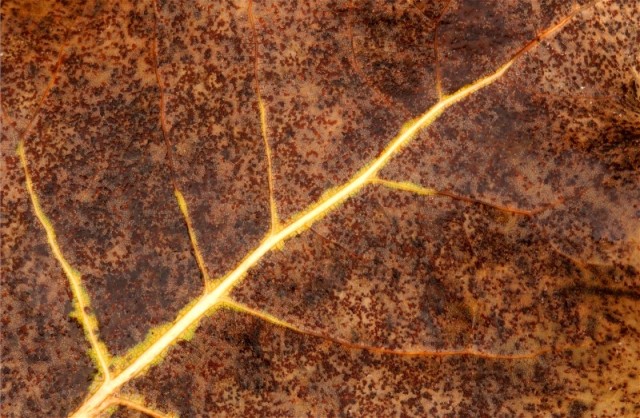 As I write this, I can peak through the blinds in front of me and see snow. I drove in snow this morning. Don’t forget to photograph one of nature’s most powerful subjects…..winter. 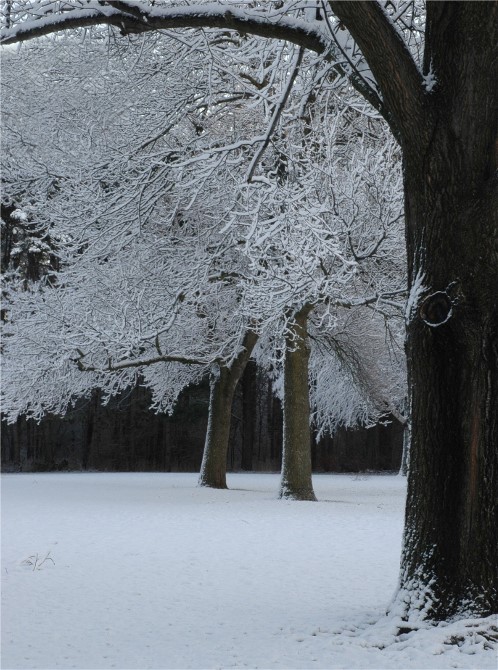 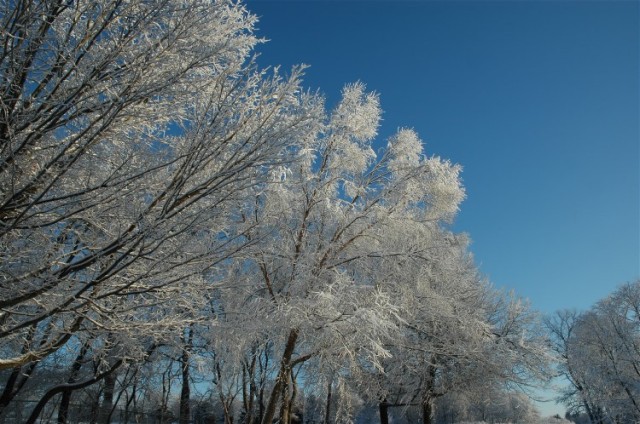 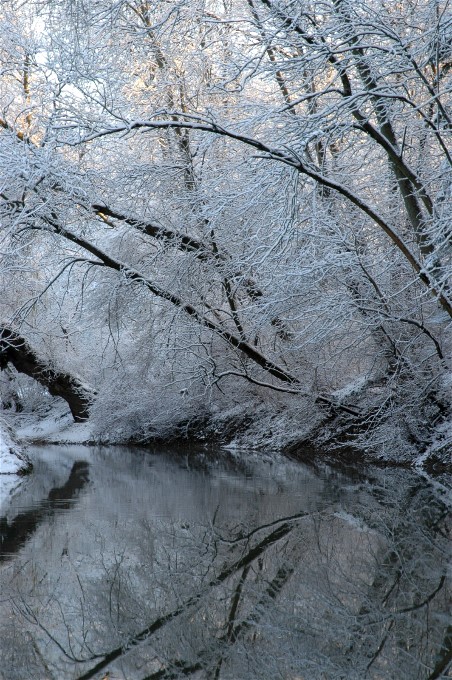 Thank you for allowing me to share my fortress of solitude, proving that we can share even our most personal moments when we choose.

On this Veteran’s Day, please keep in mind all of those who have served us in our military.  When the opportunity presents itself, stand up proudly for our National Anthem.  Show all of those men and women of every color and ethnicity that serve us, how proud you are to be an American,  and how grateful you are to them.