Posted on August 31, 2017 by nelsonearthimages

George Lepp is a truly legendary veteran of all things in outdoor photography. Along with John Shaw he might be the best known teacher of technical photography.

I am not sure of George’s age, but clearly he can still get down on his hands and knees and make top class macros. This one is of a Pandora Moth and it looks much like an extraterrestrial from a 1980s movies.

Kurt Budliger is a premier landscape artist and teacher. His workshops are popular and images like the one below of an autumn waterfall in Acadia N.P., Maine is surely one reason. I get an amazing sense of peace when I view this beautiful image.

Colorado’s Dan Walters is a renowned bird photographer and he “ain’t too bad” with mammals either. He clearly got this endearing image of a Yellow-bellied Marmot around sunrise or sunset. There’s nothing like a crisply photographed furry little critter in the warm light of sunrise/sunset. He made the image on Mt; Evans in Colorado where visitors were never allowed until after sunrise or well below sunset. Rules change and opportunities can change with them.

It is somewhat rare for me to include my own images in a post that includes other photographers. When I do, I generally make sure the pictures are reasonably current and are very good. In this case, I had already randomly selected pictures for this post which was meant only for my own images, when I decided to add the above photos. They were selected for reasons other than their spectacular content.

Waterfalls are a popular subject for all photographers, amateur and professional. I have shown dozens of images of northern Wisconsin’s Morgan Falls. About 20 years separate these two pix, with the older top photo being created first, with film, and a 28mm lens. The wide lens “opens up” the forest and almost makes this fairly Closter phobic location seem roomy. It was created from the same side of the creek, that you first approach the falls. You might say the creek is the falls. Really, Morgan Falls is actually just an 80 foot section of Morgan Creek that happens to drop steeply downhill.

So 20 years later, on the other side of the creek, fairly close to the falls, with a 70mm lens, a very different picture was made. This almost looks like a studio shot with a spotlight.

I love contrasts of all kinds, and water, can in and of itself be a contrast. It can be a hard solid, a dreamy sort of fluid, or a willowy gas. Catching water as both a solid and a fluid in one picture, is not only doable, but pretty easy in these northern climates during winter.

A few seconds in the life of a winter waterfall made for some pleasant contrasts on a chilly winter’s morning. Sharp, icy edges, and soft, blurry falling water.

One of the most ignored subjects for nature photographers is lichen. There is not only an interesting story of how lichens break down rock and wood and turns it into soil, but it is a colorful and texture laden subject. These images are practically antiques and of course, they began their lives on film. 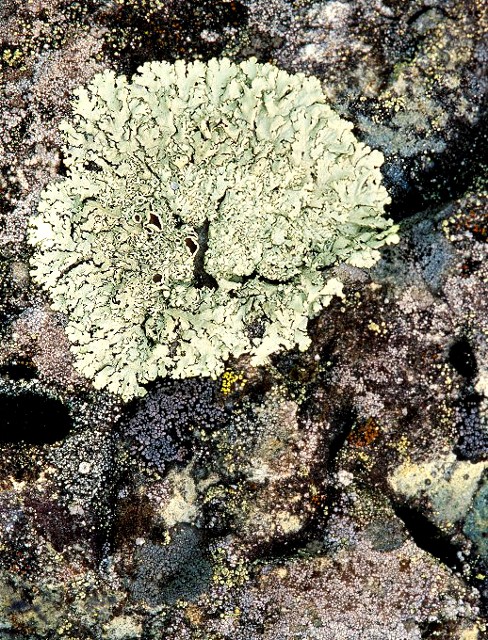 What is reality and what is not? It’s a fair question in the world of photography.

I’ve shown these images of some male Greater Scaup, and a lone (1st image) male Mallard before. They are swimming in a sea of blue, so to speak. I have done nothing to accentuate the color in these photos. I have always enjoyed these shocking blue pictures but when I share them without the back-story, people seem to gag at the color. That shocking blue is merely a blue plastic boat cover reflecting in the water. I love the effects, but admit that the sky would have had to have been awfully blue to create that background for these birds.

Now this is a natural, true blue sky reflecting in a wetland. As this Northern Shoveler motors along peacefully, he does not realize that his collusion with the sky (and therefore the reflective water) would serve as an example of the difference of sky reflections and those from blue plastic.

Of course ultimately, all the pictures are perfectly real, one is just all nature, and one includes a bit of man’s handiwork.

My bird photography began as a subject for my stock files. That meant it was advantageous for me to acquire coverage for every species that was possible. That part of my photography, meant it made no difference what birds were my favorites, and what birds were not. Every new species was a thrill for me.

20 minutes in 2008 with a couple of plain looking ducks called White-winged Scoters, was cause enough for me to celebrate. Getting stock of new species of animals, or new flowers or locations, sort of enlisted the philosophy of a hunter. I shot this duck about 50 times with my camera. 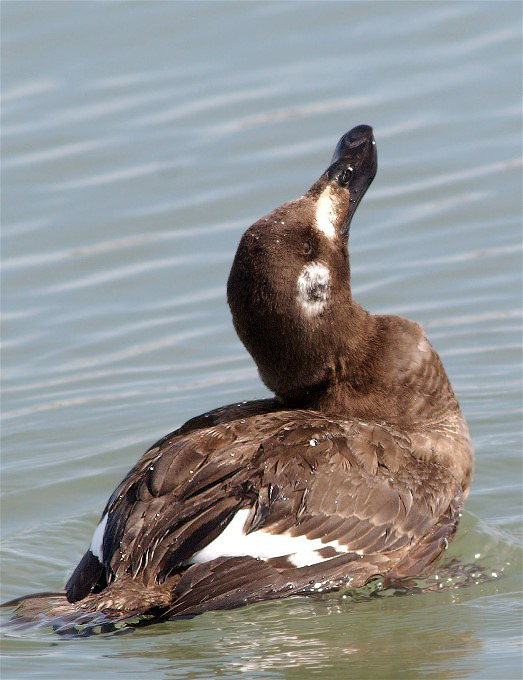