Posted on June 1, 2016 by nelsonearthimages

I thought for a change (sarcasm), I would offer my commentary to you. I also thought I’d stay away from some of my usual focal points of those opinions, such as politics and religion.

On my last post I dealt with the argument that many photographers offer, which is that it is wrong to give credit for powerful pictures to the camera equipment, rather than the photographer. I wrote that without a doubt, with “all things being equal” among photographers with top (or bad) equipment, the true craftsman and/or artists will prevail. Just the same, today more than ever the equipment does matter. You will fall flat on your face eventually, if you do not have cameras with great sensor resolving power, high mega pixel size, and noise confinement under high ISOs. You are able to do things that were impossible with previous models. That of course, is true with changing technology in respect to things other than photography as well.  Of course, knowing how to use that equipment, and having something to say with it, will eventually separate photographers.

Well, one big question that has been asked since the advent of digital photography, and to some degree since the first lens filters were created, and even of the (wet) darkroom techniques of some photographers, is that reality or an altered vision I am seeing in your photograph? Please note, that I am not saying that any photographer does not have the right to create an altered vision, that is a re-creation of nature or any other subject, only that it disturbs me that nobody even asks the question anymore. We are so used to distortions of reality, that in general, everyone just accepts it. They’re accepting that nothing is ever real anymore, so why care.

I have always been a photographic  realist, even when I created pure abstracts. My vision may seem anything but realistic, but is a natural part of a real scene. I do have digital creations and I have shared them with you over these many years, but I tell you they are altered realities. The problem is, that the subject matter still counts to many viewers.  They deserve to know how many filters you have used, and how many exposures were placed on that frame, and how many digital alterations were made at home.  If you are hoping for applause for your photograph, based on the “cool” subject, as well as your photographic expertise/art, then it should matter to you as well. Once again though, what really bothers me is that nobody asks whether the scene was found that way, or it is a creation of the photographer’s imagination.

I sometimes forget to tell you that the water is soft and dreamy in one of my pictures because of slow shutter speeds. I am not excusing my memory lapse, but it occurs because I do forget that everybody who reads this blog, is not necessarily an experienced photographer. At times I have forgotten to mention that a graduated filter was used to hold back the exposure across one portion of the picture frame. I have tried in recent years to make mention of such things. If I want you to appreciate my image, you have a right to know if it is as it was, or if it is what it wasn’t.

I admit that the farther some photographers remove themselves from real scenes, and the more their imagery becomes self-indulgent in nature, the less likely I am to believe my eyes when I see a wildlife picture or for that matter an image of that old farmer in North Dakota from that same photographer. Faith, is hard to come by, especially in this world. It has to be earned and it can be lost.

There is nothing like a lightening storm as God gives it to us, or a rainbow as it “really was”. That being said, it can be easy to forget to mention that the lightning shot is 10 exposures or that the rainbow has been added to in the digital darkroom. The pictures may be beautiful, but neither one approximates what the photographer was really seeing at the time of conception.

This rather ordinary (at best) looking picture of a rainbow, has never been shared before by me, because it is not very good.

I was in Door County, Wisconsin with my workshop partner. We always went a day early for our “shops” so we could scout the area for our students (always the most important thing), but also make some pictures of our own.

We were driving around looking for pictures and the storms came. The storms became heavy but we could see the sun trying to peak through. My first thought was rainbows. Surely the conditions were right. Years ago on film, I made some rainbow pictures one afternoon on the way home from an auto race I was to photograph, which had rained out. They also were not the best. This time I wanted to succeed.

We raced (by car) while looking towards the opposite direction of the sun, and sure enough, a faint rainbow began to appear. I suggested we look for something to put under the rainbow. The only thing of interest was a farm. I’ll take it…….I said. Just as we finally found a place to stop and set up, a double rainbow began to form. I threw myself out of the car and set up my equipment……..just in time for the double arch to disappear, and primary rainbow to weaken. To add injury to insult, I could not get the rainbow in a position to arch over the barn as well as the house. The composition here is uncomfortable, with the arch starting well into the picture frame and then disappearing into nowhere. With software, I have accentuated the rainbow a little as it was barely visible in the original.

It is right to share the bad pictures as well as the good.

It is debatable whether there is such a thing as a partial success, so we will leave this picture as a failure.

I am assuming that this white bunny is a domestic rabbit, but it is a cool shot none the less. Personalities can be shared in the click of a shutter. Ajay Kumar did the sharing on Google Plus.

What a gorgeous hummer. A clean and elegant image as well. The link I have provided you goes to the individual on Google Plus, who shared this picture. The photo credit on the picture suggests that someone else made the photo. I plugged that name into Google and found a website full of subjects quite different from hummingbirds. Subjects that do not belong on these pages. I tell you that because I did not want to remove the credit for the one who made this picture, and I also did not want any of you checking out the URL and being shocked.

It’s been way too long since I shared a photo from Facebook friend Marina Scarr. This mom and baby Barred Owl is a delight, as are all of Marina’s images. I miss photographing owls.

In general I am not a fan of symmetry in photography.  It can be much to static. That being said, I am more than accepting of it with this beautiful caterpillar image from Fabio Piscotta.  The curvature of the subject breaks up the bull’s eye composition of the image, and the diagonal stick adds some direction to the square crop. Anything but a simple image of this creature, would call attention to Fabio instead of the caterpillar. Well-done!! This image was placed in my Flickr Group, Earth Images. 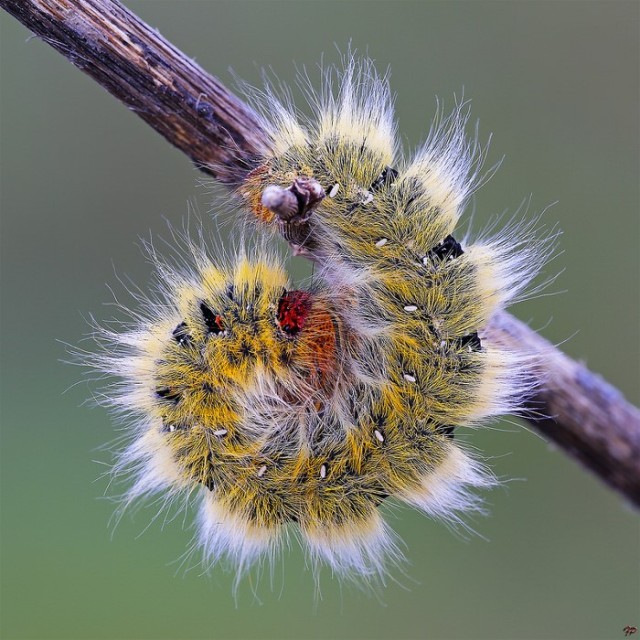 When I was just a kid, a lot of my buddies never quite understood me. Now that’s not surprising in and of itself. Like most people, they liked reasonably warm sunny days. Either that or some snow to play in. I loved those days too, but I also loved cloudy days, rainy days, storms including thunder and lightening. Bitter cold days (with enough clothing to go with it). The sky, the temperature, the light, they all affected the way things felt (mood), and the way things looked (the color of light). For all my life I’ve marveled at those things. I guess it was not surprising that I wound up spending 40 years in various forms of photography. I also always saw things happening in a stop action type format. A bird in flight, the rain falling, a race car at 200mph. It was the color of light, the mood of the seasons, and the idea of stopping a fraction of a second of life, forever, that kept cameras in my hands for such a long time.

I’ve never regretted my time in photography. My successes and my failures, and there have been many of both, have all been a part of my attempt to not only express myself, but to share with you some wonderful subjects.

Think about your journey in photography and understand why. The next time someone asks you why photography, you’ll have the answer.

This post was initially meant to be political commentary. I decided to switch to my favorite subject photography, because frankly my heart just wasn’t there for politics. It is however hard to ignore politics at this time.

If you have read this blog you know that I do not support any of the three major candidates for the American Presidency. Self respect and my love for freedom pretty much has taken care of any possibility of that.

Protesters at Donald Trump rallies that fight with (and injure) police and cause property damage are not protesters, they are thugs and low life criminals.  If you protest a Bernie Sanders rally and storm the stage, you too are nothing but a worthless thug. It is time for “everybody”, including “all” candidates, the condemn these actions.

Thank you I feel better now.