Posted on April 6, 2016 by nelsonearthimages

Today, let’s focus on the small side of the wild world. We’ll look at nature’s littlest wildlife, and also throw in some close-up views of other subjects. This is not meant to be a natural history lesson, which I would be average at best at teaching, or a photography lesson, of which I have taught many. It’s really about my personal thoughts and objectives when in the field observing (with my camera) the natural world up close, or my thoughts after the fact as I look at these pictures now. Most of the pictures below were made with Nikon digital (some 35mm) cameras, and my Nikon 105mm Micro lens, or Nikon 300mm Macro, a Sigma 70-300mm Macro (limited) zoom, and on a few occasions, Nikon extension tubes. Of course either a sturdy tripod or a dedicated flash was also employed.

One of the first subjects that attracted me to close-up nature photography, was butterflies. I think for most photographers who want to pursue the photographic capture of little critters, butterflies are your first subject. These “flying jewels” are not only beautiful, but they are gentle and (my opinion) natural art. 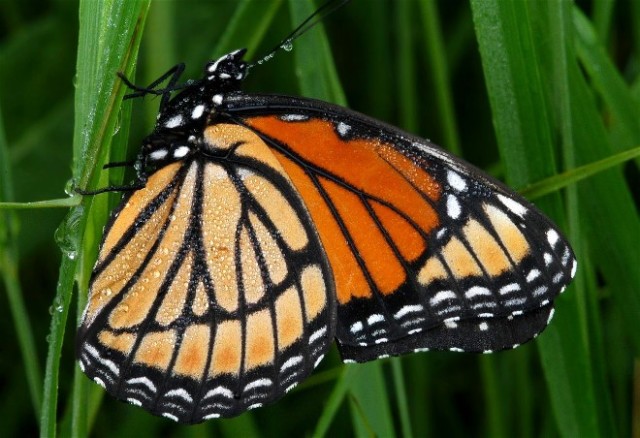 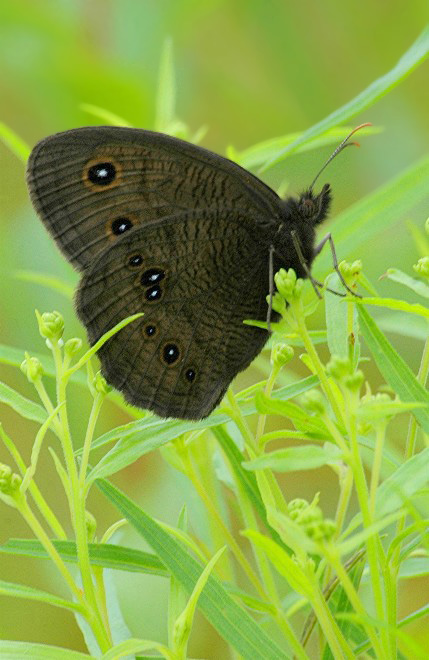 When I was out working with a particular species of butterfly ( and other subjects), I always looked for pictures that told stories. After almost two days of image making with a group of Tiger Swallowtails, who were almost always perched on Joe Pye Weed flowers, I was actually relieved to see the older and warn out butterfly in the third image below. No butterfly lasts forever and this Swallowtail showed the effects of time. 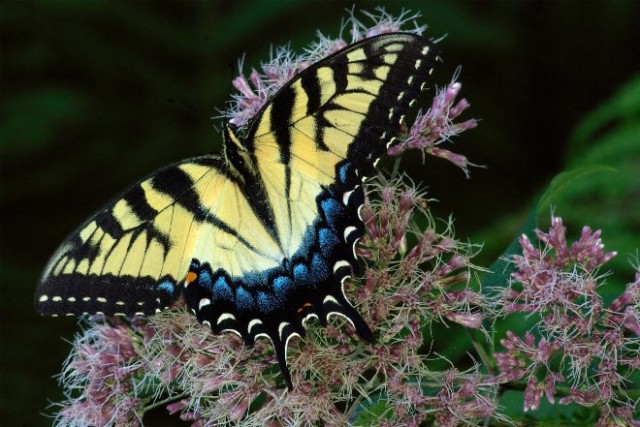 One thing that the digital age brought the macro photographer, was the technology, through software, to make creative alterations to our images. I make very few alterations, and when I do they are either extreme and obvious like with this Little Yellow butterfly in the second picture, or subtle as in working with contrast or exposure.

After mastering some of the techniques of butterfly photography, I began including dragonflies in the mix. I found these creatures to be quite different in their behavior than were the butterflies.

Butterflies flit around (sometimes slowly), and perch and take nectar from flowers. Dragonflies are predators and must hunt for prey. Some hunt on the wing, but thankfully many hunt from a low level perch. Perfect for photography. They frighten away easily, but if they have a favorite hunting perch they will return over and over again. Plenty of time to focus and shoot, over and over again. I was always looking for behavioral shots including mating ( often times very easy with dragons), but I’d take a “beauty shot” of a interestingly marked dragon any time. 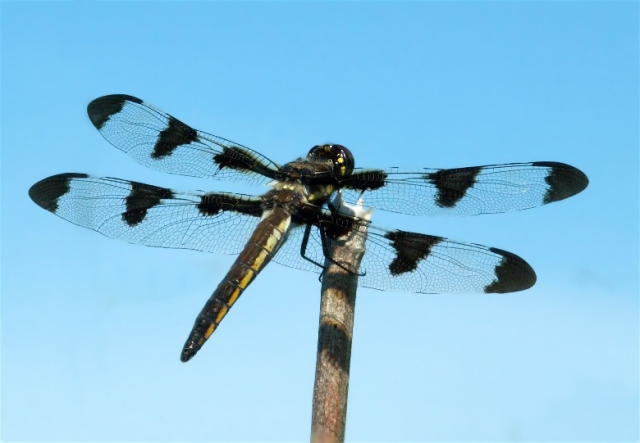 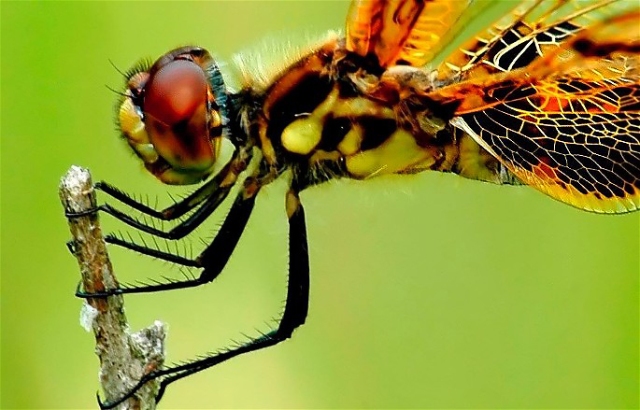 Both butterflies and dragonflies take practice (and knowledge) to photograph, but they are well worth the trouble.

I must admit, it can be relaxing and fruitful making mages of beetles, slugs/snails and caterpillars. They tend to move slowly giving you a variety of compositional opportunities. With having been said, they will take any opportunity to move away and hide, when your back is turned. I have spent many a morning, looking at the backside of leaves, and finding caterpillars, slugs or beetles slowly crawling or eating under the cover of those leaves. 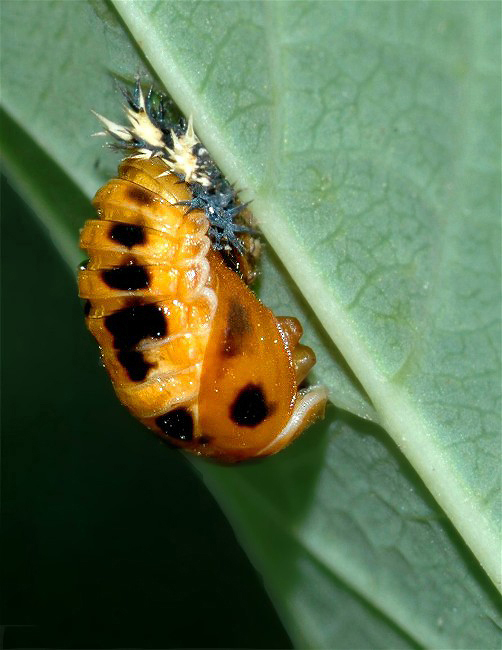 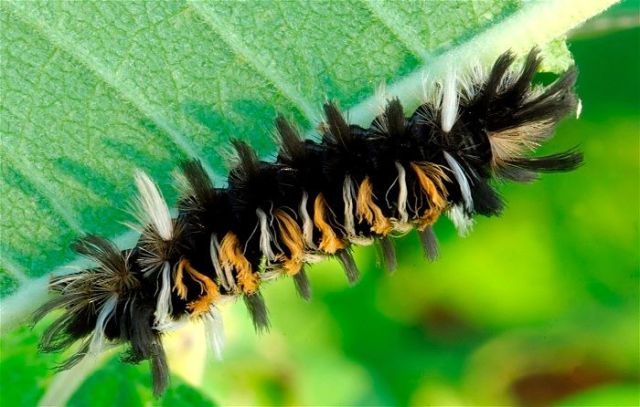 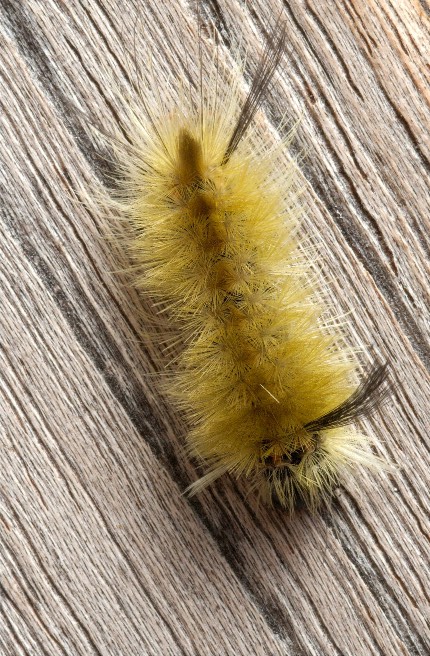 It pays to remember that all animals, including nature’s tiniest, have stories to tell. Sometimes backing off a little helps to tell those stories.

Monarch Butterfly Caterpillars have a life-long symbiotic relationship with Milkweed plants. Adult female butterflies lay their eggs on Milkweed plants. The caterpillars that hatch from those eggs spend their larval life eating the leaves of this mildly toxic plant. That will serve them well in later life as it will produce an unpleasant flavor that cause alarms to go off for birds and other creatures, forcing them to then reject them as a dinner. Their color scheme and patterns will send them that signal. After metamorphosis, when those adult butterflies begin to fly from meadow to meadow on their incredible journey south, they will also often return to Milkweed plants to take nectar (energy) from the flowers. 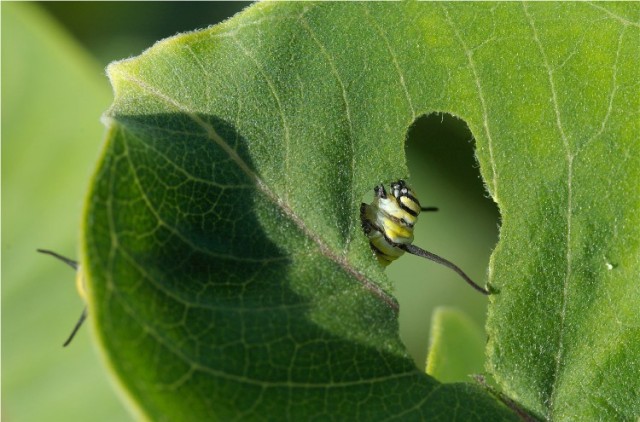 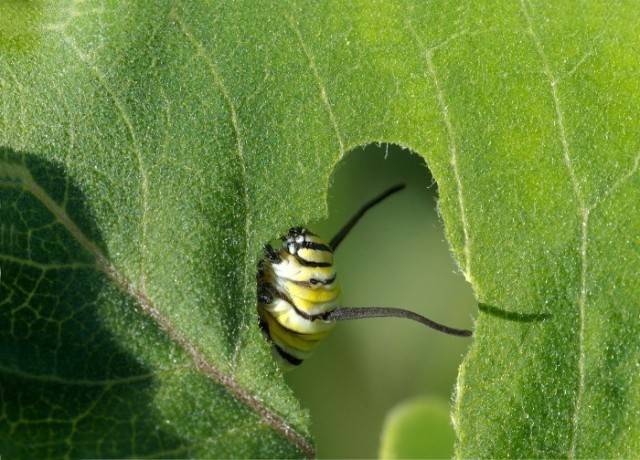 It’s seldom we think of a creature like a caterpillar and potential abstracts subjects as one and the same, but a hairy caterpillar covered in morning dew, can be just that. 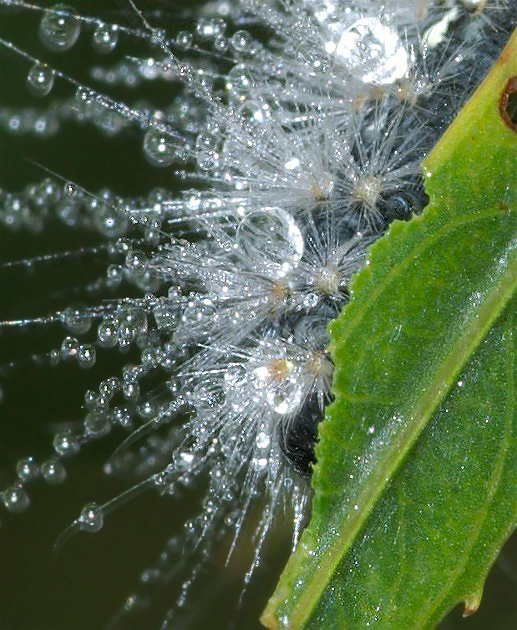 Spiders are fascinating subjects. They are as varied as one could imagine. Whether they are translucent Goldenrod Spiders, a female Forest Wolf Spider with an egg sack, or a tangled group of Daddy-longlegs, fighting over some sort of meal, I always found them to be an interesting subject. 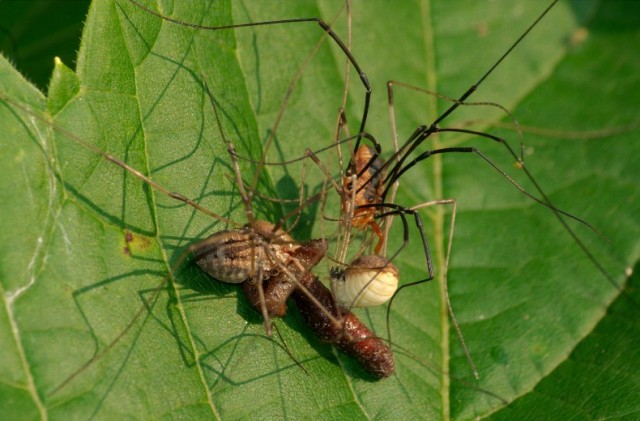 Even active, hard to photograph insects like grasshoppers, have to stop to rest and eat. On occasion, I have been permitted a very close approach, but never overlook image cropping as a viable tool.

The more time you spend crawling around looking for things, the more things you will find. That sounds obvious but the point is, don’t give up. If you can’t find what you want, photograph something anyway. Anything. A thousand times or so it seems, I had finally given up on my preferred subject, and just decided to make some pictures of something else, and after a few clicks of the shutter, sure enough there was an interesting subject right next to me just waiting for me to take its picture. It was very often exactly what I was looking for in the first place.

I was photographing close-up images of stones or some such thing when I found this Field Cricket right next to me. It was covered with sacks of aphids, and literally being eaten alive. Nature can seem cruel, and every story is worth telling.

Flies, whether they be pretty little Hover Flies, or prehistoric looking biting flies, make great photo subjects. Whether they hunger for nectar like the Hover Fly, or they scavenge dead animal materials as I would imagine the second fly does, they make great macro subjects. 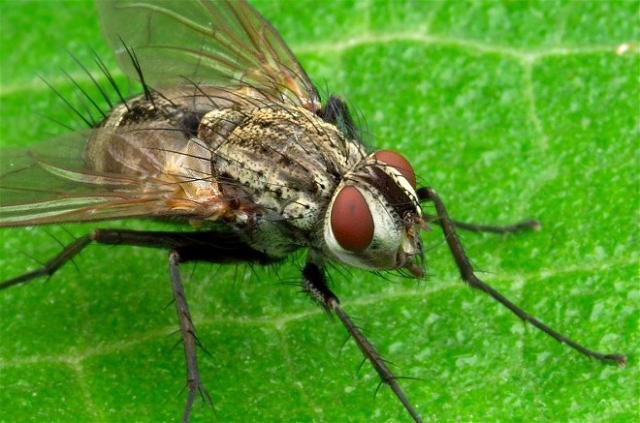 Nature provides us a myriad of potential close-up subjects and I tried to take advantage of most of them over the years. Flowers are a common but spectacular macro subject. I show flower close-ups for arts sake all of the time on these pages but some species are rare and important in and  of themselves.

The White-fringed Prairie Orchid is one of those flowers. After two previous experiences several years earlier, on windy days with a hot blazing sun, and no wind breaks or sun blocks with me, I was happy to have a moderate wind and an early day sun on this final attempt to photograph the species. With only two plants to work with I did what I could to at least provide different backgrounds to display them. I have made far more artistic renditions of flowers in my life, but there is nothing like capturing images of an endangered species to bring out the naturalist in me.

One of my favorite subjects ever, was that of the dewy spider web. They are a nightmare that is well-worth the effort. In the past I have spotted a dewy web at 30 feet, and knocked the dew of that web while still 30 feet away. Every plant that a web may reside on, is touching another plant, which is touching another plant, which is touching another plant, and so on and so on. Take every step slowly and carefully, stepping high and oh so slowly putting down your foot……and of course, the feet of your tripod. When you finally get there, and you see the picture in your frame, it’s all worth it as well. In the case below, by moving  I was able to place a dark shadowy section of meadow in back of my subject. Then a little added contrast to separate the web and the background, and there you are. 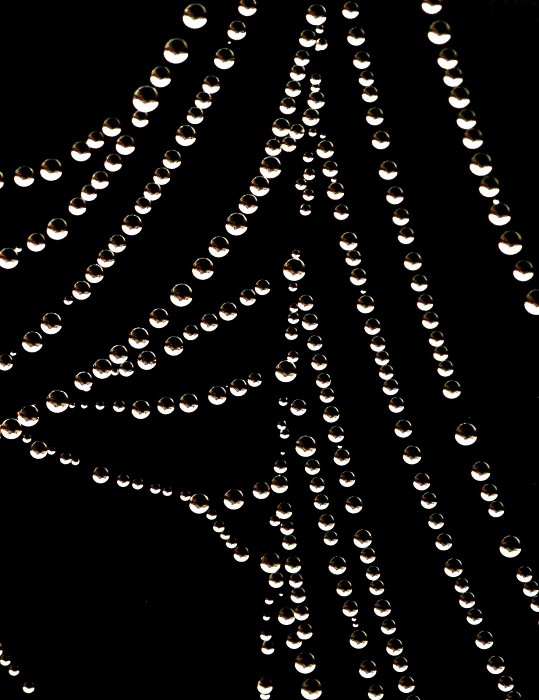 Close-up work in nature can produce mini scenes or landscapes. I was always on the look for those opportunities. So did I find that leaf, and then find the moss, and create the scene by combining them? No but I did move the leaf just enough to straighten it out. Nobody’s perfect. 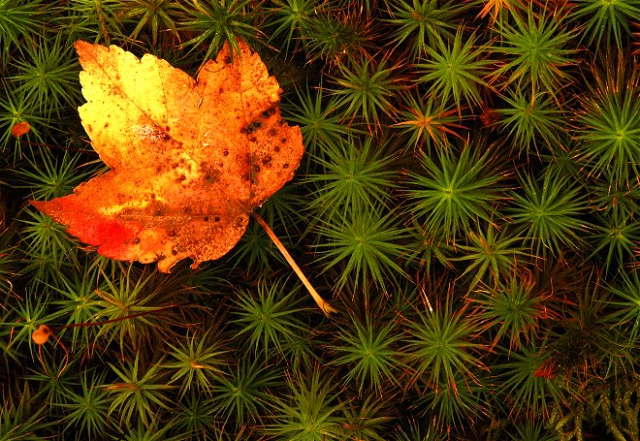 Our most common subjects can make for great pictures under the right circumstances. These are wild grasses after a rain and they offered up many compositional choices. 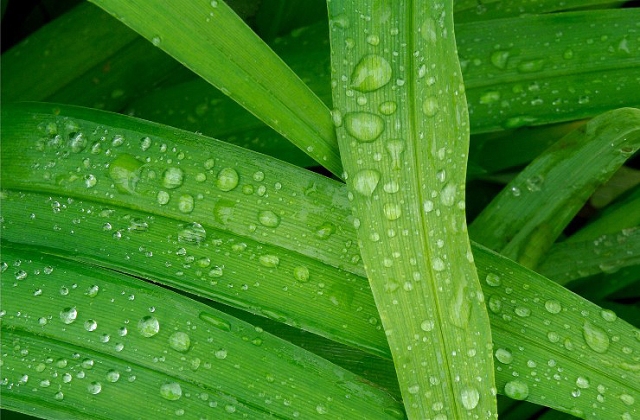 The struggles that occur with making enough depth of field at close distances, can be used to make abstracts out of very common subjects such as leaves. Was one fraction of an inch of sharp leaf edge enough to make this picture worth the effort? If it was worth it to me. Every picture we make does not have to be popular with others. Even if you’re in the business of art prints, or stock sales, always make some images just for yourself.

This amazing spider (Phidippus regius) picture was made by Juraj Komar

The macro season will soon be heating up. No matter what kind of image making you’re currently practicing, macro photography will reward you with images you never dreamed of.