Posted on August 21, 2015 by nelsonearthimages

I write a lot about special places. To me, special places are really special friends. When I am not there, I wonder how they are doing and what is happening in my absence. Many of my special places are little known or even unknown to anyone but me, but some are famous or at least they are shared by many others. I once wrote (with picture) for a yearly special edition of Nature Photographer Magazine about my love of a little meadow next to a river that exists only a couple of miles from my house.

Lately, I have been missing Theodore Roosevelt N. P. in North Dakota. She (Theodora ?) is not one of our more famous national parks, but she is still a place I need to share with others. I have had two brief encounters with this wild, rugged lady, and never made it back to spend the time necessary to really get to know her. If you get the opportunity, stop and visit with her. Enjoy her beautiful landscapes, from the rugged and colorful rock hills, to the lush green Missouri River Valley. They call this the Badlands of North Dakota comparing them to the Badlands of South Dakota. That concept was born in the mind of someone who thinks all rock looks the same. This place is very different from the Badlands of SD. If you go there say hello to the Prairie Dogs, grouse, Bison and wild horses that live in her valleys. Above all, tell her I miss her and wish I could have known her better. The good ones always get away.

As a wildlife photographer, I have found that quite frequently animals that have no relationship to each other, present similar challenges.

Rabbits and crows are very different critters. Rabbits are mammals and vegans, crows are birds and omnivorous scavengers who will eat anything. One has fur and the other feathers. Despite their many differences, they offered up challenges that were pretty similar  to this wildlife photographer. They are both plentiful in numbers and they can be seen everywhere from cities to the wilderness. Crows are out all day, and at certain times of year, so are most sorts of rabbits. Both types of animals can be cautous and hard to photograph.

The best time to acquire rabbit pictures is when mom kicks them out of the lair.  They are somewhat lost and dysfunctional while they attempt to establish their own territory. These rabbits or bunnies as I call them, are a bit on the dumb side, and often willing to tolerate a close and long look from you the photographer. Using a car as a blind/hide is of course your best bet. I have found Eastern Cottontail bunnies that would put up with me for over 30 minutes. It is their lack of life’s experience that makes them tolerate you, and of course many, many rabbits will pay the price for that with their lives. The young rabbit pictured below was tolerant enough that it actually became curious and came closer to me. When I finished my photography, I thanked my subject as I always do, and then I screamed at it and clanked the side of the car. I didn’t do that so other photographers would not have this close approach.   As always, I want all photographers who carry with them a strong ethic towards wildlife, to get great pictures of everything. I scared the young rabbit so it will learn to be fearful and leery of everything, including automobiles.

Crows are group birds. A “murder” of crows is an extended family that sometimes also includes an outsider or two. They form what is very similar to a wolf pack. They keep watch for each other and while they don’t fear you, they still don’t trust you. Members of the crow family rank equal to members of the parrot family in intelligence. They can count or at least keep track of the number of humans that are in their presence. If there were five people and now there are four, they are watching to see where that fifth person went. With all of that said, persistence pays off with crows. You can fail 20 times in a row, and suddenly one murder of crows will accept you. Just what their criteria is, is only known to the crows. Once they have decided that you are OK, you can clunk around, make noise, and do everything but walk up to them. You feel like you are special, at least in the world of the crow.

A crow on a wire is a common sight. Crows are a very difficult bird with which to capture feather detail, but the sun at just the right angle, with a blended exposure, gives you the best chance. I did not attempt to scare the crows when I left, because their intelligence levels are so high that I believe they can figure out for themselves who to allow into their world, and who to keep out.

Peace in The Valley

Monument Valley Utah/Arizona is a peaceful serene place to work. Even though it receives heavy visitation, it only takes a short walk from the only dirt road to feel that those beautiful sandstone rock forms are your only company. The variety of shots possible are infinite. You and your imagination are the only limits.

When doing straight forward landscapes in the valley, look for some of the lesser known formations. You not only will be making pictures of areas that others ignore, but you will be away from the crowds. Ron and I were fortunate in the single day we spent there, we had almost every kind of light and sky imaginable to photograph a wide variety of rock forms with a wide variety of moods.

The great thing about the high desert in that part of the world, is that the rock itself is a great subject. There is nothing more inviting and enjoyable to me, than isolating portions of rock and abstracting the patterns. Working with the rock in the shadows of late afternoon adds  another dimension called mystery. 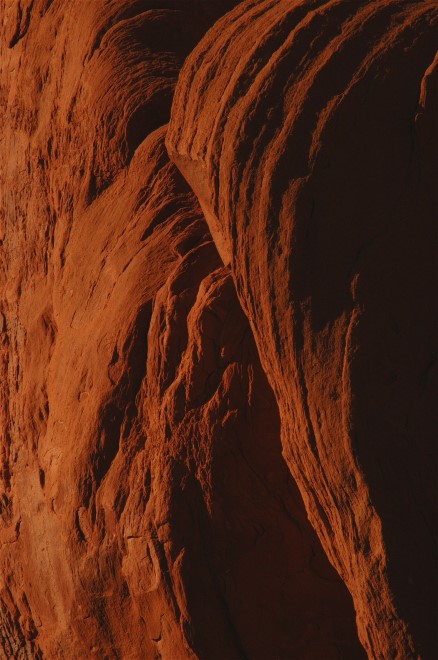 If you’re fortunate enough to travel even a little bit, never judge a place until you have immersed yourself in it. Almost everywhere is beautiful at the right time, and when you are at a location that lends itself to the best of all types of image making, be grateful and let your creative side take over.

I’ve never been someone who remembers his dreams vividly. When I have an interesting one, and most of them seem to be, the moment I wake up I start recollecting the dream and then my memory of the recollection will carry me through forever after.

Many of my dreams are either work related, regardless of whether it has anything to do with any job I have held, or they’re nature related. Those work related dreams are always either scary or sad. The nature related dreams have me in the mountains or deserts or forests, and even if I am hanging from a cliff, they are good. I have had maybe 10 nature photography related dreams in my life, as far as I can remember. Sometimes they involve people I know, and they can be either happy or sad dreams.

A few days ago I had a bazaar dream in which I was working for somebody, and was out on the road driving, and all I can remember is, that everything was going wrong. Finally I got back to where my bosses were, and I was told to show them the pictures I made, so they can decide my fate as far as keeping the job was concerned. I was happy as I knew I could please them photographically. I got out my (film) camera, and could not figure out how to open the back. They were watching me. Finally I got the camera (35mm) open but I had neglected to rewind the film, and the light hit the open camera and ruined everything. I thought I was done but they ordered me to switch the camera over to digital, and stated we’ll use that instead. I did not know how to switch the camera, and I did not know what digital meant. I woke up and immediately thought about the dream so I would remember my remembrances….so to speak.

It has been almost one year since I made my last picture. That is the longest I gave gone since 1971. I said 1971. I used to make fun of my photography friends if they went two weeks without making pictures. It is clear (to me at least) that I am not only feeling separation anxiety from the world of photography, but I am falling behind in knowledge with the latest cameras and software programs. I guess I always knew that would happen eventually.  There is no substitute for being in the field and doing it.

I thank you for being my therapist, since I am not a believer in modern psychology.

Being “a dreamer” in life (not sleep) is good as long as you pursue the dreams that you dream. In other words, everything good is imagined before it is accomplished. Be it a daydream, or a sleep dream, I do believe there is a lesson to be learned and a point to be made with every vision we have. My daydreams are a thing of the past, so I guess I’ll wait for my next night dream to expose my fears, and feed my joy.